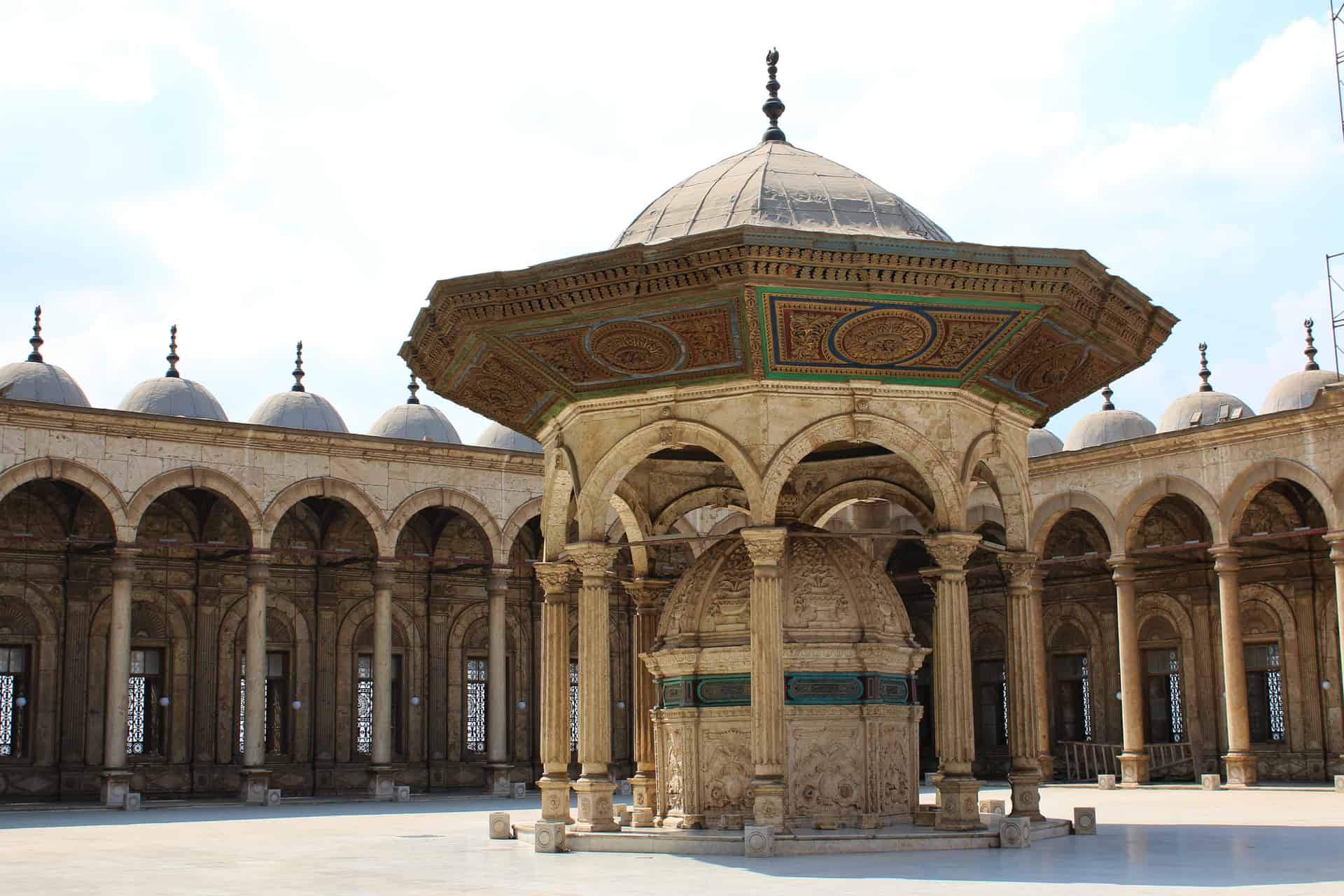 The Muhammad Ali Mosque can be found in Cairo, Egypt’s capital, which is a tapestry rich in a trove of antiquities and historical sites, with a mesh of the past and the present coming to life. Its history starts three centuries before the Fatimids had founded the town of al-Qahira, with the Arab conquest of Egypt in 640 CE.

The city was born over about six centuries, where it evolved over different phases: it was established by the Arab conquerors as Fustat in 642 CE, and was the first capital of Egypt under Muslim rule. Later in 969 CE, Cairo (al-Qahira in Arabic) was founded by the Fatimid conquerors, and the Salah el-Din Citadel was established in 1176 CE.

Situated on the summit of the Salah el-Din Citadel is a Cairo landmark marked by its size, dominating location and unparalleled contribution to the city skyline … the Great Mosque of Muhammad Ali Pasha—AKA the Alabaster Mosque—which is one of the largest mosques built in the first half of the 19th century. It is one of the landmarks of Cairo that should definitely be on your tour for its spectacular architecture. It is known as the Alabaster Mosque since its walls are made of alabaster, a beautiful white marble-like gypsum.

Overlooking the City, the Mosque was built in a classical Ottoman imperial architectural form, breaking away from the Mamluk structural and decorative style. Not only did it follow the Ottoman style, but its architecture included a number of European elements that were popular in Istanbul in the 18th century. This mesh of styles came to be known as Ottoman Baroque.

Muhammad Ali was born in 1769 in Kavala, Macedonia, Ottoman Empire (now in Greece), and was probably of Albanian origins. He was born into a family where the father, Ibrahim Agha, was the commander of a small provincial military force that was maintained by the governor of Kavala. He died early leaving Muhammad Ali a young boy to be brought up by the governor.

In the troops sent to Egypt to free the country from Napoleon’s three-year French occupation (1798–1801), Muhammad Ali was a soldier who fought in the battle of Abou Qir in 1799. He was promoted later in 1801 to become the commander of the Albanian troops. He became pasha and viceroy of Egypt in (1805–1848). He ruled Egypt from the beginning of the 19th century to the middle of the 20th century.

As founder of the dynasty, he encouraged the emergence of the modern Egyptian state. However, his policies were designed mainly to consolidate his rule, as well as his successors’, in Egypt more than to create a new society. In 1848, Muhammad Ali died and was buried in the Mosque.

History of the Muhammad Ali Mosque

The Muhammad Ali Mosque was established during a power struggle in the Ottoman Empire, at a time when Cairo was just emerging from relative provincialism to which it had been relegated since the Ottoman conquest of Egypt in 1517. And through the foundation of this Mosque with references to the Ottoman past and the independence from the Ottoman present in the Mosque’s style, there was an intended expression of Muhammad Ali’s aspirations for power.

He probably aimed at asserting his aspirations to take the place of the Ottoman Sultan and relocate the capital of the Empire from Istanbul to Cairo. Meanwhile, he wanted to revive rather than destroy that symbol since he saw that classical Ottoman architecture represented the most revered image of power.

The initial plans of the Muhammad Ali Mosque were designed by Pascal Coste, Muhammad Ali’s French chief engineer and architect in (1818–1827), in the neo-Mamluk style, which is contrary to his master’s expectations. However, Coste left Egypt and the project went uncompleted.

Had it been implemented, his design would have made a wrong representation, a different one than that intended by Muhammad Ali. It would have connected Muhammad Ali to the Mamluk legacy that he had eradicated in 1811 in what is known as the Massacre of the Citadel.

Later in 1832, the work continued on Coste’s foundations but adopting an Ottoman style and no sign of a Mamluk style, where Muhammad Ali wanted to make sure he had replaced the old with the new. Even though the Ottoman system was acknowledged in its architecture, Muhammad Ali seems to have defied the Ottoman system by adding the Turkish imperial style as an expression of sovereignty.

Architecture of the Mosque

The Mosque of Muhammad Ali has a great central dome, 21 meters in diameter, surrounded by four small domes, one for each corner, and four semicircular ones, one on each side, all silver crowning the Citadel. On the western side of the Mosque we find two towering cylindrical minarets tapering into the sky, 82 meters high, of a Turkish style. The two minarets have two balconies and pencil-shaped caps. These two minarets are also considered a signal of defiance to the Sultan’s authority since minarets were exclusive to the Ottoman sultans.

The whole interior of the Muhammad Ali Mosque is sheathed with alabaster instead of marble, where Muhammad Ali wanted to stimulate a fading local industry. The walls and pillars are all made of this beautiful material.

The interior is decorated with vegetal and geometric motifs and inscriptions. Muhammad Ali wanted his Mosque to be bigger than anything built before. To that end, he had inside a spacious space 41 meters squared in size, and it can hold up to 6500 people. Around the dome there are six large medallions with names of God, Muhammad and the first four Caliphs: Abu Bakr, Umar, Uthman and Ali, engraved on them in gold.

The Muhammad Ali Mosque encloses two minbars, the larger one is made of wood decorated with gilt, while the smaller alabaster one was gifted to the Mosque by King Farouk later in 1939. A Cairene feature it is going back to the Fatimid times, the mihrab niche deeply protrudes towards the outside of the Mosque. To the right of the entrance there is a bronze grille behind which Muhammad Ali is buried under a magnificent white marble cenotaph.

Vaulted galleries made entirely of alabaster surround the courtyard. There is also an ornate copper gingerbread clock on the west side of the fountain that was a gift to Muhammad Ali from Louis Philippe in 1846 in exchange for an obelisk from Luxor Temple now placed in the Place de la Concorde in Paris. However, this clock arrived damaged and it never worked.

Many have been disappointed, though, by the mixture of Turkish, Islamic and even pharaonic styles in the design of the Mosque, believing that however impressive it is, it seems empty. French writer Pierre Loti remarked that the whole Mosque had been transplanted from Istanbul. Also, William Thackeray, one of those who witnessed the establishment of the Mosque near its completion, wrote in his From Cornhill to Grand Cairo,

“The great lion of the place is a new mosque which Mehmet Ali is constructing very leisurely. It is built of alabaster of a fair white, with a delicate bluish tinge; but the ornaments are European—the noble, fantastic, beautiful oriental art is forgotten. The old mosques of the city, of which I entered two, and looked at many, are a thousand times more beautiful”.

Meanwhile, the view from the Mosque is spectacular. Florence Nightingale, an English social reformer, statistician and founder of modern nursing, was overwhelmed by the view, saying it was,

“The finest view in the whole world. Cairo, which is immense, lies at the feet, forests of minarets and domes and towers. The Nile flows his seldom course beyond … and the three pyramids stand sharp against the sky. Here Osiris and his worshippers lived; here Abraham and Moses walked … here perhaps, our Saviour’s mother brought her little son to open his eyes to the light. They are all gone from the body; but the Nile flows and Pyramids stand there still”.

The Mosque of Muhammad Ali is definitely an attraction you should consider visiting on your tour in Cairo. It is beautiful from the inside as it is from the outside, and you will get to explore one of the architectural jewels in Cairo.