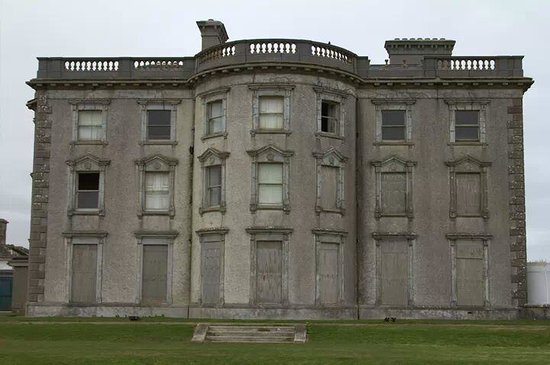 Originally the house was a castle but replaced the castle in 1350. It was known as Redmond hall as the original family who owned the hall were called Redmont. It changed its name when the Loftus Family from England bought the house in the 1650s.

Throughout the late 18 hundreds and the 19 hundreds, ownership of the estate has changed multiple times after the estate went bankrupt in 1889. Some of the previous owners include an order of nuns, a girls school and is now owned by the Quigley family who bought the estate in 2011.

The hall has a rich haunted history with many people referring to a story called ‘The Legend of Loftus Hall’.

Legend has it that a stranger approached the house on horseback during a storm at sea nearby. This stranger was taken in by the Tottenham Family who lived at the estate. A young family member of the Tottenham family, Anne fell for the stranger. One night during a card game, young Anne made the discovery after dropping a card, that this stranger had hoofs instead of feet.

Upon realising this, the stranger burst into a ball of flames and shot through the roof.

Young Anne was left heartbroken and in the shock, her family locked her in a room, where she later died. Her family reported seeing her around the hall at night. Her family later got a local Catholic Priest to exorcise the hall but couldn’t exorcise the tapestry room. The room in which Anne died.

When the Loftus Family bought the estate in 2011, they re-opened the hall to the public after renovations. Visitors can book tours of the hall throughout the summer and Halloween.

Visitors to the hall claim to feel and see paranormal activity in the hall. There is also a real eerie feeling around the hall and its grounds, with many eerie hotspots around the house. Different parts of the hall have different atmospheres, temperatures and the feeling of unease.

Unfortunately, the hall isn’t opened all year round. Visitors can visit Loftus Hall throughout summer months and Halloween.

*Children need to be aged 5 or over. Concessions need to either have a student card, senior or have a valid carers card.

Killarney Ireland: A Place Filled with History and Heritage - An Ultimate Guide of the Top 7 Locations