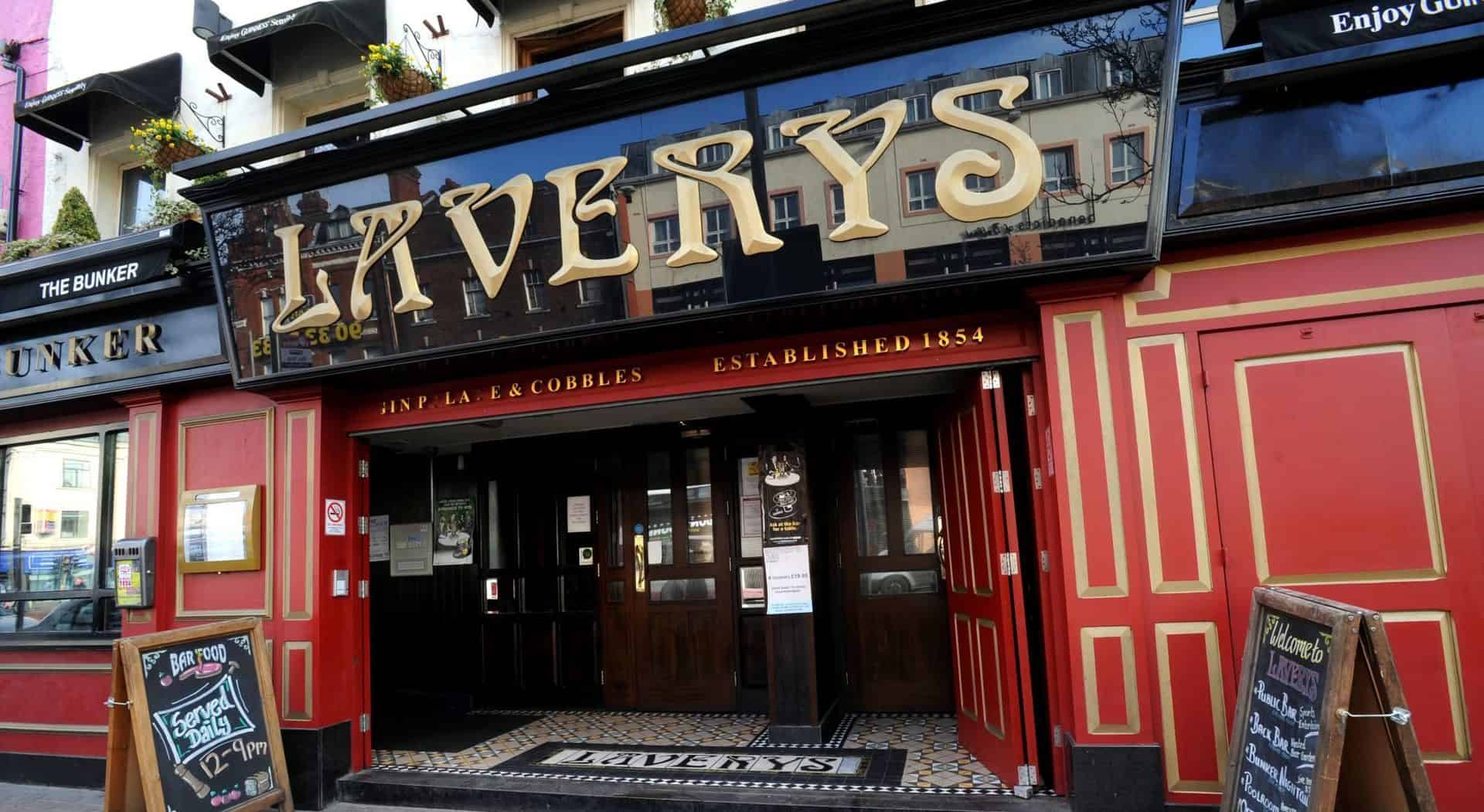 Belfast is an exciting city to visit, a place that is home to some famous bars, one being everyone’s favourite ‘Lavery’s Belfast’. This timeless bar has long been an important part of the social life of Belfast for a remarkable 100 years. Laverys Bar is also famous for claiming the title of the oldest family-run bar in Northern Ireland.

Located in the heart of the city, no night out in Belfast would be complete without stopping by Laverys to enjoy a pint, a game of pool or the delicious food available in its two fantastic restaurants; the Woodworkers and The Pavillion.

Not forgetting Lavery Belfast is home to four unique but exciting venues all under the one roof with the promise to offer something for everyone at this beloved Belfast bar.

Keep reading to find out more about Laverys Bar, its alluring history and what you can enjoy on your visit.

Having the title of Northern Ireland’s oldest family run bar doesn’t come without a fascinating story that begins in 1918. The Lavery family purchased the Belfast bar which was originally called Kinahan from two brothers. Kinahan was used as a spirit grocer (a drinking place) and a popular stagecoach stop for the Belfast to Dublin Bus service.

Soon after the bar was taken over by its new owners, the bar name changed to ‘Laverys’ after the family. It would quickly become one of the best- established and iconic spots in Belfast City Centre.

The facilities at the back of Laverys Belfast were originally used as stables and horses would come here to change, which also provided people visiting the area an opportunity to stop off at the bar for some drinks and refreshments.

The Lavery Family and the Hospitality Business

The Lavery family were very successful in the hospitality industry, having owned around 30 bars in Northern Ireland at the time. However, due to the First World War, their stocks were bought over due to the shortage created from the war. Once the War had finished, there was only five bar left in Northern Ireland run by the Lavery brothers; Tom, Charlie, Patys and Donal. But eventually, ‘Lavery’s Belfast’ was the only bar to remain after the Northern Irish troubles.

A Troubling Time for Laverys Bar

In 1972, when the ‘Troubles’ were in full swing within Northern Ireland, Lavery’s bar was the target of an awful arson attack that nearly killed Tom Lavery, who at the time was living in the small flat above the bar.

Two of the Lavery brothers, Tom and Paty were joint owners of the bar at the time, rebuilt the place in 1973 as they believed the bar had so much potential in Belfast. In the late seventies, a new generation took over ownership of Laverys Bar, this was of course, Tom and Paty’s sons; Charlie and Patrick.

Lavery’s bar was quickly growing into an exciting place to socialise in Belfast. In the ’80s, the new owners even decided to renovate Tom Lavery’s old flat upstairs into a further two more bars.

Business was booming for the Lavery family and the bar saw a further renovation three years later, this time rebuilding the back bar and extending it through to the Middle Bar and Attic Bar above it. Not long after, they bought the shop next door and combined it with their current property, helping to increase the bar sizes as well as adding offices.

In the current 21st century, Laverys Belfast has continued to be improved and changed to keep people excited. It is home to a brilliant beer garden,  great pool facilities and renown as one of the biggest sports part in Northern Ireland. The bar offers the best of both world with its causal bar downstairs and its lively night club upstairs.

Lavery’s bar is a great place to visit, located in the dynamic Queens Quarter a versatile bar that provides a lively entertainment and music venue as well as the appeal of a traditional Irish pub.

The Woodworker and The Pavillion

Lavery’s Belfast is home to two contemporary restaurants, priding themselves on creating the best of traditional and modern dishes in Belfast. Both restaurants offer appetizing and tasty dishes to choose from that will make you want to come back for more.

The Pool Room at Laverys Bar

On the very top floor of Laverys, you’ll find the biggest pool room in Northern Ireland. Laverys Bar offers 22 excellent pool tables, providing a superior experience from both casual and club players. One of the pool rooms has six quality tables with its own rooftop smoking area with a cool music vibe and quirky lighting to add to the atmosphere.

A second pool room can be converted from the loft nightclub at Laverys providing a private pool experience from up to 100 people.

Laverys Back Bar and Beer Garden

One of the best things to love about Laverys is its outside bar and beer garden that has become one of Belfast top alternative live music venue. Music has always been a huge focus at Laverys, where you’ll regularly find free entertainment, live gigs from some of the most exciting bands around Ireland and further afield.

See the video below of the back lane roof garden being built. (Video Source: Lavery’s Bar Belfast Vimeo)

A Belfast Bar Not to Pass Up

Make sure to add Lavery’s Bar onto your list of attractions to see in Belfast, its four bars all offer something to excite people, whether you’re looking for a nightclub experience in Belfast to a comedy night as well a place to chill in the evening then Lavery’s Belfast is definitely your place.