The Famous Tradition of Irish Dancing 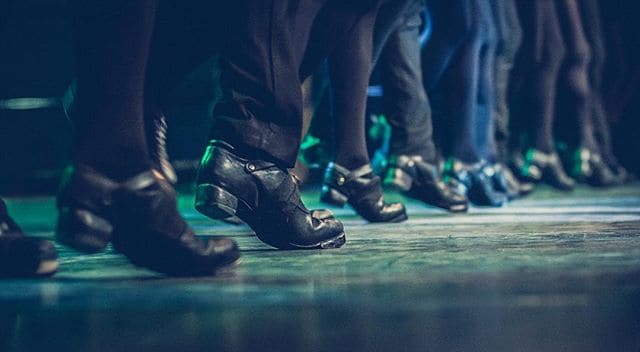 Irish Dancing or Irish Dance is one of the most famous and much-loved traditions that has come from Ireland. Irish dancing is a variety of traditional dances the composes of solo and group dances.

Irish dancing is a huge part of Irish culture and heritage and over the last decade, the tradition has grown in popularity with new generations. The newfound revival can be related to the success of Riverdance.

However Irish dancing was around long before Riverdance was ever a thing. For many people in Ireland, they took up Irish dancing as a fun activity as children and continued to enjoy it as adults. Irish dance has always been a huge feature in Irish themed events such as St. Patrick’s Day.

What makes Irish dance so special is it’s completely different from modern dancing – it has its own unique form of dancing that’s captivated people for decades. We are going to explore everything you could possibly want to know about Irish dance starting with its history.

Although people are somewhat unsure when exactly the origin and roots of Irish dancing came. There is evidence that suggests its links to the Celts and the Druids. The celts were sun worshippers who had their own folk dances. While many of the religious rituals of the druids also involved dancing.

The celts would dance within a circular formation of stones which has similarities to the circular formation we see in many Irish dancing sets. At the time these types of dances were common throughout mainland Europe. However, it’s still very different from the traditions of Irish dancing but there are patterns and formation that can be seen. Such as the Celts would often repeatedly tap one of their feet which is a tradition we seen in the steps of Irish dance.

As you would expect dancing at the time was accompanied by singing and music, much of which took place on special occasions. One of the special occasions held by the Celtic community was a local celebration known as ‘feis’. It was a celebration of culture, art, music, dancing and a place where people could talk about storytelling, politics and other topics.

A huge feis called ‘Aonach’ (great festival) took place on the Hill of Tara, once a year. Its believed that the festival began over 1000 years ago. Even in modern times, there is still feis held all around Ireland. Today they are more with a celebration of Irish dancing and music, where Irish dancers compete to win medals and prizes.

Irish Dancing Inspired by the Normans

Another aspect of the history of Irish dancing comes from the Normans who invaded Ireland during the 12th century. When they settled in Ireland they brought many traditions of their home and dancing was one.

One of the popular Norman dances was the ‘Carol’ and soon they began to perform the dance in the Irish villages and towns. The dance involved a group of people dancing in a circle with a singer in the middle. It was the earliest reference of recorded dance in Irish history. For many centuries later in Ireland dance continued to evolve.

During the 16th century, popular dances started to emerge in Ireland. These dances were known as the ‘Irish Hey’, the ‘Rinnce Fada’ (long dance) and the ‘Trenchmore.’ Along with the tradition of circular formation, these dances incorporated line formations. The Irish Hay dance involved dancers chaining in and out of each other in a circle. It’s believed that the Irish Rinnce Fada was introduced in honour of the arrival of James II to Ireland.

Dancing continued to be an important aspect of Irish life and culture, dancing at religious ceremonies was still a thing. It wasn’t unheard of for people to dance around the coffin at an Irish Wake.

The Irish people’s love for dancing has always been well documented throughout time. An English author called John Dunton once wrote “on Sundays and Holydays, all the people resorted with the piper to the village green. Where the young folk dance till the cows come home. There was no occasion from which dancing was absent”.

History of Irish Dance in the 18th Century

By the time we reached the 18th-century Irish dance started to become more disciplined. The typical styles and formations of Irish dances that we see today were created in this century.

This is most likely due to the introduction of Irish Dancing Masters who travelled around Ireland to teach the unique dance to people. Group dances were at the forefront of these classes as it was an easy way to involve multiple people in one dance. And only the best dancers from each town or village were given solo dances.

These dancers were given their own section to show off their talents and dancing. When they danced, doors would be placed on the floor to give them a pretend stage and a good platform to perform. Soon a rivalry between the dancers from different areas begin and ultimately this led to the rise of modern dance competitions in Ireland. These dancing competitions still take place in Ireland and around the world today.

Creation of the Gaelic League

In the late 18th century the Gaelic League was founded in Ireland. After many centuries of British rule in Ireland, the purpose of the League was to help create a separate cultural Irish nation.

The Gaelic League helped to promote Irish culture in Ireland and dancing was one of them. With the help of the Gaelic League, they organised formal dancing competitions and Irish dance lessons. As well as developing the launch of the Irish Dancing Commission in 1930. The Irish Dancing Commission helped to regulate the popular form of dancing. Once the dance has its own organisation, it really took off, quickly becoming popular all over the world.

There are many different styles of Irish Dancing but for the most part, they are relatively formal and repetitive. Stepdance is a style that was developed from a variety of solo Irish dances. This includes well-known ‘modern’ stepdance mostly performed competitively. Also, old-style stepdance which relates to the style of dancing that took place during the 19th century.

Much of the style of Irish dancing involves quick foot movement and a strict set of steps to follow. Little upper body moment is involved in the dance.

This is definitely the leading form of Irish step dance which became very popular by the Broadway show ‘Riverdance.’ As well as other Irish dancing stage shows from the 20th century helped to make it a favoured form of dancing.

The main characteristic of modern step dance includes having a rigid torso and is mainly performed on the balls of your feet. Again this was a style that became very distinct from the 19th century. Modern step dance is performed competitively in a variety of countries.

This form of dancing is a tradition related to ‘sean-nos dancing’ also referred to as ‘Munster-style sean-nos.’ Old style dancing was first created in the 18th and 19th century by the Irish dance masters who would travel around Ireland teaching dance.

The dance masters helped to transformed both solo and social dances in the country. Modern masters of old-style step dancing today can often trace the lineage of the steps back to the dancers of the 18th century.

The Irish dance masters helped to refine and arrange Irish dance traditions. Rules then followed with old-style dancing such as how you should properly use body, arm and foot placements in the dance. Another rule was that dancers had to perform a step twice, once with the right foot and then with the left.

Old-style dance involved having your arms loosely placed at your side as you had limited space. During this century, Irish dance masters also helped to choreographed dances to certain traditional music which created solo traditions. The traditional music included  ‘Blackbird’, ‘Job of Journey Work’ and ‘St. Patrick’s Day’ which are still used in modern Irish step dancing.

For each style of Irish dance, there are two categories which they can fall under; soft shoe or hard shoe. Soft shoe dances include reels, light jigs and singles jigs that are classified by the timing of the music and step taken in each dance. Whereas hard shoe dances include the use of the hornpipe, treble jib and treble reel and traditional sets accompanied by traditions music sets.

Irish dancing costumes have long been a huge part of the tradition of Irish dancing. Back, in the beginning, the appropriate clothes to wear for an Irish dance competition was your ‘Sunday best’, clothes you would wear to church. Girls would usually wear a dress and boys a shirt and trousers.

As dancers started to excel at competitions and take part in more public performances they got solo dresses made of their own design with the colours of their team.  During the ’70s and ’80s, ornately embroidered designs on dancing costumes became popular and still are today. Solo dresses were created uniquely to each dancer, offering up a bit of personality to their costume.

Nowadays the Irish dancing costumes are more over the top and with Celtic inspired designs. Most female dancers today also wear wigs or have their hair in a bun with a hairpiece for competitions.

Costumes would come with either soft or hard shoes depending on the style of dance you were performing. Hard shoes come with tips and heels of fibreglass to add noise to the dance. Whereas soft shoes are leather lace-ups, also referred to as ‘ghillies.’ The boy’s version of the soft shoes is called ‘reel shoes; which featured audible heel clicks.

A trend when Irish dancing first started was to wear white socks with shoes which are still a tradition today.

Irish dancing costumes have long been an important aspect of the Irish dancing culture. Most of the beautiful laces and embroidered design on the dress are taken from the Book of Kells.

Typical instruments include the fiddle, the bodhran, tin whistle, the concertina and the uilleann pipes. When single dancers performed at competitions usually a solo instrument would be played. Check out some of the typical Irish dance music in the video below:

The Irish Dancing Commission began holding the annual Irish Dancing World Championship. It first took place in Dublin in 1950 but eventually outgrew its location. The World Championships began travelling around North and South of Ireland. From then onwards the competition continued to grow in popularity and moved around the world, even to this day. The competition has featured more than 6,000 dancers from an incredible 30 different countries.

It first came to light during an interval performance at the Eurovision Song Contest in 1994. It featured the now famous Irish dancing champions Michael Flatley and Jean Butler. What simply began as a seven-minute performance was turned it world renown show.

The stage show of Riverdance was first performed in Dublin, a short six months after it had appeared on Eurovision. The Broadway show toured around the UK, Europe and Newyork selling more than 120,000 tickets. For 15 successful years, the Riverdance production travelled around the world before a final farewell tour in 2011. Today there are small shows of similarity still travelling around the globe that helps to keep Irish dancing alive.

The History, Lyrics and Meaning of the Amazing Grace Song