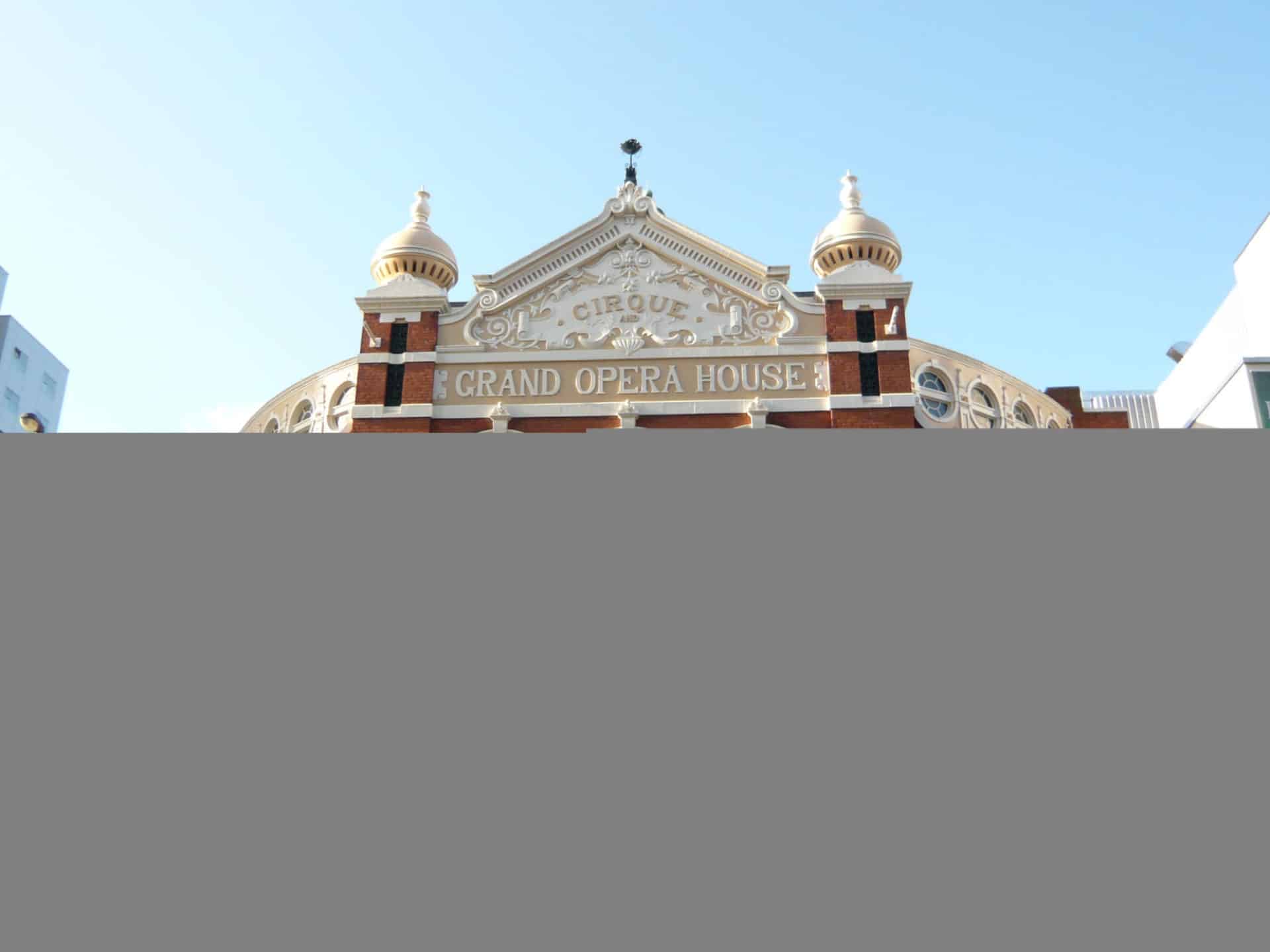 The Grand Opera House is located in Belfast, Northern Ireland, and it was designed by the theatre architect Frank Matcham and opened in December 1895. The opera contains a 100-seat theatre space and three bars. It also hosts outstanding programs for drama, opera, dance, comedy, musicals, family shows, events and even weddings. Its exterior is as impressive as its extravagant and ornate auditorium with its opulent ceiling and intricate viewing boxes, and if you look closely you’ll notice that there’s a distinct Indian theme which is reminiscent of the days of the British Empire.

The Grand Opera House has been a part of Belfast’s extravagant theatre scene for more than 100 years and provides great entertainment, unforgettable experiences and amazing programs that attract the local community and invokes the love of theatre in younger and older people alike.

The new season of the Opera shows will provide the audience with comedy and the great musical performances of the Opera’s latest production: Johann Strauss’ Die Fledermaus, make them reminisce about the disco days of the 1970s with the return of Saturday Night Fever or immerse themselves in the showbiz world with Cabaret.

The National Theatre returns to the Grand Opera House with the new dazzling production of Shelagh Delaney’s gritty drama A Taste of Honey, and the musical delights of On Your Feet, the story of Emilio and Gloria Estefan and the comedy crime show Curtains starring Jason Manford.

Frank Matcham was an English theatre architect and designer. He was born on 21 November 1854 in Newton Abbot, Devon. In his early life, he showed interest in architecture where he became an apprentice at the age of 14 and moved to London when he was 21. There, he joined the architectural practice of T.J Robinson, whose daughter Maria he married in 1877.  For 40 years, he designed and constructed over 90 theatres and worked on the redesign and refurbishment of another 80 throughout the United Kingdom during the period from 1872 to 1912. He was the best at that time in his field and created such amazing buildings, such as the Coliseum and Hippodrome in London, the Opera Houses of Blackpool and Belfast, and the Bristol Hippodrome. Due to his work that was spread around the United Kingdom, it is reported that Alan Bennett the dramatist once said that there was a Matcham theatre in every corner of the United Kingdom. He retired to Southend-on-Sea shortly before the First World War and died a few years later of a heart attack.

The theatre opened its doors in 1895 and since then has played host to some of the biggest names from the world of entertainment. At first, its name was the Palace of Varieties in 1904, but it regained its original name in 1909. The very first show was a pantomime called Blue Beard and Frank Matcham was introduced on stage to the Belfast audience at a special gala opening performance, and since the opera was opened, it witnessed many successful programs in the 1920s and 1930s. Moreover, the theatre witnessed many performances from A-list stars, such as Gracie Fields, Will Fyffe and Harry Lauder.

During World War II, the theatre was used as a location to store ammunitions, and later on to celebrate the end of the war, as Eisenhower, Montgomery and Alanbrooke attended gala performances at the theatre. The Rank Organization took over The Grand Opera House and used it as a cinema between 1961 and 1972.

As the Troubles began in Belfast, business slowed down in the theatre and the Rank Organization started a plan to sell the theatre to a property developer, who proposed that the building be pulled down and replaced with an office block. After that, the building was bought by the Arts Council of Northern Ireland and listed in 1974.

In 1980, The Grand Opera House was reopened after the Permanent Secretary of the Department of Education, Arthur Brooke, lent his support to the project and his department provided the funding for an extensive renovation of the theatre.

During the Troubles, the Grand Opera House was damaged by bombs on several occasions, when the Europa hotel which is located near the opera house was targeted and badly damaged by bomb explosions between the years 1991 and 1993. Despite the damages that happened to the theatre, it continued hosting musicals, plays, pantomimes and live music.

If you are a regular show-goer, you may be familiar with the Hippodrome Restaurant at the Grand Opera House. The restaurant can accommodate 70 people and is available for pre-theatre dinner booking for ticket holders. The restaurant is designed like an L shape in the city centre which overlooks Great Victoria Street and its balcony overlooks the entrance to the Baby Grand and Luciano’s Cafe Bar.

Conference Venues and Meeting Rooms in the Grand Opera House:

If you are looking for conference rooms and meeting rooms, then the Grand Opera House in Belfast is the best place for that, from the auditorium to the Baby Grand to the Shakespeare Rooms and Boardroom, the Grand Opera House caters customers who require for meeting rooms and conference venues. There you can hold graduations and awards ceremonies in Belfast, to fashion shows, private parties, murder mystery nights, burlesque nights.

A Place for Weddings:

The Grand Opera House is the place to hold a unique and unusual wedding and it might be different from any other wedding venue you have been to. The Grand Opera House in Belfast is one of the best wedding venues in the city to hold your dream wedding ceremony, reception and wedding photos. The hospitality team also offers a range of catering packages to suit each customer’s preferences.

The Renovation that Took Place in 2006:

A renovation was undertaken in 2006 with the addition of the Baby Grand performance space together with extended foyers, extended stage wings and artist accommodation and access for customers with disabilities. On the third floor, a restaurant called “The Hippodrome” was constructed, while on the ground floor, a daytime bistro named Luciano’s opened as well as space for corporate meetings and functions. Luciano’s closed after several years of poor trading, and through the renovation, the place hosted smaller musical, dramatic and comedy performances as well as educational events until it was reopened with a great celebration on 21 October 2006, with a capacity of 1,063.

Irish Staycation: 6 Of The Best Places at Home