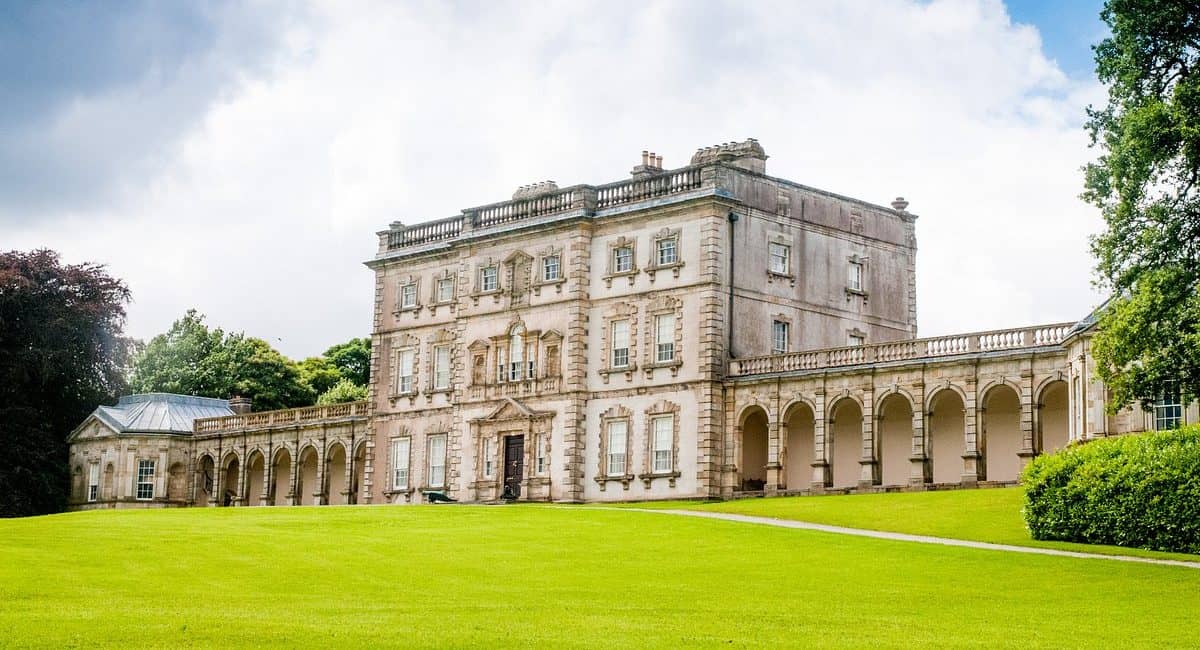 Another location to make the list of remarkable Irish buildings is the 18th Century estate known as Florence Court. This house looks more like a castle, it is located in Enniskillen, County Fermanagh, Northern Ireland. This spectacular Irish estate is the sister property of Castle Coole, both which are looked after by the National Trust.

Florence Court is surrounded by stunning woodland trails and set against the backdrop of the Cuilcagh mountains. It is considered one of the most important Georgian House found in Ireland. Although there is a lot of mystery surrounding the house. There are no building records and little is known about the architectural development.

Although there is a lot of mystery surrounding Florence Court, we will share what we do know. Florence Court is believed to be the creation of three successive generations of the Cole Family. The cole family were powerful landowners in County Fermanagh with roots in the plantations of the 17th century. The foundations of the house were laid by Sir John Cole, who actually named the estate after his wife, Florence Bourchier Wray.

The estate offers fascinating stories of the many generations of Earls of Enniskillen and their families who spent time there. It is also home to a magnificent collection of Irish furniture. Some of this furniture is considered the best Rococo plasterwork in Ireland.

Florence Court was the seat of the Earls of Enniskillen until 1973. The 5th Earl handed the house and its fourteen acres over to the National Trust in 1953. In 1855 a terrible fire destroyed much of the upper part of the house.

The National Trust used their best efforts to restore Florence Court to its original glory. Improvements were also made to the estate including a park and drive area designed by Willaim King and the creation of the Grand Gates.

Guided tours are available of Florence Court where visitors get to see the house up close and personal and learn more about the stories and history that surround its 250 years old of life. The building from the outside looks so breathtaking, that all you want to do is spend the day there!

There are many interesting features at the estate, especially the different gardens for a visit to explore.

First, there is the pleasure garden that was landscaped during the 19th century that offers beautiful panoramic views on the nearby mountains. The notable features in this garden are the Victorian specimen trees and interesting display of tropical plants.

Then there is the Summer House also referred to as the Heather House. It is a reconstruction of an 18th century thatched summer house that overlooks the pleasure garden.

Another important feature is the walled-garden that was first laid out in the 18th century. It was later added to in the 1970s by Charlotte, Countess of Enniskillen. It includes two pounds, a rose garden, a variety of fruit trees and a vegetable garden.

Once you have explored Florence Court and its surrounding landscape don’t forget to check out their gift shop located in the Stable Yard. There is a wide selection of gifts and souvenirs to check out including local craft items, ladies clothing, speciality food items and more. Also not to forget the second-hand bookshop that’s worth exploring. Maybe you’ll find a hidden gem amongst the books to enjoy.

Florence Court is a great place to spend the day, tour the house and exploring the walking trails that offer visitors views across Fermanagh and beyond.

Must See Belfast: An Insider's Guide to the Best of Belfast