Close X
Home/Things to do and see in Asia/Ferrari World, Abu Dhabi: The Largest Indoor Amusement Park in the World 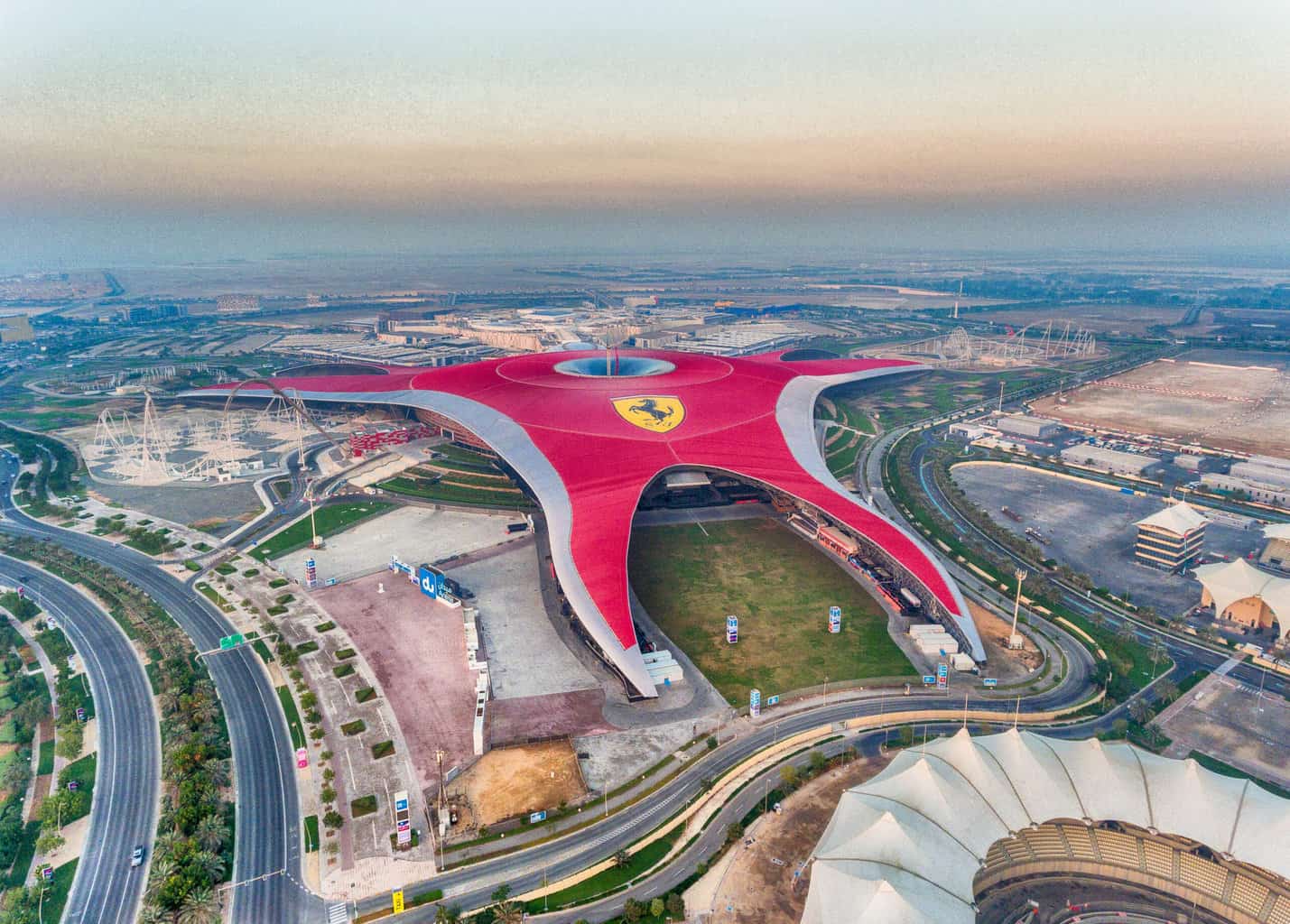 The cities in the United Arab Emirates, such as Dubai and Abu Dhabi, are distinguished by the presence of everything new, distinctive, and unique in them. Also, by surprising the world every time, they invent something new from buildings, centres, and even ways of celebrating themselves and others on various occasions. One of these innovations is the city of Ferrari World.

Ferrari World is a theme park in Abu Dhabi, specifically on Yas Island. The area of this city is approximately 200,000 m2, which places it first in terms of being the largest covered amusement park in the world. In 2010, this wonderful city was officially opened for entertainment to the public.

This unique architecture was created by Jack Ross & Partners, based in Cincinnati, USA, and has designed most of the games in it.

Yas Island is one of the entertainment and tourist destinations filled with artistic and recreational attractions. It is about half an hour by car from the middle of Abu Dhabi and near the Louvre Abu Dhabi and the Sheikh Zayed Grand Mosque. The island is also home to many attractions, including Warner Bros. World, a branch of Disneyland, Yas Marina Circuit, Yas Water World, and Ferrari World, which we are talking about today.

The History of Ferrari World

In the year 2005, Ferrari and Al-Dar Properties entered into an agreement that provided for the establishment of the first Ferrari theme park in the city of Abu Dhabi, and it was supposed to be opened in 2008. Still, this delay came as a result of the delay in starting construction in November of 2008.

The delay of the opening, which was supposed to take place on 28 October 2010, was because of the death of the Ruler of Ras Al Khaimah, Saqr bin Muhammad Al Qasimi, on the day before the opening day. Then it officially opened its doors to visitors on 4 November 2010.

To learn more about the Ferrari World, we would get to know first about the Ferrari founder Enzo Ferrari, an Italian designer and driver, who was born on 18 February 1898 in the Italian city of Modena, and then passed away on 14 August 1988.

He was the company’s founder, and the car has been used in global racing competitions from the second half of the twentieth century until now. After World War II, Enzo tested the vehicle of a small car company in Milan, and in 1920, he became a racing car driver for Alfa Romeo.

In 1932, Enzo Ferrari stopped driving racing cars. After several years, specifically in 1937, Ferrari built the first racing car entirely designed by him for Alfa Romeo, but in 1939 Ferrari separated from Alfa Romeo officially and founded Ferrari.

After World War II and throughout the years, Ferrari cars were known for their tremendous speed and impressive quality. Ferrari cars, especially Formula 1 cars, won many major prizes. In 1969, Enzo Ferrari sold a 50% stake in his company to Fiat but remained president until 1977, retaining control of the Ferrari racing team until his death.

There are many types of tickets you can choose from, such as:

Ferrari World provides the largest Ferrari store in the world. It has a sweet shop specialising in the candy industry and contains games for children that enable them to play in Ferrari cars with 599 engines. There is also a part to display the latest sports fashion. Still, if you feel tired after a long day of fun and excitement, you can head to the Italian restaurant, which serves the most delicious authentic Italian meals.

This area is dedicated to people fond of Formula 1 racing, as it includes games related to Formula racing either in form or content. In the coming part, we will learn more about the Formula District in the Ferrari World.

The Grand Prix for Juniors is a Formula car race for children. The child participating in this experience lives the adventure of driving real Formula cars and watches educational videos from experts conducting this type of car.

Formula Rossa is the fastest roller coaster in Ferrari World, where its speed reaches 240 km/h in just 4.9 seconds. The speed helps the vehicles rise to a range of 52 metres and then suddenly drop breathtakingly, taking participants to a world full of excitement.

Ferrari has designated this place as an exhibition for its high-speed supercars. It includes several types of Ferrari high-speed cars such as 288 GTO, F40, F50, Enzo, LaFerrari, F12TD F, and many others.

All the entertainment activities in this area are linked to the charm of the Italian town of Maranello. Many games and places have been designed to simulate the reality of the city with scenic charm. That’s why all the Ferrari World games are dedicated to this area. There you will find:

This game allows you to explore the miniature version of Italy in a 1958 Ferrari California 250 by entering a miniature city that simulates the reality and beauty of Italy.

This game includes vehicles designed in the form of Ferrari F430 Spider cars. These vehicles are linked to an external track that provides for very sharp turns followed by straight roads to give the player unparalleled fun, especially since the speed of the vehicles reaches 95 km/h.

A tour in which visitors are introduced to Ferrari car manufacturing. This includes all the design stages, from the manufacture of engine parts and vehicle paint to the readiness of these cars.

It is a miniature version of the scenic Italian floating city, where the visitor rides in boats or cars and enters waterways filled with gorgeous landscapes.

A tour in a 4D virtual world, in which the player dives into the ocean depths, flies over cliffs, and penetrates ice caves, in addition to amazing technological effects that give the player a natural feeling as if they are in this place.

This game is a roller coaster that includes buggies inspired by the shape of biplanes, and the player will be able to reach a height of 36 metres with a slope angle of 51 degrees.

The place is dedicated to people with strong hearts and a passion for insane speed. This zone features fast-paced games that reach the heights of the highest point on Yas Island through the city’s iconic red roof. The places located in the Adventure Zone are:

It includes advanced simulators that put the driver in an enthusiastic atmosphere as if they were really racing. Still, you have to remember that this game depends on prior reservation.

This is one of the most adrenaline-fueled games for participants; this game includes a series of exciting adventures in which players reach the highest point on Yas Island at a height of 64 metres at a speed of 102 km/h, followed by a fall and descent at full speed.

Ferrari World organises many live shows to provide the most significant amount of fun for children and adults alike. The Ferrari World shows include Maranello Cinema, which will take you back to the twenties to tell the story of Ferrari’s founder, who turned his dream into reality. The live shows also feature cartoon characters, such as the mechanic Berto and the mouse Benno.

This area is dedicated to children’s games, as it includes miniature copies of the most famous, traditional adult games, and these games are:

It is a miniature version of the Formula Rossa game for adults, where the child spends an unparalleled fun time with vehicles that reach 45 km/h.

A newly added game to the Ferrari World that includes small cars in the form of formula cars that run together on a long railway to give the child the best fun in the world of speed and power.

A tower with a height of 13.5 metres allows the visitor to enjoy an amazing aerial view of Ferrari World and experience the fall with a fun bounce.

This game offers the experience of racing with family members in a world filled with interactive challenges, special effects, and unique cartoon characters.

A recreational activity suitable for both adults and children, as this activity depends on the technology of the virtual world to transport visitors to the atmosphere of charming Italian nature.

A miniature version of the fantastic flying game for adults, this game allows children to fly in the skies of Ferrari World.

Giant tires that accommodate five people and give the visitor a fun spinning experience with family and friends in a lively atmosphere.

You can eat the most delicious food and drinks from the best Ferrari World restaurants in Abu Dhabi, and among the most famous restaurants, there are:

This café offers many kinds of delicious Italian baked goods and desserts, as well as speciality gelato and ice cream.

Mamma Rossella was awarded the best Italian Restaurant of the Year 2015. This Ferrari World restaurant is famous for its menu, which includes pasta and authentic Italian wood-fired pizzas.

The real staff cantine in the Ferrari factory inspired this cafeteria’s design, serving the most delicious Indian, Arabic, and Western dishes with a private barbecue corner.

Officers Food Quarters serves fast food of all kinds, such as burgers, pizza, and shawarma, as well as all sorts of sandwiches and salads.

Get Lost in Nature: Most Beautiful London Gardens and Parks