The Superstitious Fairy Trees in Ireland 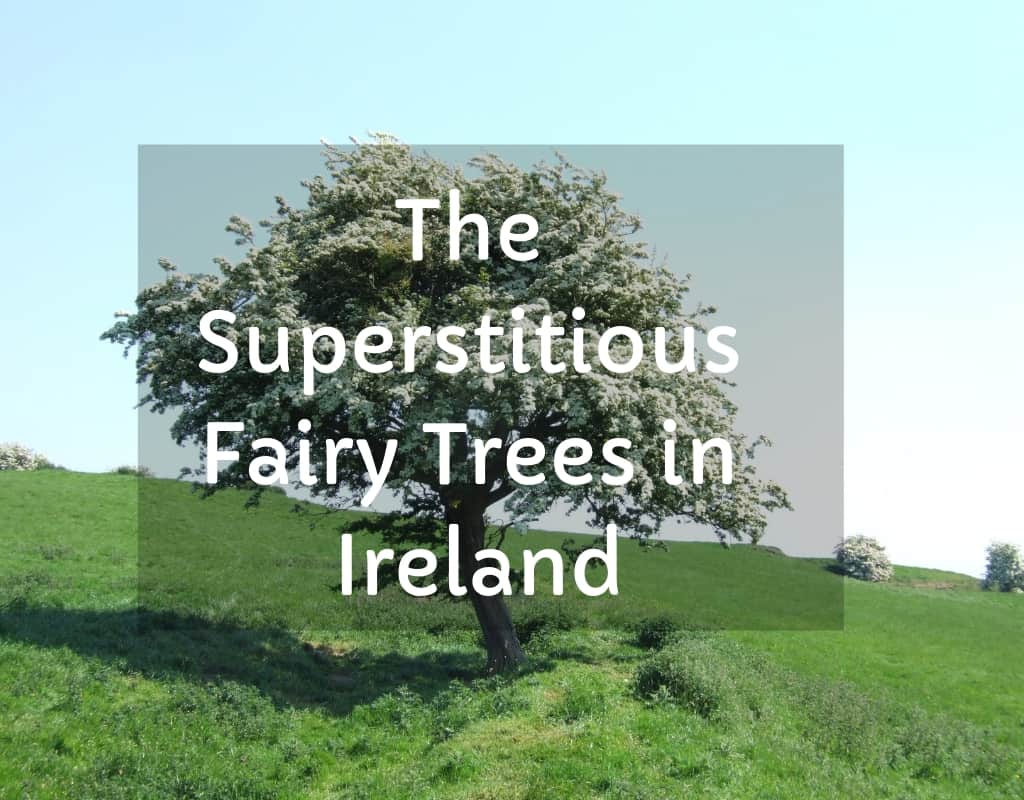 Ireland has always been a place filled with fascinating folklore and stories. One very interesting folklore surrounds those of the mystical Irish Fairy trees. All around Ireland, there are many Fairy trees that are believed to be the home of the fairies or the “wee folk” as people like to call them as its thought that they don’t like being referred as fairies.

Even today in Ireland the Irish Fairy trees still carry a lot of superstitious. Many Irish people wish to not disturb the Fairy trees as it is said to bring bad luck to those that do.

What are Fairy Trees?

Fairy trees in Ireland are known as either Hawthorn trees or Ash trees. What make’s these Irish Fairy trees different from other trees is their location. Usually, the Fairy tree is alone in the middle of the field or on the side of a road. The trees can be easy to find as long as you know what you’re looking for. You will also often find Fairy trees at ancient sites or at holy wells around Ireland.

The hawthorn tree is best described as a small, bushy tree that can grow up to six metres high. The tree can also live to an impressive age of four hundred years old.

The hawthorn tree is thought to be a sacred meeting place for the fairies and cutting down a lone hawthorn tree is avoided at all costs. The Fairy trees are believed to bring luck to its owners and bring prosperity to the land where they lay. Many people who visit the fairy trees leave prayers, gifts and personal items as a token of good gesture in hopes of receiving good fortune or healing in return from the ‘wee folk’.

You might be wondering how the hawthorn tree actually became to be known as a fairy tree?  Well, with the tree blooming in Spring it was associated with the festival of Beltane. This was an important time for the ancient Irish and as well as the Sidhe. (The fairy people).

Beltane is referenced throughout some of the earliest Irish literature and has been associated with important events in Irish mythology.

It is believed that the ‘fairy folk’ had enchanting powers where they could outwit humankind whenever they wished. They symbolised both a combination of good and evil. The fairy folk could easily bless someone or cast bad luck over them. They harboured both fortune and misfortune and this gained the ‘wee folk’ a lot of respect.

Many people were said to be frightened of upsetting them due to the magical powers they had. People also believe that if you cut down or damage one of the Irish Fairy trees you would face a lifetime of bad misfortune.

Irish people take the superstitions of Fairy trees very seriously. In fact, there was even a delay in building a motorway for over 10 years because people didn’t want to harm one of the fairy trees. You can read more surrounding the story of this Irish Fairy tree here.

Some Fairy trees are also located on the land of farmers, who would go to great lengths to make sure the trees were protected. They would pile boulders around the base of the tree so that there would be no accidental damage caused. It is also thought that the fairies are the greatest protector of Irish archaeology, another reason why farmers refuse to remove them.

There are also hundreds of ‘fairy forts” still found in Ireland today, many have not been disturbed due to the superstitions that are associated with them. Such as you don’t want to touch the home of the fairies or they might take revenge on you.

The “Fairy Forts” in Ireland are also known as Ring forts, a circular enclosed surrounding by an earthen or stone bank. They were originally designed to protect cattle during the night from cattle raiders. Over time people moved into more open spaces and its believed that the fairies made these ring forts their new homes. And so, they were given the name as “Fairy Forts”.

Irish folklore tells us that the Fairy trees are a getaway for the two different worlds to collide, the mortal world and other-world of fairies.

During ancient times in Ireland, there was a thing known as fairy faith, yes, the belief in all thing’s fairies. It all started when the Milesians took part in a mythical race in the 11th century that saw them come to Ireland. The Milesians were Gaels who sailed from Hispania to Ireland after hundreds of years travelling around the earth.

When the Milesians arrived in Ireland, they banished the natives to the underground or other-world as it was also known as. The natives become known as the Sidhe, the fairy folk who lived underground; living among the trees and bushes.

It is believed that the Fairy folk had many ways of getting to the otherworld’s through the base of Fairy trees, through burial mounds and even underwater. These getaways became very important to the fairy folk to easily move between the two worlds, and so became protected by magic powers.

Where to Find Fairy Trees in Ireland?

The great thing about travelling around Ireland is that everywhere you turn you’ll uncover a tale of wonder. Fairy trees offer that and more, they are fascinating and fun and there’s plenty of them be found in Ireland.

Fairy trees are dotted all over the Irish Countryside and are easy to spot as they will be alone. Once you see one, you’ll be spotting them everywhere you go in Ireland.

Many of the fairy trees are found in places of ancient pagan or holy sites as well as the countryside. If you wish to go find some Fairy trees in Ireland, we have some popular suggestions for you to check out:

These are just a few places in Ireland you can visit where you’ll find some magical Irish Fairy trees. Just remember not to disturb the trees and maybe you’ll be granted with some good fortune. Fairy trees in Ireland are special and full of wonder. Some trees were also considered by the Celts to be the trees of life itself. Visiting them while you are here will hopefully be a rewarding experience and something that’s unique to Ireland.

Have you seen any Fairy tree’s in Ireland? We would love to hear about your stories and experiences below!

Belfast Street Art: A Tour Around the Cathedral Quarter (and Beyond)

Fun Things to do in Northern Ireland