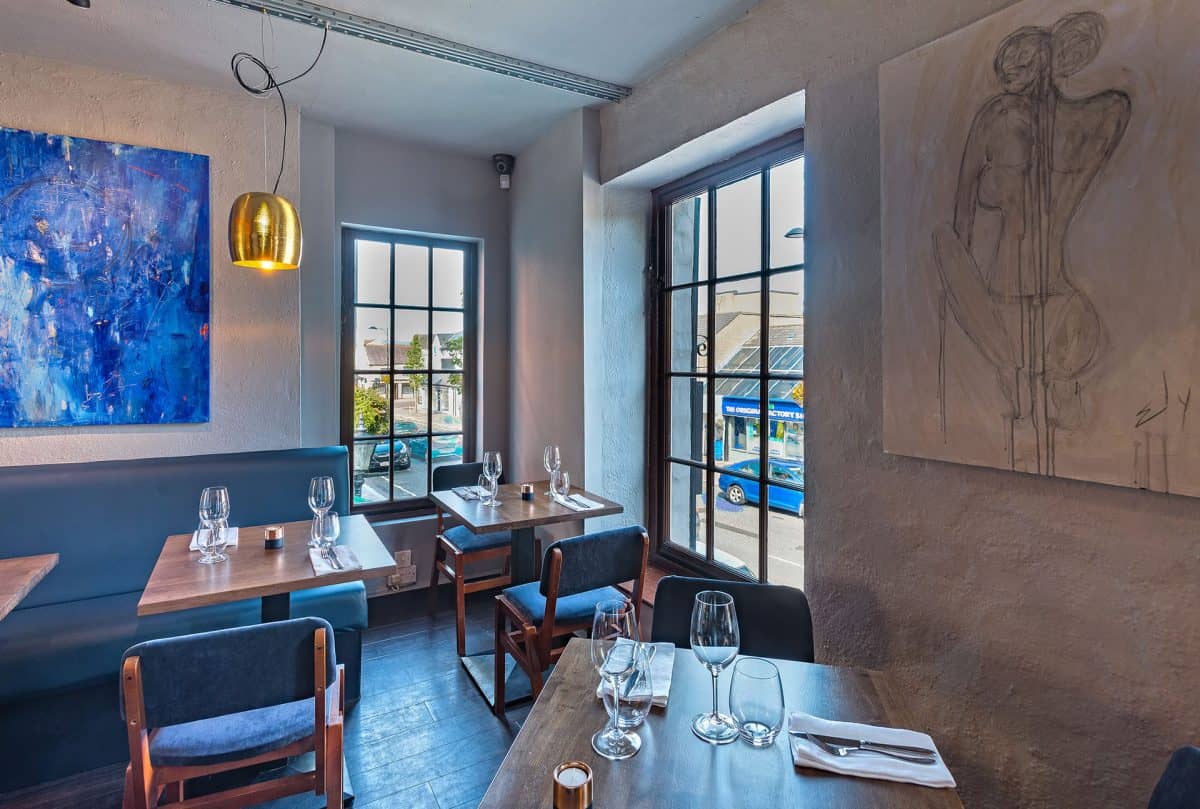 Holywood is a town located in County Down, Northern Ireland. It lies on the shore of Belfast Lough, between Belfast and Bangor. The English name Holywood comes from Latin Sanctus Boscus, meaning ‘holy wood’. This was the name the Normans gave to the woodland surrounding the monastery of St Laiseran, son of Nasca.

In the early 19th century, Holywood became popular as a resort city where many wealthy Belfast merchants chose to dwell. Today, it is a popular residential area with high-end shops, boutiques, arts and crafts.

Holywood is famous for its maypole in the centre of town, which according to local folklore, dates back to 1700 when a Dutch ship was shipwrecked nearby, and the crew erected the broken mast to show their appreciation of the assistance offered to them by the townsfolk. The maypole is still used for dancing at the annual May Day fair.

Another famous attraction in town is the Maypole Bar, known as Ned’s.

The town also hosts an annual jazz and blues festival.

Considered to be the largest museum in Northern Ireland, Ulster Museum is located within the Belfast Botanic Gardens in Cultra, Holywood and takes up around 8,000 square metres of display space. It features a wide variety of artefacts, including fine art and applied art, archaeology, ethnography, treasures from the Spanish Armada, local history, numismatics, industrial archaeology, botany, zoology and geology.

In 1962, it was renamed as the Ulster Museum and was formally recognised as a national museum. An extension was constructed by McLaughlin & Harvey Ltd in 1972 based on the designs by Francis Pym.

In 1998, the Ulster Museum merged with the Ulster Folk and Transport Museum and the Ulster-American Folk Park to form the National Museums and Galleries of Northern Ireland.

In July 2005, refurbishment of the museum was announced and estimated at £17m, funded by the Heritage Lottery Fund and the Department of Culture, Arts and Leisure. The museum reopened in October 2009, on the 80th anniversary of its inauguration.

Following the outbreak of World War One, the construction of the museum was postponed until it finally commenced in 1924. However, when the museum finally opened its doors on 22 October 1929, its Neo-Classical style was already outdated.

In 1962 the Belfast Municipal Museum and Art Gallery became the Ulster Museum and the following year a competition was launched to extend the museum, with Sir Leslie Martin as assessor. The winning design was created through collaboration between Francis Pym and a 22-year-old architectural assistant from Portaferry, County Down, Paddy Lawson.

The new design merged the existing building and the proposed extension together, achieving the complete fusion of old and new.

In later years, several alterations to the museum took place. Then in 2006, the museum underwent major redevelopment, led by Belfast-based Hamilton Architects. The museum reopened on 22 October 2009 boasting additional exhibition space and a transformed interior.

The Ulster Museum offers a free one-hour welcome tour of the entire museum to its visitors with a maximum of 10 people per group, on a first come first served basis.

Take a journey through the centuries from the Plantation of English and Scottish in Gaelic Ulster to the famine, the industrial revolution in Belfast and is social consequences.

The herbarium in the Ulster Museum (BEL) contains a total of more than 100,000 specimens obtained from Belfast Natural History and Philosophical Society; the Belfast Naturalists’ Field Club; the Belfast Museum and Art Gallery, and the herbarium (BFT) of the Botany Department of The Queen’s University, Belfast, acquired in 1968.

Takabuti, a mistress of a high-standing Egyptian house, lived in Ancient Egypt about 3,000 years ago. Not only is her mummified body on display but also a headpiece which has been made to envisage what she would have looked like when alive in ancient Egypt. The mummy has been on display in Belfast for over 100 years. She can be located in the History Zone.

The Chambers brothers built their first car in Belfast in 1904 and they liked it so much they started a family business making cars and small lorries. The display is placed within the Window on Our World Section of the museum.

This gold and ruby salamander pendant is one of the many objects that archaeologists were able to recover from the shipwreck of the Girona, from the Spanish Armada, that sank off the Giant’s Causeway in 1588. You can find this amazing discovery in the History Zone.

Created by London jewellers, Child and Child, in 1900, this gold pendant was and shows a cat playing around some branches and flowers. It is now located in the Art Zone of the museum.

During the Early Bronze age, about 4,000 years ago, gold was considered a symbol of wealth and power. This lunula neck ornament would have been made by beating out a single piece of gold into a paper-thin crescent moon shape. You can find it in the History Zone.

The Fairy Fountain was carved in marble by Rosamund Praeger of Holywood, County Down, a writer and illustrator of children’s books who is best known for her sculpture. This beautiful discover is now situated in the Art Zone.

There are over 80 different types of Morpho butterfly but Morpho Rhentenor is considered to be the most beautiful. Like all butterflies, they drink their food, taste with their legs and smell with their antennae. This butterfly is a beautiful irridescent blue. It is located in the Nature Zone.

The Edmontosaurus Dinosaurs moved across the plains in what is now North America around 70 million years ago. They walked slowly on four legs when grazing, but could move faster on two when chased by Tyrannosaurus rex. You can find him in the Window on Our World section.

Peter the polar bear lived at Belfast Zoo. He came to the Ulster Museum in 1972 after he died. Polar bears come from the Arctic. They are the largest land carnivores, feeding mostly on seals. You can find him in the Window on Our World section.

This 400 year old painting tells the story of how Christ was helped across a river as a child by a strong man. The name Christopher means Christ-carrier. It can be found in the Art Zone.

This display depicts the turmoil that followed Napoleon Bonaparte’s invasion of Spain in 1808. This is the first time that these images are on display in Northern Ireland. The works are by Francisco Goya (1746 – 1828) who was a painter to the King of Spain and was best known for his incisive and unflattering portraits of the Royal Family and the court. His lived through the Napoleonic invasion of Spain, which greatly influenced his later work.

Six years after the hit HBO TV show Game of Thrones began filming in Belfast, Northern Ireland, it has now become part and parcel of Irish culture. Therefore, the Museum saw it fitting to modify a painting to include some of the themes from the show in one of its displayed paintings, titled “Landscape with Sheep Giant and Dragon)” by William Mark Fisher.

In 2017, an installation, entitled ‘Weeping Window’ will be placed at the Museum. It is a collaboration between artist Paul Cummins and designer Tom Piper and commemorates lives lost in WWI. This work of art was initially displayed at the Tower of London in 2014.

The sculpture will find its new home at Ulster Museum in September 2018 as part of a trip across the UK, as it ventures outside of London for the very first time since 1905.

Funded by the Garfield Weston Foundation, this tour aims to spark the imagination of the next generation of scientists and connect them with nature.

The full 292-bone skeleton is 21.3 metres long, 4.3 metres wide and 4.25 metres high. The Diplodocus was a species of dinosaurs that lived between 156 and 145 million years ago. Railroad workers first discovered the fossilized bones of a Diplodocus in Wyoming, USA in 1898.

The Museum’s discovery centres offer visitors the opportunity to explore and come into contact with natural elements to create souvenirs that they can even take home with them.

Patrons can create artworks to take home or play games or puzzles and make discoveries about art and artists.

Visitors can use real bones, fossils, shells and gemstones and see a real dinosaur egg. They can also examine exotic butterflies and beetles under the microscope.

Visitors can uncover history, archaeology and world cultures by becoming archaeologists themselves through different activities, such as rebuilding pots and skulls, exploring how our homes have changed, dressing like a Victorian and writing like an Ancient Egyptian.

1916 was the pivotal year in Irish history. The exhibition will highlight the Battle of the Somme and the Easter Rising and will include two other sections titled ‘War and Society’ and ‘Legacy’. Visitors will also be able to enjoy audio-visual displays and interactive touch-table tracing the timeline of the war, as well as 3D scans, short films and interviews.

The focus of the exhibition is on the creative spark of individuals who helped shape history, such as the people involved in a war or rebellion who were able to tell their own versions of the 1916 events in personal diaries, drawings or audio recordings. The exhibition contains five sections comprising artefacts gathered from the Imperial War Museum, National Museums Northern Ireland, National Library of Ireland, and PRONI.

The exhibition features historic photographs dating back to the 1850s, including thousands of images relating to the history, topography and personalities of Ireland.

This exhibition highlights the period between 1740 and 1840, which is generally considered a ‘golden age’ in British and Irish art. Portraits by Reynolds and Gainsborough will be on display, alongside landscape painting, sculpture and furniture, to illustrate the order and formal elegance of the period.

This exhibition traced the development of twentieth-century British art, with a particular focus on the post-war period. The title Bare Life refers to the experimental way in which a number of artists during this period depicted the human figure. Such as Walter Sickert, Francis Bacon, Gilbert, George and Matt Collishaw.

Selected from a record-breaking 2,748 entries by artists from 92 countries around the world. The BP Portrait Award 2015 represents the best contemporary portrait paintings.

This exhibition explores the ways in which seventeenth-century artists used light and shadow to create a sense of immediacy and realism in their paintings. With special focus paid to Dutch, Italian and Flemish historic paintings.

As part of a new project, the Ulster Museum has invited the public to share their experiences during the turbulent events of the ‘Troubles’. The project aims to expand the museum’s contemporary collection relating to this particular period of Northern Ireland’s history. Through a series of community collecting events, collection workshops and outreach activities. The gallery is due to open in the Spring of 2017.

The Museum is dedicated to recapturing a 100 years worth of history, by displaying cottages, farms, schools and shops. You’ll also meet guides in costumes demonstrating traditional crafts. Visitors can also climb on and off majestic steam locomotives or horse-drawn carriages, electric trams, motorbikes, fire-engines and vintage cars.

Established in 1958, the Folk Museum aims to preserve a rural way of life in danger of disappearing forever due to increasing urbanization and industrialization in Northern Ireland. The site of the museum was acquired in from the Estate of Sir Robert Kennedy.  The museum officially opened to the public for the first time in 1964. In 1967, the Folk Museum merged with the Belfast Transport Museum, to form the Ulster Folk and Transport Museum.

One of the biggest exhibits of its kind in Ireland, visitors flocked to the Ulster Folk & Transport Museum on 12th of November to view 30 railway layouts and associated exhibits.

Have you ever been to any of these in attractions in Holywood? Are you planning a trip to Holywood? We would love to hear all about it 🙂

Also, don’t forget to check out some of our other blogs that might interest you; Ulster Folk Museum, Down County Museum, Carrickfergus Museum, Botanic Gardens Belfast.

Unusual and Uncommon Things To Do in London