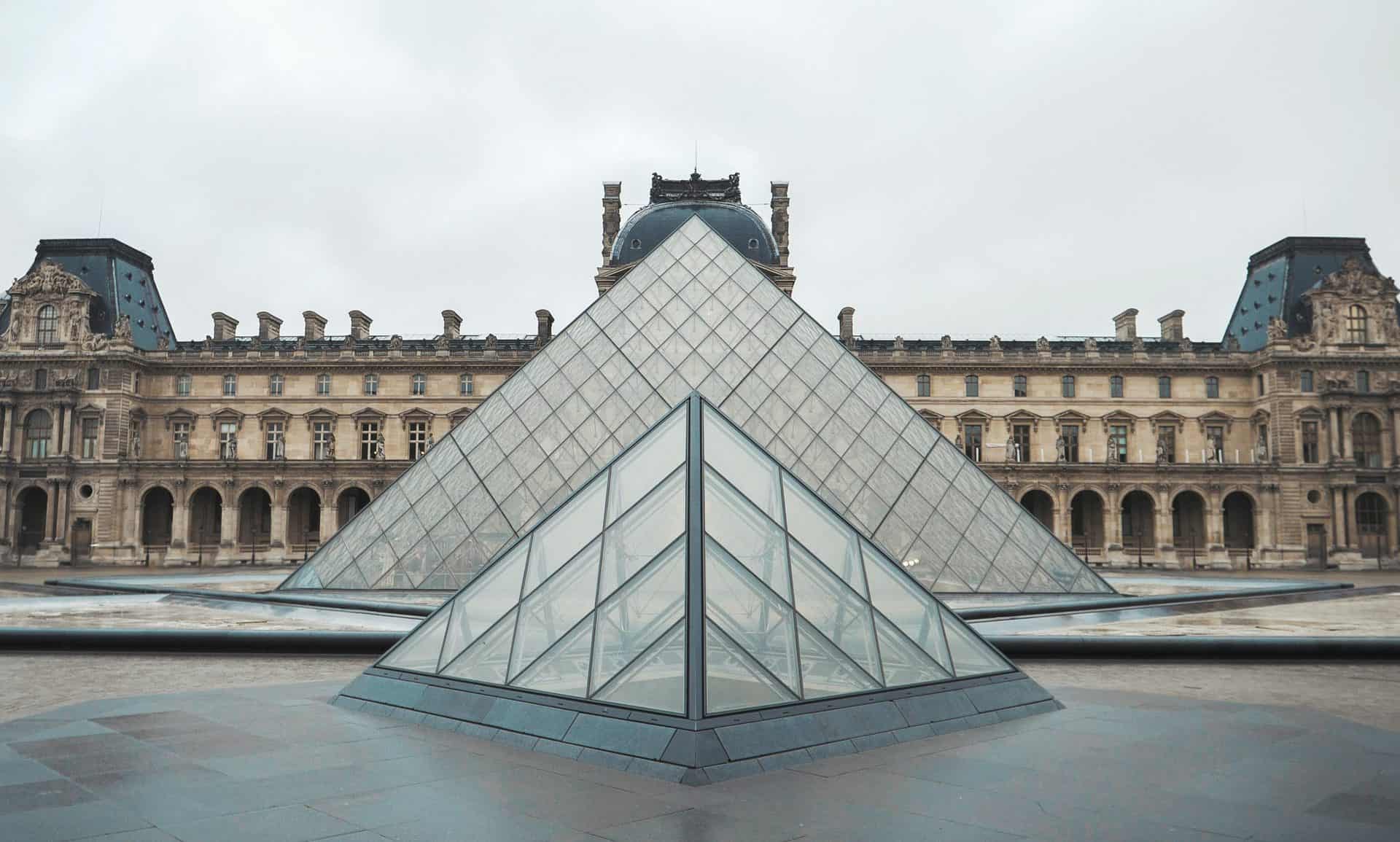 All throughout the Louvre, there are paintings, sculptures, and other beautiful artworks to admire. In fact, if you wanted to see every room in the Louvre, it would you take three days!

When you walk inside the jaw dropping entrance to the Louvre, it is easy to get swept away and overwhelmed by the amount of precious artwork that surrounds you. Guests can find art from places and dates far and wide; pieces from ancient Egypt, the Italian Renaissance, and more lie within the museum’s walls. But don’t worry, with our must-see list you’ll be sure to see some of the most amazing art on the planet.

While the average guest may not think twice about it, the Louvre’s grand entrance is a piece of art and history in and of itself. I.M. Pei’s Pyramid was commissioned in 1984 by François Mitterrand and has been an iconic staple of the Louvre ever since.

When the piece was first constructed, I.M. Pei’s Pyramid drew in a lot of criticism and complaints from the people of Paris.  The iron and glass structure was called “an architectural joke, an eyesore, [and] an anachronistic intrusion of Egyptian death symbolism in the middle of Paris” by the New York Times in 1985. Over the years, the Paris Pyramid has become a quintessential symbol of the world’s most famous art museum. So, next time you enter the Louvre, take a moment to look at the entrance before admiring the art inside.

The unofficial national painting of France, Liberty Leading the People is a piece of art that you have probably seen before. But, nothing compares to seeing the real painting displayed in the Louvre.

Created in 1830, Liberty Leading the People depicts a personified lady liberty as she rallies fighters during the July Revolution which overthrew King Charles X. This painting is full of emotional symbolism; in Liberty’s right hand she carries the flag of the French Revolution, which is now recognized as the national flag of France. In her left hand, she bears a musket that symbolizes the fight for freedom they are about to endure. And, the fallen bodies at the bottom of the painting touch on the harsh reality of the fight for representative government in France. This symbolism and historic relevance land Liberty Leading the People on our must-see list.

The Venus de Milo is one of the most famous and recognisable pieces of art in the world. Despite her mysteriously missing arms, the ancient statue is miraculously still intact. Called by her Roman name, the statue depicts Aphrodite, the Greek goddess of love and beauty. This ancient sculpture is estimated to have been created between 130 and 100 BC, and it was discovered in April of 1820.

The Venus de Milo was not always world famous; only when Napoleon’s looted art was returned to its origin countries was there space in the Louvre for Venus. Since her debut in the museum, however, the Venus de Milo has astonished and inspired all who stop to view her beauty. The statue has even inspired other artists, such as Salvador Dali and Paul Cézanne, to use Venus as their muse.

The work of an unknown sculptor, the Winged Victory of Samothrace is an astonishingly beautiful piece of art from ancient Greece. This work was created in 190 BC and portrays a goddess with held back wings and flowing draped clothing that causes onlookers to question how such beautiful art could be from over 2000 years ago.

If you want to find this sculpture at the Louvre, look no further than the grand staircase in the Denon Wing. With her own section right at the top of the stairs, Winged Victory catches the eye of all the Louvre’s visitors as they turn the corner.

At the Louvre, you can see many royal crowns and jewels from French royalty of the past. The crowns showcased at the museum were each custom made for the king and continue to wow crowds with the precious jewels embedded in them.

The dazzling crowns are located in different wings throughout the museum, but they are all worth stopping and staring at. In the Denon Wing, the Crown of Louis XV features 2 rows of pearls as well as emeralds, rubies, sapphires, topazes, and stunning diamonds. Further into the museum in the Richelieu Wing, Empress Eugénie’s crown can be seen, sparkling with nearly 2,500 diamonds and over 50 emeralds.

Bathsheba at her Bath

Bathsheba at her Bath is a stunning art piece that captures the depths of the human soul. The artist, Rembrandt, is known for his commissioned portraits, but his favorite muse was biblical scenes. In Bathsheba at her Bath, these two genres are combined to create a painting full of drama and emotion as the muse must decide between betraying her husband or disobeying the king.

Interestingly, the model for Bathsheba at her Bath is accepted to be Rembrandt’s partner Hendrickje Stoffels. With this in mind, medical researchers who have come to see the painting observed and noted a deformity in the subject’s left breast, and have given several hypotheses as to what the cause may be.

Finally, no trip to the Louvre would be complete without seeing the Mona Lisa. Easily the most famous artwork at the museum, and perhaps the world, crowds flock to the painting daily to see the Mona Lisa’s iconic smile.

Leonardo da Vinci began work on the Mona Lisa in approximately 1503 and could have continued working on the painting until as late as 1517. This painting was acquired by King Francis I and since then has been property of the French Republic. Being one of the most famous paintings in the world, the Mona Lisa has the highest known insurance value in history at over US$660 million.

The Louvre – A Memorable Trip for Anyone

To make the most out of a trip to the world’s most visited museum, you should have a plan of which pieces you want to see the most. No matter which genre or time period interests you, you’ll be able to find artwork that inspires and captivates you. From classic paintings to ancient sculptures, our list of must-sees will help you make the most out of your trip to the Louvre.