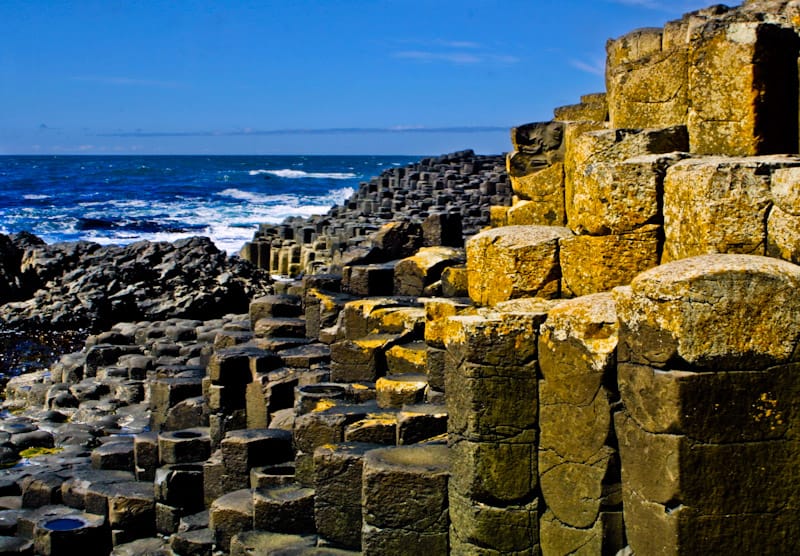 If you are interested in exploring both the history of Ireland and the Irish outdoors, look no further.

Here at ConnollyCove, we have created this guide on historic walkways around Ireland which we think you should explore: North to South.

This walkway is located in County Antrim. It takes you up the North Coast, offering views of cliffs, beaches, harbours and many historic landmarks. The landmarks you will encounter while exploring this region are: The Giants Causeway, Carrick-a-Rede Rope bridge, Dunluce Castle, and Dunservick Castle. The route is roughly 33 miles and starts at Portstewart and ends at Ballycastle.

One of the historic landmarks that you will pass during your travels is the Giants Causeway. Living here is the legend of giant Fin MacCool.

It is said that the columns and rocks were once a path across the North Channel to Scotland. Finn MacCool built this path after accepting to fight the Scottish Giant Benandonner. There are two versions of this legend:

While visiting, you will see the ‘Giant’s Boot’. Said to have been lost by Finn when he ran to hide from Benandonner.

There are similar columns across the sea at the Scottish coast.

Check out the history and legends behind his medieval castle at:

This castle is situated near the village called Dunseverick and the Giant Causeway.

It is recorded at St Patrick, Patron Saint of Ireland, visited this castle in the 5th Century. Here, he baptised a man called Olcán who later became a Bishop of Ireland.

In 1642 the castle was destroyed by General Robert Munro. Today, only the ruins of the gatelodge remain.

This area is full of history and legend. With its rich history and natural beauty, it is no surprise that C.S Lewis took much inspiration from the area.

History and Legend in Ireland

There is deep history and many legends in this area of Ireland. We have listed some of the most interesting:

It is said that Saint Patrick’s banishing of the snakes in Ireland took place in the Mourne Mountains. He spent much time here converting the local people to Christianity. There is a small stream which is named after him. A rock along the stream bank is said to have embedded, an impression of his hand, from when he drank the water from the stream.

This is a big granite boulder which rests on Slieve Martin. It is said that our giant, Finn Mac Cool threw it from the opposite side of Carlingford Lough at an enemy.

Conchobar mac Nessa King of Ulster wanted to have a woman, Deirdre, as his wife as she was the most beautiful. He captured her and hid her in the slopes of Slieve Gullion. However, she met another and fell madly in love with a young warrior called Naoise.

They fled away from Conchobar. However, he found Deirdre and convinced her to marry him after having someone kill Naoise. Deirdre hated him, in an attempt to stop her hatred of him, Conchobar offered her the man who killed Naoise.

It is said Deirdre died of heartbreak. It is said that from the two graves grew two trees, they grew and became so intertwined that nothing could come between them, symbolic of their everlasting love.

Near the dam, in the trees, it is said that an Irish Chieftain is buried and haunts the land.

Beware Jenny Black’s tricks, it is said that she enjoyed tricking travellers. An infamous witch lived here. The hills were covered with an enchanted forest, full of evil spirits, devils and hobgoblins. She was burned at the stake for her wrongdoings, however, it is still said that she haunts the hill in the form of a white hare.

I is said that a hunter called Sheelagh was on a hunt in the Mournes. She found a fox and chased it. She was too fast for the rest of the hunt to keep up with her. It became cloudy and visibility dropped.

An igloo-shaped building. It was built in the 1840s and was used by the Annesley family to store ice. The ice would have been collected and stored here during winter to last the rest of the year. It was restored in 1996 by The National Trust.

The wall started to be built in 1904 and took 18 years. It is 3 meters high and runs for 22 miles across the 17 peaks in the mountains. If you follow the mountain you are guaranteed a difficult journey, full of stunning scenery.

Located in County Meath, surrounded by natural beauty. It is an amazing place for people to explore Ireland’s history while enjoying the outdoors. The area is full of monuments and myths.

This area is one of the largest Celtic monuments in Europe dating back 6,000 years ago. There are hundreds of monuments in this location filled with historic value. We have noted some of the most important:

During historic and prehistoric times over 142 kings ruled over this area. Located at the north of the Mound of Hostages is the King’s Seat or The Stone of Destiny. It was said to have been brought by Gods and roared when the rightful ruler sat upon it.

In a churchyard, you will find the ancient standing stones. There are two of them. The taller is believed to have featured the figure of the Celtic fertility God Cernunnos.

Temple under the hill

The Famine Walk – The Killary Fjord

This area is located in Connemara and creates a natural border between County Mayo and County Galway. Surrounded by mountains and sightings of dolphins, it is no wonder that The Killary Fjord is a popular place for hikers. However, it has a rather upsetting history.

During the Irish Potato Famine, the people who lived in the town of Louisborough were told that if they went to the landlords at Delphi Lodge then they would be given food. The people set up this walkway in horrendous conditions. Some died on the walk there. When some people got to the Lodge, they were refused. On the walk back to the town, most of the people died.

Along the trail, travellers can see the ridges of lazy beds and home ruins.

The Glendalough Valley is in the Wicklow Mountains national park. With many route options, this is a popular destination for hikers. With over 20,000 hectares of land and many roads to explore, travels are spoiled for choice of path and scenery.

In the 6th century, Saint Kevin founded the early Christian monastic settlement which developed into the Monastic City. While exploring, you will see many of the ruins of this ‘city’. Here are some of the ruins you can explore: the Round Tower which is 30 meters high, along with many other remains. You will also discover the Priest’s House, built in the 12th century; a large granite cross built in the 6th or 7th century; and the ‘Cathedral’, the largest site here and built in the 11th and 12th century’s.

Mining in this area dates back to the 1790s and took place over 150 years, until 1957. Visitors can explore these mining villages, where once 2,000 people worked.

This town in Cork offers three trails where visitors can walk through the history this town has. As it has the second largest harbour in the world there is much heritage here: from the Famine emigrants to the Titanic’s visit. Each route will take visitors through the history and will provide stunning scenery of the seafront and colourful streets. The best part of these trails is that they are completely self-guided! With sighs guiding people and plaques at places of interest, this is perfect for people who want to explore the area, and its history, at their own pace.

This route is 2.5 kilometres long and will take visitors on a journey across the length of the town along the prom walk. Some of the historic areas you will explore on this route are: The Former White Star Office, The Five Foot Way Walk and the Cobh Museum.

This route is 1.3 kilometres long, the shortest but steepest route. However, the scenery and history you will explore will make up for the added walking efforts. This route takes visitors towards St. Colman’s Cathedral. Some of the historic areas you can explore are: The Old Church Cemetary, The Titanic Memorial and

This final route is the longest, 2.8 kilometres long. This route starts from the town centre and leads you to The Bench on the opposite side of Cobh. From The Bench, visitors can take delight in the amazing scenery of the harbour and surrounding islands. Some of the historic areas you can explore on this route are: the former Residence of Father Matthew, the Clock Tower Gallery and the Holy Ground.

Visitors can access Valentia Island by a road bridge at Portmagee or by car ferry at Renard Point. This island is filled with beauty and history and there are many routes people can explore that contain elements of Ireland’s rich history.

Like most destinations in Ireland, this tiny island is full of history for people to explore. Here are some stories of this island’s history:

On this island, visitors can behold the wonders of evolution with their own eyes. These Tetrapod Tracks are dated to have been made between 350 and 370 million years ago. Although they may not look like much it shows the transition between water and land-living animals.

This island is said to have been home to the blind druid Mug Ruith. It is said he could grow to enormous heights and his breath blown could cause storms and turn men to stone.

The Knights of Kerry

There were three Anglo-Irish hereditary knighthoods in the whole of Ireland. The Fitzgerald was one of these family’s. They resided on the island of Valentia is 1780.

This lighthouse is located at Cromwell Point on the island. The site where you will find the lighthouse was originally a Fort built in the 16th Century. Today you can still see the bastions and the barrack walls. Later, in 1828, Right Honorary Maurice Fitzgerald, Knight of Kerry ordered for light from this point. The first light shone in 1841 and still shines out to sea today.

If you enjoyed reading about historic locations around Ireland, please enjoy more of ConnollyCove’s articles about the rich history of Ireland: