Lyon is a beautiful city that is home to districts with rich history and ancient structures. Today, we will be exploring Lyon’s majestic first district and discovering the key features that make this area a must-see.

This magical city has many different parts that make it one of the most beautiful cities in France to visit. Go to the Terreaux Square, where people can admire the City Hall and the amazing Bartholdi’s Fontaine in the middle of the square. Discover the spectacular Lyon National Opera, among other hidden gems. We have picked some of our favourite sights to see in Lyon for your next big trip.

Wonders of the 1st Arrondissement

Knowing where to go in new cities can be difficult but we have selected some of the best features and sights to see when visiting Lyon in the 1st arrondissement. An arrondissement translates, essentially, as a district, and it is a common term for spaces within cities in France.

Built in the 17th century, Terreaux Square has been at the political heart of Lyon for the last few centuries due to the construction of the City Hall right in the middle of it. It takes its name from the French “Les Terreaux”, which refers to the muddy ditches that surrounded the city in the Middle Ages.

Today, it remains a centre of culture for Lyon and is host to many concerts and performances. Each year, it is the central point of Lyon’s Festival of Lights.

The Town Hall, facing the square, was opened for purpose in 1672. It was partly destroyed by fire but was restored in the 19th century to be used as a town hall again. On the other side, alongside the square, the Palais Saint-Pierre was built on the site of an old abbey and has housed the Museum of Fine Arts since 1803.

Finally, facing the Museum of Fine Arts, stand the famous Bartholdi’s Fountain. Terreaux Square is a very popular hang out spot with native Lyonnais and is lined with restaurants and terraces, to enjoy a glass of wine or cup of coffee with friends in the summer.

Facing the Opera and overlooking the Terreaux square, the Town Hall is one of the most remarkable structures in the whole of Lyon.

The Town Hall was built between 1646 and 1672 by the architect of the city, Simon Maupin.  Due to the positioning of the new town hall, Terreaux square became the administrative centre of Lyon.

The Town Hall was partly destroyed in 1674 by a devastating fire. Noting the lack of administrative facilities, the king of France at the time, Louis XIV, called upon Jules Hardouin-Mansart to draw up new plans for the new Town Hall. During the French Revolution, the consulate hall was transformed into a revolutionary court.

Tragedy struck again on the 14th of July 1803, when a second fire destroyed the building, after being completely renovated under the Second Empire of France.

Today,  the City Hall is home to the city council that meets ten times a year.

Palais Saint-Pierre: A Museum Built into an Abbey

Various evidence led archaeologists to conclude that the foundation of the monastery didn’t precede the Carolingian period. During the 14th century, life within the church changed and nuns began to live within the community. The Sisters defied the norm by living outside the monastery, and the whole Chapter only met once a year outside religious calendar events.

In 1503, Louis XII and Queen Anne of Brittany, passing through Lyon and heard about this unusual behaviour exhibited by the Nuns. Angry at their findings, they were ordered the Nuns to resume their religious life in the abbey and to comply with the rule of Saint-Benoît.

Supported by their families, nuns call upon the Pope and express their discontentment before Queen Claude of France. The decision was then made to expel them and repopulate the abbey with more devoted sisters. Finally, in 1637, the abbey passed under the authority of the Archbishop of Lyon and the abbesses were to be appointed by the king.

Not just a religious institution, in 1801, the Bourse de Commerce moved there and didn’t leave until 1860 when the Palais de la Bourse was built for them in that same year.

On a prefectural decree, a museum of fine arts in Lyon was installed in the former abbey in 1802, on the first floor of the south wing, in the area that was used to heat the abbey. The District Executive Board decided to make these buildings a place of conservation for paintings, medals, bronzes and other art monuments from those who fought in the French Revolution.

Today, in this museum, people can discover a huge myriad of artwork and antiques from ancient times to the present day. It is divided into five departments and seventy rooms. Visitors can experience over 5,000 years of history and art, covering an area of about 14,500 metres squared.

The Opera of Lyon is one of the most striking features of the city of Lyon that truly displays Lyon’s heritage with modern architectural gestures.

In 1754, the project to create a Grand Theatre was entrusted to Jacques-Germain Soufflot, also the architect of the Pantheon. He created an oval performance hall that can accommodate 2.000 seats, with three balconies.

In 1826, it was tragically ravaged by a fire. Not to be left, Antoine-Marie Chenavard and Jean-Marie Pollet, both architects, undertook to replace the building, and in 1831 a new opera with 1,800 seats was opened to the public.

In 1986, the Opera was completely renovated by the architect Jean Nouvel. He wanted to preserve only the original facade of the building and remove anything that was obstructing that heritage. He created eighteen floors: five in the basement, seven in the body of the building and six in the glass roof.

The lighting of the Opera’s dome is also home to a work of art, painted by the artist Yann Kersalé. The red lighting of the glass roof varies according to the number of visitors into the building, on performance evenings.

Classified as a historical monument, Bartholdi’s Fountain, built in the 19th century, symbolizes France (Mariane) and its four tributaries (horses). It was created by the sculptor Frédéric Auguste Bartholdi and shown to the public in 1892.

This fountain consists of 21 tonnes of lead and iron, 9 meters in length, 4.85 meters in height and 15 meters wide in diameter.

A stone’s throw away from Bellecour Square, Jacobins Square, is one of the most beautiful spaces within Lyon. Considered a world heritage site by UNESCO, it is surrounded by bars, restaurants and shops.

The fountain has been carved from white marble and it stands in the centre of the square. It was designed by the architect Gaspard André in 1885. Built to celebrate famous Lyonnais artists, it features the architect Philibert Delorme, the sculptor Guillaume Coustou, the engraver artist, draughtsman Gérard Audran, and the painter Hippolyte Flandrin.

Today, people can enjoy a coffee on a terrace with a view of this amazing fountain.

Bellecour Square is the most important square in Lyon and the fourth largest square in France with a size of 310 by 200 meters, or about 62,000 metres square. It is also the largest pedestrian square in Europe.

Due to the large, bronze statue of Louis XI in the centre of the square, it is also known as Louis-le-Grand Square, Federation Square, The Equality Square, Royal Square and finally Bonaparte or even Bella Curtis Square. Just a few names to say the least.

During the Revolution, the square was known as the Federation Square. A guillotine was installed there in 1792 but, by 1793, the Royal statue was destroyed and the Square became the Equality Square. At the end of June 1800, Bonaparte passed through Lyon after his victory at Marengo and laid the foundation stone for new buildings. This prompted the new name change of Bonaparte Square which later became Napoléon Square.

It then became Louis-le-Grand Square again until 1830 when was decorated with a new statue of Louis XIV. Made by the sculptor Lemot, it was unveiled in November 1825. It was only under the Third Republic that the square took its current name of Bellecour Square

As the main square of Lyon city, everyone recognizes and defines Lyon by this stunning place. It is indeed one of the first places every visitor will explore when they arrive in the city of Lyon.

Our Local Tip for Visiting Lyon

If visiting during the summer, head towards Terreaux Square in the evening and enter a random bar, order a coffee and sit on a terrace next to the Bartholdi’s Fountain. Enjoy the bustling of people, the trickling of the fountain, the dimmed lights, and, of course, your coffee! 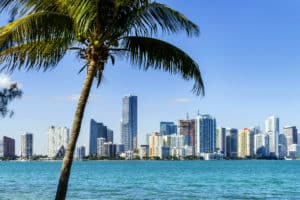 Miami, Florida: 15 Spectacular Things to do in the City of Magic