Dermot Kennedy Life & Music: From busking on streets to sold out stadiums 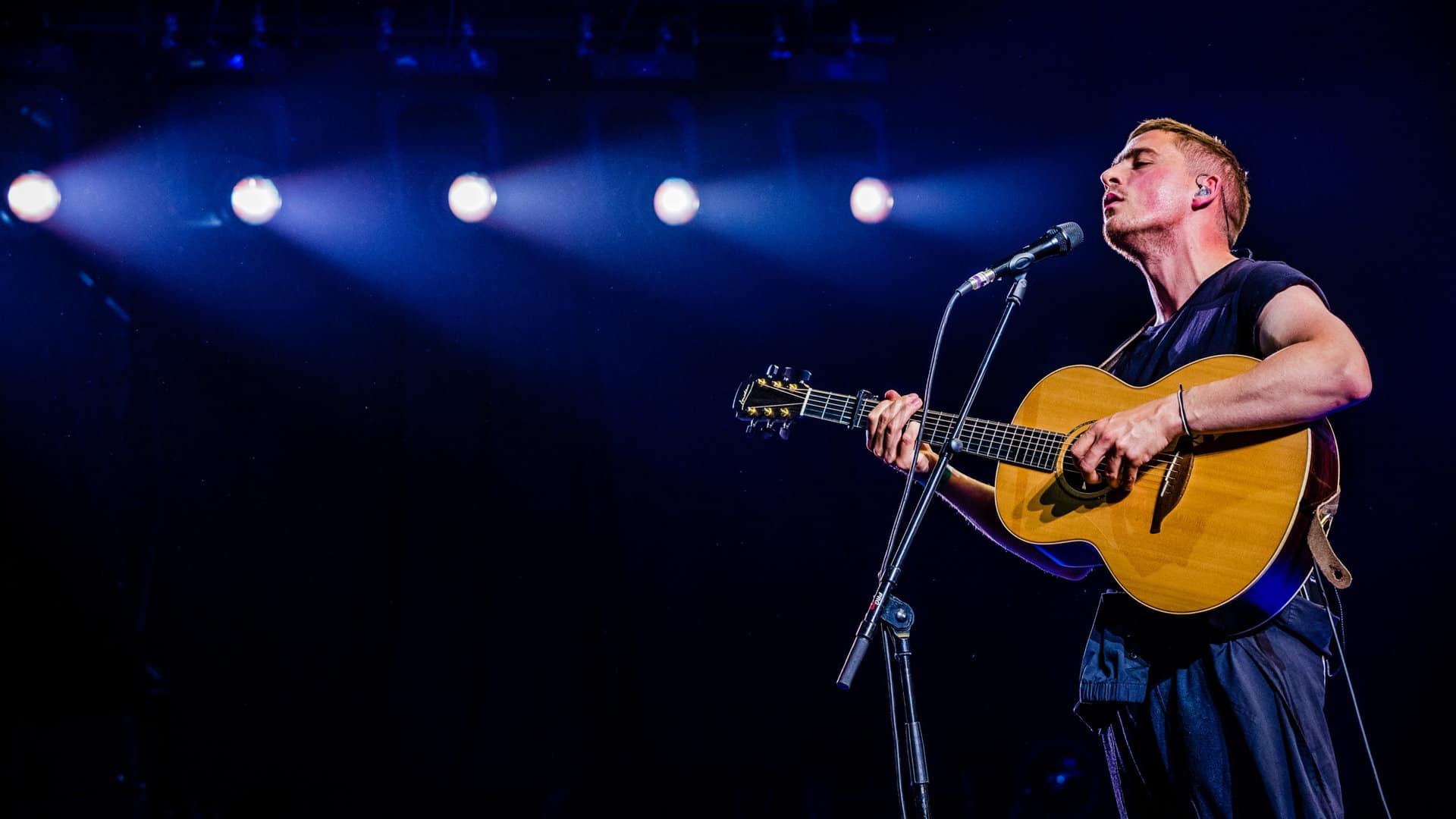 Dermot Kennedy is an Irish singer-songwriter hailing from Rathcoole, Co. Dublin. Rathcoole is a suburb village in the South West outskirts of Dublin city, only a stones throw away from the Wicklow mountains . Kennedy started to play guitar and write songs at a young age.

Dermot gained popularity as a solo artist after the release of his 2017 EP ‘Doves and Ravens’. His album Without Fear reached #1 in the Irish and UK charts, and has been streamed online over 1.5 Billion times.

Dermot Kennedy features on our list of the best Irish musicians of all time. Who else do you think is on the list? Let us know in the comments below!

In this article you’ll find:

The Road to Success

What may seem to an outsider as overnight success, Dermot Kennedy’s rise to stardom was actually close to a decade of hard work. From the age of 17 Dermot began to busk and perform at open mic nights.

During his youth Dermot loved everything soccer, a Manchester United fan who idolised Roy Keane, a fellow Irish man who played midfield for the Red Devils. When he got his first guitar at age 10, a new passion began to form.

Kennedy went to Maynooth University for 3 years to study classical music, combined with his ongoing busking and open mic performances, he was constantly honing his craft.

Before his solo career Dermot Kennedy was part of the band Shadows and Dust, performing alongside a group of 4 including Micheál Quinn who is the current drummer for Dermot. The sound of Shadows and Dust is reminiscent of Dermot’s iconic poetical lyrics.

The band went their separate ways and not long after Dermot’s solo career would take off. Some of his success can be accredited to his popularity on streaming services such as SoundCloud and Spotify. Dermot was featured in Spotify’s discover weekly playlist early in his career which helped to grow his audience, especially overseas.

Dermot gained popularity as a solo artist after the release of his 2017 EP ‘Doves and Ravens’. His album Without Fear reached #1 in the Irish and UK charts, and has been streamed online over 1.5 Billion times.

Dermot Kennedy’s style is a mix of traditional acoustic folk with a fresh hip hop sound.

A major influence on Kennedy’s unique style was Mike Dean an American hip-hop producer, best known for recording and mixing songs for some of hip hops greatest; Kanye West, Tupac and Jay Z to name a few. Mike Dean had won 5 Grammys working with Kanye West as a producer, mixer and songwriter.

Dermot released a mixtape called ‘Mike Dean Presents: Dermot Kennedy’ in 2018. The collaboration with the acclaimed producer feature elements of his recognisable hip hop and synth style. It did not stop Kennedys work from being primarily folk inspired; instead it elevates the music and allows the songs to transcend genre.

Kennedy credits Belfast musician Van Morrison as one of his biggest inspirations, even going so far as to perform the icons hit Days Like This for RTÉ’s The Late Late Show

Kennedy often cites other Irish artists as well as international hip hop performers as his main influences; it makes sense that a genre merging artist would have varied tastes, from Hozier, Damien Rice, Glen Hansard and Bon Iver to Stormzy, J Cole and Kendrick Lamar.

Songs included in the complete edition are:

Dermot’s latest album Sonder will release on the 23rd of September 2022, and we can’t wait to listen to the next chapter in the Irish musician’s discography!

Here are some of the highlights of Dermot Kennedy’s impressive career.

In 2017, Dermot released his EP Doves and Ravens to much acclaim.

The Major highlight of these two years was the release of Dermot’s first album ‘Without Fear’ to commercial and critical success.

Touring the United States, Australia and Europe to sold out audiences was a major career highlight for the Irish singer. Performing at Lollapalooza in 2018 as well as Coachella and Glastonburry in 2019 were major venues every artist strives to perform on.

An extremely difficult year for artists because of the Covid 19 pandemic, Dermot saw continued success, being nominated in the ‘Best International Male’ category at the BRIT awards in 2020. In the same year he hosted one of the biggest ever selling live streamed shows of all time, performing with a full-band in the Natural History Museum in London.

A regular philanthropist, Kennedy combined his love of football with raising money for charity. He did so by playing for Soccer Aid which raised money for UNICEF UK. He was praised for his performance, winning man of the match.

Kennedy was the winner of the RTÉ Choice Music Prize Irish Song of the Year 2021 for his hit single ‘Better Days’, a hopeful melody in the wake of the pandemic.

Kennedy collaborated on the Metallica tribute charity album The Metallica Blacklist, appearing alongside artists such as Sam Fender, Miley Cyrus and Pheobe Bridgers. He covered ‘Nothing Else Matters’ for the collection.

As life after Covid began to flourish Kennedy finally began headlining shows throughout Ireland, including locations such as St Anne’s Park in Dublin as well as Cork, Kerry and Belfast in 2022.

Touring the USA and Canada was another major milestone in Dermot Kennedy’s career as his audience continues to grow overseas.

The release of Sonder, Dermot’s second studio album in September to high anticipation.

Don’t tell me this is all for nothing

I can only tell you one thing

On the nights you feel outnumbered

Baby, I’ll be out there somewhere

Power Over Me – Official Music Video

Power Over Me Lyrics

Have you enjoyed our article on the life and discography of Dermot Kennedy? Which Irish artist would you like to see next, Let us know in the comments below! For information on shows, merch and much more you can visit Dermot Kennedy’s official website.

If you would like to find out more about Co. Wicklow which is home to the eponymous Wicklow mountains, a source of inspiration to Dermot Kennedy, we have plenty of guides including, the spectacular views of Bray Head , Wicklow National Park, the Kilmacurragh National Botanic Gardens, Kippure Adventure Centre, and even the Haunted Wicklow Gaol.

For more articles about Irish music and culture why not check out:

The Rusty Oven, Dunfanaghy: The Best Sourdough Pizza in Ireland since 2013