Close X
Home/Ireland/Darina Allen: One of Ireland’s Most Successful Chefs

Darina Allen: One of Ireland’s Most Successful Chefs 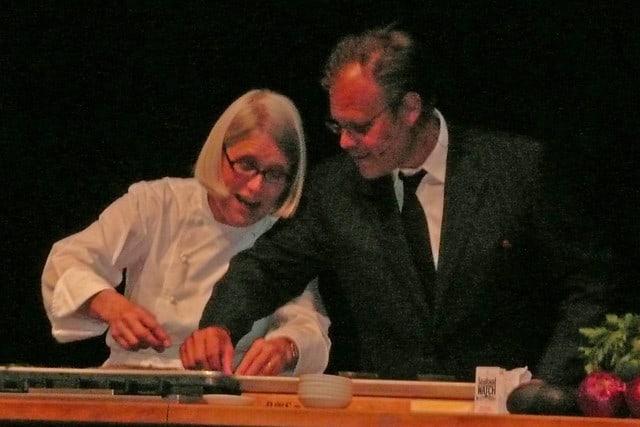 If you are in any way a fan or follower of the Irish cookery scene, you might have heard of the name Darina Allen, if not you will now.

Darina Allen is one of Ireland’s most successful chefs as well as a best-selling author, who also presented her own cooking show for nine series called ‘Simply Delicious’.

She has also established the renown Ballymaloe Cookery School in 1983, along with her brother Rory O’Connell, which continues to be a success to this very day. At the school, she enjoys passing on her experienced knowledge to eager students.

Darina Allen isn’t short of talent with over 10 original (some awarding winning) books under her belt and the host to many Television shows throughout Ireland and the UK.

She certainly deserves the title as one of Ireland greatest chefs. Keep reading to find out more.

Darina Allen Story  – How She Followed Her Dreams of Cooking

In 2018, Darina Allen reached the grand age of 70 but still has a huge passion for all things food. It all started in Culohill, County Laois, when she was born in 1948, the eldest of nine children. She has often claimed that she was inspired to pursue cooking through her own mother and Irish Michelin award winner, head chef Myrtle Allen. Darina later in life would marry Allen’s son.

“Mummy was like Myrtle, she loved cooking and the whole joy of putting meals on the table… a woman who was always curious, always interested in all sorts of things and I think I learned that from both of them.” –  Darina Allen

Darina attended a boarding school in County Wicklow before she eventually went on to train in hotel management in Dublin. When she was at school, the nuns working there would encourage the young ladies to aim for proper careers within the law, science, and medicine industries but all that she was ever interested in was cooking.

Although she did follow a degree in Hotel Management, when she graduated, she chose to fully pursue her passions for cooking and competed for a cooking post, when at the time the only chefs in Ireland were men.

For a while, she struggled to find a break within the industry until a college lecture referred her to a farmer’s wife who just opened a new restaurant in Cork.

This, of course, turned out to be Myrtle Allen, who gave Darina her first job as the ‘lady cook’ in her Ballymaloe House back in 1968.

Darina has often hailed Myrtle for teaching her new and exciting things around cooking, a completely new philosophy of cooking than what she was taught at college. She learnt to cook everything from scratch using the best of Irish produce.

“I was like a sponge, I couldn’t get over Myrtle, we literally cooked side by side and every day there was masses more to learn.”  – Darina Allen

In 1970, Darina married Tim Allen, the son on Myrtle and together they had four children. They work on a family horticulture business but sadly due to a horrific oil crisis it meant they were no longer suitable to heat glasshouses.

However, this led her, her brother and the Allen family open up the famous Ballymaloe Cookery School in 1983. The success of the school was second to none and is considered as one of the most admired private cooking schools in the world, drawing in people all around the globe to learn alongside these talented and creative Irish cooks.

Just a few years later, Darina Allen was asked to audition for a new cookery show ‘Simply Delicious’ for Irish broadcaster RTE. Turning out to be a quick success for Darina that panned nine amazing series and allowed her to create a successful series of books that help her become a notable Irish cookbook author.

The series not only made a huge difference in Darina’s life as it helped to bring her amazing cooking expertise to the world but as well as regular people who wished to learn to cook in a way that wasn’t complicated. Her cookbook provided easy but delicious recipes to follow that people really enjoyed.

Darina Allen also took a keen interest in the impacted conventional farming was having on the quality of Irish Produce as well as the environment. So she made the decision to move her cooking school to an organic farm in Shanagarry in the ’90s.

Later, she was the main force behind setting up a ‘Farmers Market Movement called ‘Slow Food’ in Ireland but was originally founded in Italy. Slow Food was created to help encourage a slower and healthier approach to producing and cooking foods, which is an active movement in more than 160 countries worldwide.

As well as this Darina is the president of the East Cork Convivium of Slow Food, through their educational fund, she runs a local primary school programme to encourage the local children to learn about food and how it gets from the garden to their plates.

She also helped to create the Ballymaloe Literary Festival of Food and Wine in 2013, which welcomes a fantastic lineup of world-renowned chefs and writers; its one of the top culinary events in Ireland.

Her best selling books include ‘30 Years at Ballymaloe’ which won the Cookbook of the Year Award at the Irish Book Awards in 2013 and Forgotten Skills also the winner of the Andre Simon Food Book of the Year in 2010.

The Award-winning Cookery School has played a huge role in delivering exceptional culinary education to students from around the world. Since 1983, the cookery school has offered people a place to come and develop their cooking skills through traditions passed down by the Allen family.

Ballymaloe Cookery School offers a 12-week certificate course and has been internationally recognised in helping to begin the journey of many successful chefs and food writers that we now know.

Darina Allen is successful in her own right, she has worked hard and turned her passion into a successful cooking career. Check out the Ballymaloe Cookery School for more on Darina and her amazing recipes that you can also try yourself.

Do you love cooking as much as we do? Feel free to comment below your favourite chefs from around the world, your favourite food or even a favourite restaurant. We can’t wait to hear your comments.

If you enjoyed this, check out some of our other blogs: