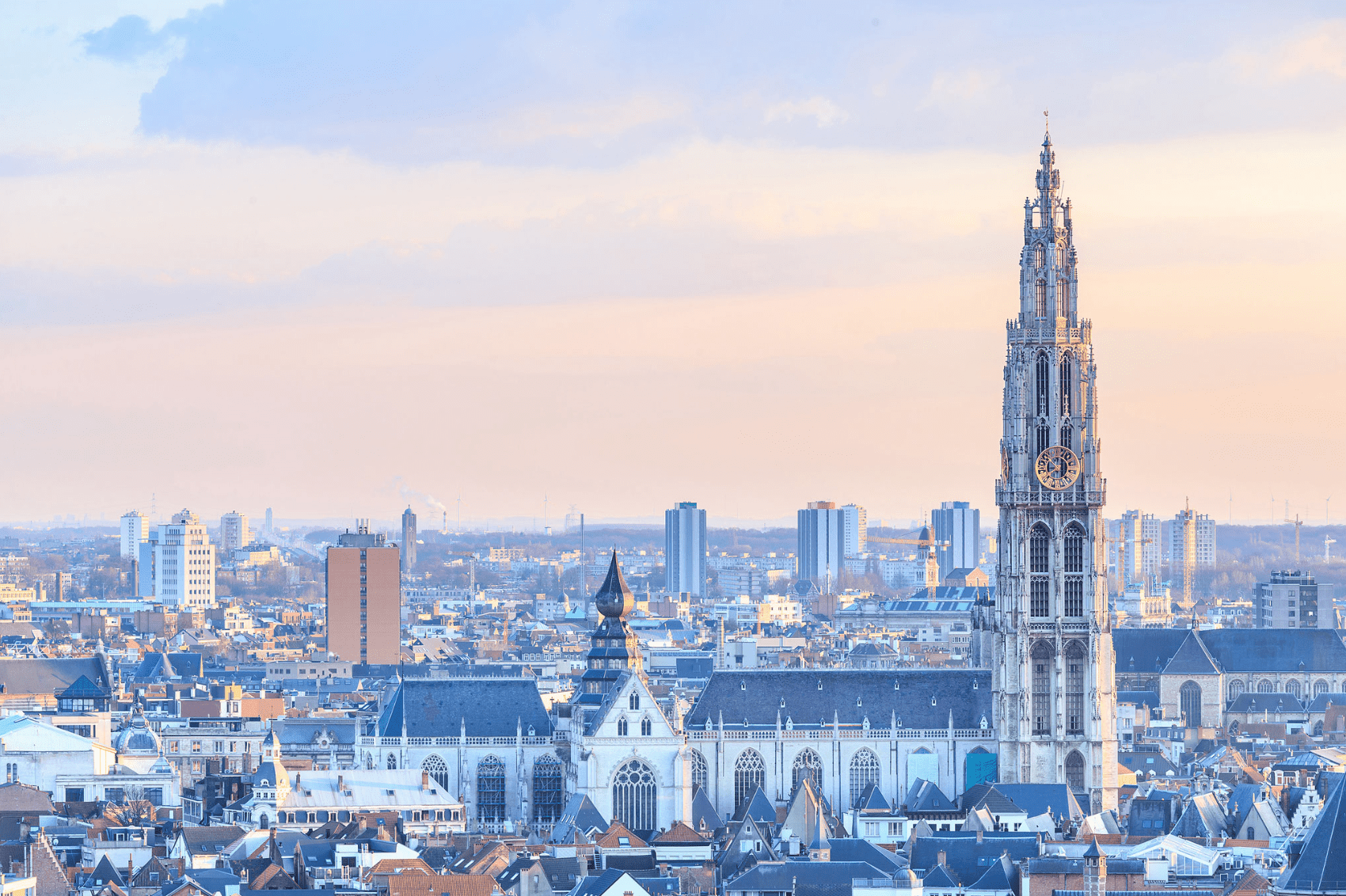 Belgium is a very multicultural country due to the fact that it is home of the European Union, making it a vibrant and multilingual country. Located in Western Europe, to the north it has a border with the Netherlands, to the east with Germany, to the southeast with Luxembourg and to the southwest with France. Its three official languages are French, Flemish and German however English is widely spoken across the country. Brussels is the capital city of Belgium and the largest city in the country.  Other major cities include Ghent, Bruges, Antwerp, Leuven and Dinant. The country is divided into three different regions: Flanders in the north, Wallonia in the south and the Brussels-Capital region.

Belgium is renowned for its beautiful main cities, which are very historical and are worth visiting. Their amazing architecture will definitely take you on a trip to the past.

Ghent is a very accessible city, it is only 30 minutes away from Brussels central station by train. Trains run every 30 minutes and the cost of the train tickets range from €10 to €15. The centre of Ghent is very close to the station making the city centre walkable.

As Ghent is part of the Flemish region the most spoken language is Flemish. Ghent is the third-largest city in the country with a large student population and a strong reputation for its research programs. Ghent is a beautiful city to visit at any time of the year, the activities may change from one season to the other but no matter what season you visit, you can enjoy a relaxing stroll around this medieval city whilst drinking a hot chocolate or a cold beer.

Just some steps away from the train station, Citadel Park is one of the most beautiful parks in Ghent. The park was created in 1875 however prior to its creation, the Dutch citadel of Ghent stood in the site and later the site was used as an infantry and artillery barracks. The Citadel Park has extensive green areas, a playground for children, pathways, a bandstand and a man-made waterfall.

The Castle of the Counts

One of the most popular and outstanding attractions in Ghent is the Castle of the Counts. It sits on one branch of the river Lys. The original castle was built in 1180 by the Count of Flanders Phillip of Alsace. Philip and his wife Elizabeth lived in the Castle from the years 1143 – 1191. The medieval castle contains a moat and provides beautiful views of the city and the river.  It is highly recommended to do the audio visit, as the story of the castle as told in a humorous way by a local comedian who takes you on a tour all around the castle even impersonating the Count of Flanders whilst telling you about his time living in the castle.

After being the residence of the Counts of Flanders, the castle was used as a court, as a prison and as a torture site from 1353 to 1491 and the castle still holds a small collection of torture equipment. After the castle was sold it then served as a factory and as a cotton mill. The castle underwent some changes and repairs turning it into what it is now a Museum. If you want to know more about the castle and its mysterious past this is definitely a site you should see.

Adventure in Ghent With A Boat Trip or Kayak

The river Lys is one of the best attractions in Ghent and in the summer you can opt to take a boat tour to explore the city and learn more about the history of the main buildings of the city.  Alternatively, you can even choose to explore it on board a kayak. If you want to know more about the history of the old city centre the boat tours are ideal.  The information is provided in Flemish, French and English and German reflecting the multicultural nature of the country.

During the summer months, a temporary painting exhibition is set under one of the bridges that cross the river with an insightful photography exhibition documenting the history of Ghent.

Bruges is a very accessible city, the quickest access is via train and is situated only 1 hour away from the Central Station in Brussels with trains running every 25 minutes.

Bruges is a beautiful city to visit at any time of the year but most magical over the Christmas period, making a trip to Bruges an unforgettable one.

Belgium is famous for its culinary delights including delicious fries, chocolate and beer. Belgians are rightly proud of their culinary expertise and have even created some museums to celebrate this.

Potatoes are a staple part of the Belgian diet and it is common to find food chains that sell fries all over the country. As a result of their popularity, they have become a Belgian emblem and in Bruges, they even have their own Fries Museum. This museum is the only one of it’s kind in the world so is well worth visiting. The museum provides information about the origin of potatoes,  the different types and highlights the type of potatoes that are suitable for making fries. In the museum, you will also learn the real origin of the fries is believed to be of French origin and many other fascinating facts including how to pick and store potatoes at home and the ideal temperatures for storage as well as many useful recipes using potatoes.

So if you are interested in some fun facts about potatoes, this is a museum you must visit!

If you want to discover the history of the main buildings and some interesting anecdotes, boat trips are the best option. The tours are carried out by friendly locals who will share with you many of the magical channels and beautiful buildings that surround the river and romantic bridges such as the Saint Boniface Bridge, the oldest bridge in Bruges. You can also admire the Church of our Lady, which is 115.5 meters high and is the second tallest of the world. The tourist guides will also recommend many nice bars and cafes where you can have a drink and enjoy spectacular views of the river and other nice buildings.

Leuven is 16 miles away from Brussels easily accessible by train and located in the Flemish region. It has a big student population as the KU University is one of the largest universities in Belgium and one of the oldest founded in 1425. Leuven is also home of the headquarters of one of the world’s largest beer brewer Stella Artois.

The town hall is one of the most iconic buildings in Leuven due to its striking Gothic architecture and prominent  Belgian and European Union flag. The town hall provided a ceremonial function, operating as a wedding Hall and is very common to see married couples having their wedding pictures at the front of the building.  It also contains a council hall and a foyer and there are regular guided tours in which you can learn the stories behind the 236 statues on the façade.

The Great Beguinage was listed as a UNESCO world heritage site in 1998. The site originated in the thirteenth century as a home for the community of unmarried religious women. Today the beguinage consists of small gardens, parks with sandstone built houses and is currently used to house students and university staff. The site also includes a small river where you can regularly view geese.

The garden was founded in 1738 by the University of Leuven before Belgium was its own independent nation. The main purpose was to grow herbs to use them in the medical field for university studies.

Nowadays the city of Leuven owns the gardens after buying the property in 1835. The garden covers an area of 2.2 hectares. In this garden, you will also find statues made of soil and many different species of plants. The garden which is free of charge is very popular amongst tourists and locals alike for its relaxing and calm atmosphere and beautiful nature.

If you arrive in Antwerp by train you will witness the stunning architecture of Antwerp station. Antwerp, Belgium’s second-biggest city and biggest port is also famous for its diamond district houses.  It has a reputation for being the fashion capital of Belgium and despite severe bombing during World War II, Antwerp retains a beautiful medieval centre, a vibrant entertainment, fashion and coffee shop culture and many beautiful architectural buildings.

This medieval building museum is the oldest printing press in the world, it has been a museum since 1876 and it holds some valuable manuscripts and a painting collection by some renowned artists. The museum is considered a UNESCO world heritage. It also has a library and a bookshop. If you visit Antwerp, this museum is definitely worth a visit.

Cathedral of Our Lady Antwerp

The Cathedral of Our Lady is a Roman Catholic cathedral. The cathedral holds paintings by Peter Paul Rubens, and by artists such as Otto van Veen, Jacob de Backer and Marten de Vos. The belfry of the cathedral is included in the list of UNESCO World Heritage Sites.

At the Rubens house, you can discover the life and work of Peter Paul Rubens,  a brilliant and versatile artist and a world-famous baroque style painter.

Coffee and Culture in Bristol

A How-To Guide For Teaching English In South Korea