Christmas in Ireland through the Present and the Past 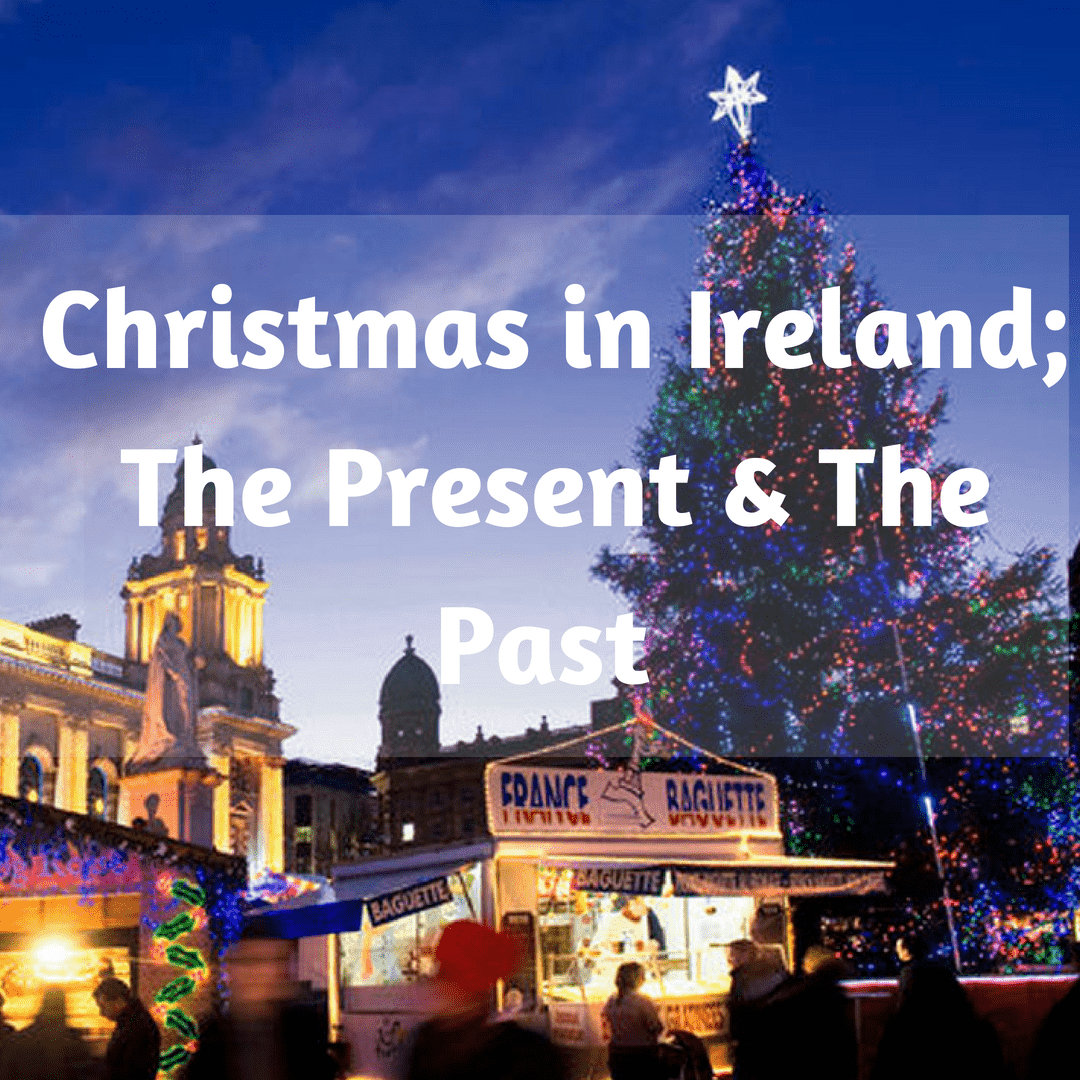 Winter lands upon our places and celebrations await us. Despite the blazing weather, we all passionately greet this season for the festivity it associates. All it takes for a cheerful atmosphere to take over is for December to arrive. You start listing out the new resolutions of the upcoming year and prepare for Christmas holiday. Every one of us appreciates holidays; they are times when we rest our bushed minds for a while. However, Christmas always have a warm spot in our hearts since our childhood. Celebrating this time is always entertaining; besides, it is a common celebration all over the world. On the other hand, Christmas in Ireland is a bit different. Surely, it shares similarities with other cultures yet there are significant differences. Every culture has its own traditions and customs and Ireland is no exception.

The Beginning of Christmas in Ireland

Well, no matter where you are or where you come from, you will definitely recognize when Christmas starts. The streets start taking that festive theme and all everyone decorates their house with the right ornaments. You, literally, start to feel the breeze of the holiday everywhere you go and you won’t help but smile. Anyhow, people around the world wait for Christmas as soon as October ends; more precisely when Halloween is over. It is like everyone is always looking forward to celebrating something every now and then. Still, around the world, Christmas starts by the end of December despite the long wait.

On the other hand, Christmas in Ireland comes earlier than the rest of the world. They literally are early birds. As soon as December arrives, Irish people celebrate before the rest of the world. Christmas in Ireland begins on the 8th of December and lasts until the beginning of the New Year. It is both the longest and largest celebration that Irish people have. It’s quite similar to the traditions of most of the Western countries in terms of decorations, shopping, and erecting trees.

On Christmas Eve, the entire workforce in Ireland comes to an end until the holiday is over. People by the lunchtime start performing out their plans. The work resumes after New Year’s Day.  Although the workforce all temporarily shuts down, some shops and public services remain to carry out the Christmas sales.

THE TWELVE DAYS OF CHRISTMAS IN IRELAND. CLICK HERE

Christmas in Ireland is not different from that around the world when it comes to celebration. But, Irish people seem to be fond of celebrations more than their fellow cultures. One day after the Christmas day, Ireland has a new celebration; St. Stephen’s day. Very few cultures, including Ireland, celebrate this day that takes place on the 26th of December. However, different cultures refer to it as the Boxing Day. Countries that celebrate this day are Ireland, South Africa, the United Kingdom, Germany, Canada, New Zealand, and Australia. The day has different names according to each culture. For example, Ireland calls it St. Stephen’s day while England calls it the Boxing Day. Moreover, Germany refers to this day as Zweite Feiertag, which literally means the second celebration.

On this day, people start collecting boxes that contain beneficial stuff for the poor. They keep the boxes in churches where they open the boxes and distribute the goods to the poor. This idea started around the Middle Ages. Some sources claim that the idea belonged to the Romans and they brought it to the United Kingdom. Over and beyond, the Romans used those boxes to collect money for the betting games of winter. They used them during their winter celebrations instead of charity work.

Around Ireland and the United Kingdom, there is an abundant number of small birds; the Wrens. They are actually the smallest birds around the towns. Wrens have loud singing voices that escorted people to call them the Kings of all birds. During the medieval times, people around Europe hunted this kind of birds for long years. There was even a legend about the wren that people kept telling for long times. This legend narrates the tale of a wren that sat on an eagle’s head while flying and bragged about out-flying the eagle.

Among the celebration traditions of Christmas in Ireland lies the Wren Boys Procession. It is a very old tradition that people perform on St. Stephen’s Day. The tradition is about killing a real wren and carrying it around while singing a specific rhyme. While laying the dead wren in a holly bush, men and women roam around in homemade costumes. They go from one house to another, singing and playing with violins, horns, and harmonicas. The Wren Boys Procession has disappeared since the early 20th; however, some towns still perform some of the traditions until now.

The Relation Between Christmas in Ireland and Religion

According to the Irish mythology, Christianity arrived in Ireland along with Saint Patrick. Ever since the country became a predominantly Christian one. Definitely, the dominance of this religion leaves a wide room for Christmas to play an important role in Ireland. On Christmas Day and Christmas Eve, people attend churches for religious services. Roman Catholics also perform a Midnight Mass and take time to remember the deceased souls with prayers. Additionally, they also decorate graves with holly and ivy wreaths on Christmas. It’s the Irish people’s way to show that the deceased people are never forgotten.

The Burning Candles of Christmas in Ireland

Like many countries around the world, Irish people care to decorate their houses for Christmas. They decorate their houses with traditional cribs as well as Christmas trees. Besides, people provide and receive gifts from one another. As much as they share similarities with Christmas celebrations around the world, they have their own differences too. In Old Ireland, people used to light candles and leave them on their window’s ledge on Christmas Eve after Sunset. The burning candle signifies that this house is welcoming the hospitality of Jesus’s own parents, Mary and Joseph.

The Feast of Epiphany in Ireland

With the arrival of the New Year, people have more than one thing to celebrate. They celebrate the New Year, the rest of the Christmas Holiday, and the Feast of Epiphany. It takes place on the 6th of January and Irish people refer to it as Nollaig na mBean. Over and beyond, some people call it the Women’s Christmas. Well, the reason behind that name is the reason that women take this day off; they neither cook nor do any chores. Instead, men do all of the housework while their women hang out to chat with their friends. Christmas in Ireland nowadays may not include this tradition anymore. However, some women still like to gather outdoors and enjoy each other’s company.

Other Traditions of Christmas in Ireland

Again, celebrating Christmas in Ireland is not that different from the rest of the world. But, every culture has its own themes and customs and Ireland is no exception. It shares some similarities and has its own difference in celebrations.  For example, Santa Claus is a global symbol of Christmas all over the world. Ireland celebrates by having its Irish Santa distribute gifts to the little owns in the holiday. He also played part in the Irish legends by being the first one to hire the leprechauns and introduce their species to the world.

The Story of Santa Claus and the Leprechauns

Leprechauns are famous fairies in the Irish legends. Christmas in Ireland had a lot to do with them, too. They used to live in the lands of elves and hobbits. Later, Santa Claus invited them to the North Pole for cleverness in craftwork, so they can work in his factory. They left to the North Pole and worked at a factory of toys.

While there, the leprechauns’ troublemaking nature took over. They hid the toys in a secret place while the elves were asleep. They kept laughing about it, thinking it was all fun and games. The following day, a storm hit the place and all the toys turned into ashes. Christmas Eve was only a few days away, so Santa Claus had no time to make more toys. He wouldn’t be able to deliver them on time. Thus, he exiled the leprechauns for good and they were bullied by every creature. Not only because of what they did, but also because their appearance was unusual.

Dinner of Christmas in Ireland

Celebrations always mean food. People around the world love to celebrate by indulging in special meals. Christmas in Ireland surely includes food too; it even had a large feast in every house. Some people claim that the meals cooked on Christmas in Ireland are bigger than all meals cooked through the year. For feasting on food, you definitely need large portions of foods and of different types.

Traditional Food for Christmas in Ireland

On Christmas Eve, every household starts preparing the huge dinner. They cook turkey and prepare vegetables alongside a large list of other goodies. Irish people celebrate by having their own Irish dinner, including homemade mince pies as well as a Christmas pudding. For the rest of the meal, you can binge on turkey, potatoes, different veggies, chicken, hand, and stuffed goods. These traditions have been trending since ages; however, in the modern times, there are some differences; slight ones though. A Selection Box is part of the Christmas dinner; a box full of chocolate bars that children enjoy. Irish people are always strict about the importance of having dinner first in order to get to the chocolate bar.

Christmas in Ireland is all about gathering and enjoying the holiday among the family and friends. For some entertainment, people either stay home and watch the finest Christmas movies or go shopping at the Grafton Streets. It is the time when literally everyone is happy and the lost souls are remembered.

Don’t forget to check out related blogs about Ireland that might interest you: The Globally Celebrated St.Patricks Day| Irish Wedding Traditions| Dive into the Finest Legends and Tales of Irish Mythology| Digging into the Secrets of Irish Pookas| History of Gaelic Ireland Throughout the Centuries|

Embark on a Journey of Entertainment in Al Fayoum Oasis

Delve into Some Interesting Facts about the Toasts of Ireland