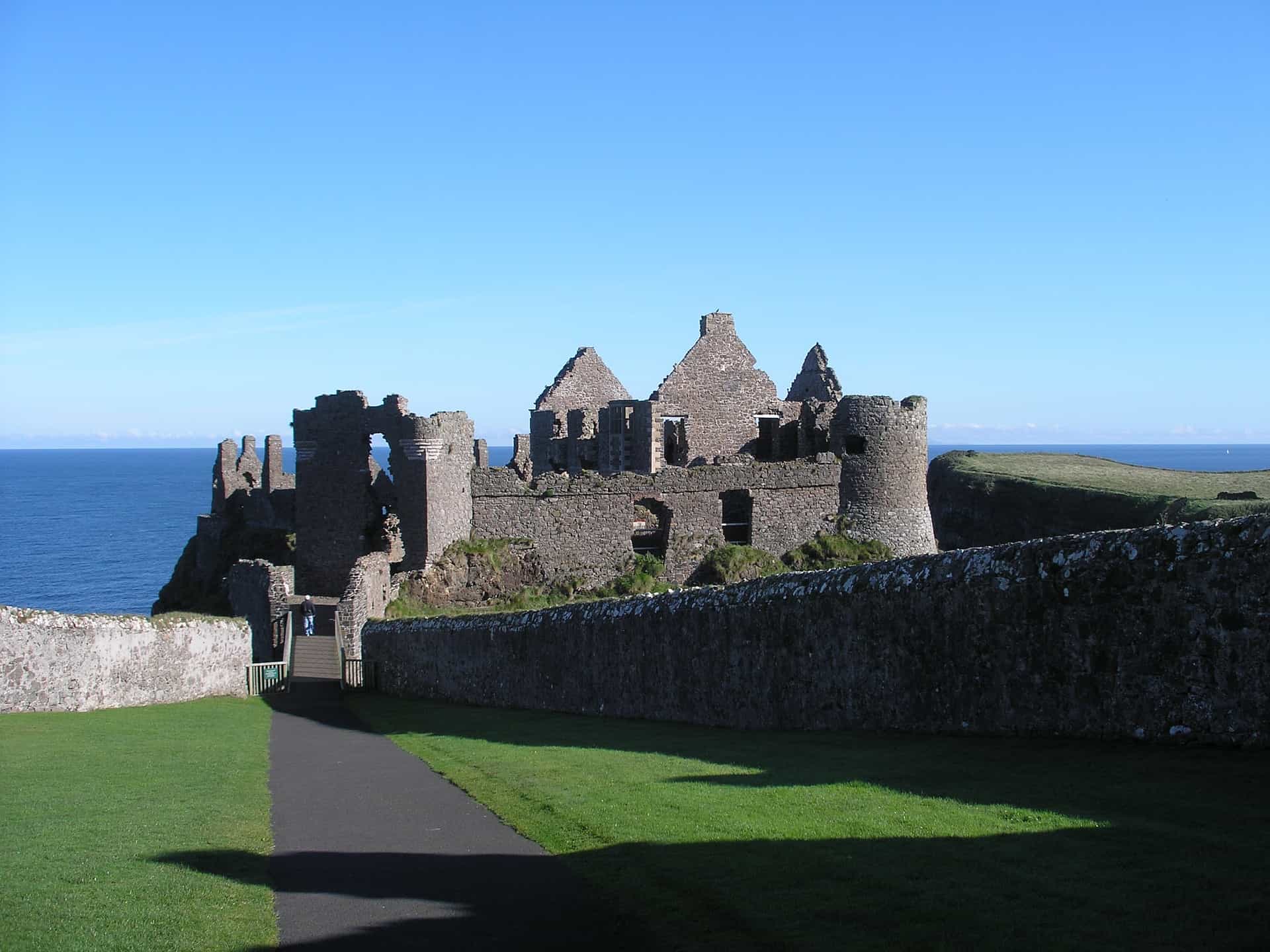 Bushmills is a village on the north coast of County Antrim, Northern Ireland. During the 17th century, it was given its name after the mills on the River Bush. Which many will know is also given to Ireland’s oldest whiskey brand. It’s a unique conservation village located on the causeway coast and its close to many amazing landmarks such as The Giants Causeway, Dunluce Castle, and famous Old Bushmills Whiskey Distillery. Originally known as Portcaman, the village dates back to the Norman era (1150-1520).

The first known record of the village was in William Boyd of Dunluce’s will, which dates back to December 9th in 1624. The will essentially gave permission for John Logan to erect a mill, which was established in 1608. When Dunluce Castle and the nearby village came to ruin and became abandoned in the mid-1600s, the parishes of Dunluce and Portcaman merged together.

The Macnaghten family of Dundarave was responsible for the building of a market, a hotel, a courthouse, a grain store and numerous houses in 1828. Their estate house was built by Sir Charles Lanyon and was originally called Bushmills house but was changed in 1847 to Dundarave.

Further additions were made to Bushmills town by the Macnaghtens, including a town square which was added to the market and a new bridge was built in 1840. These improvements resulted in an increase in the population and by 1891 to just over 1000 persons. Numerous mills were also built along the River Bush and the Bushmills Distillery. With the development of the Giant’s Causeway in the 1700s, Bushmills began welcoming more and more visitors.

In 1883, the world’s first hydroelectric railway began operating from Bushmills to the seaside resort of Portrush.

Dunluce Castle, near Bushmills, is a medieval castle in Northern Ireland, County Antrim. The castle is surrounded by very steep drops on each side, which is what drew the early Christians and Vikings to this place where an early Irish fort once stood. The Castle is under the care of the Northern Ireland Environment Agency.

In the 13th century, Richard Óg de Burgh, the 2nd Earl of Ulster, built the first castle at Dunluce. Historical resources first document the castle in 1513in the hands of the McQuillan family. The McQuillans were the Lords of Route beginning from the 13th century until they lost two major battles against the MacDonnells during the 16th century.

Situated one hundred feet above the ocean, Dunluce Castle was the seat of the chief of Clan MacDonnell of Antrim and the Clan MacDonald of Dunnyveg. In 1584, the Sorley Boy MacDonnell seized the Antrim Glens, swearing allegiance to Queen Elizabeth I and consequently his son Randal was made 1st Earl of Antrim by King James I.

Four years later, a ship from the Spanish Armada, dubbed the Girona, was shipwrecked on the rocks nearby. The ship was taken apart as the cannons were installed in the gatehouses and the rest of the cargo was sold and the funds were used to restore and expand the castle.

Although the castle dates back to the 13th century, a soutterain has been discovered in the area that dates back to 1,500 years ago.

The Importance of Dunluce Castle

This historic castle has been the site of numerous battles, over a one hundred year period it was besieged numerous times. It is also a location of many legends. A local legend states that at one point, part of the kitchen next to the cliff face collapsed into the sea.

According to a widely known legend, when the kitchen collapsed, only a kitchen boy survived the crash, as he was sitting in the only corner of the kitchen that did not collapse. However, the kitchen is still intact and situated next to the manor house. You can still see the oven, fireplace, and entryways into it. It wasn’t until sometime in the 18th century that the north wall of the castle building collapsed into the sea.

Another story revolves around Maeve Roe who was locked away by her father in the castle’s north-eastern tower for refusing to marry her suitor. However, she managed to escape with her true love and fled to Mermaids Cave where they fled by boat, but they were dashed against the cliffs. Maeve’s ghost is said to still sweep her prison tower.

Another legend involves the MacDonnells, who after their expulsion besieged the castle more than once until their forces climbed into the corner towers and hanged the English captain. His ghost is said to haunt a tower.

Dunluce Castle served as the seat of the Earl of Antrim until 1690. Afterward, the castle fell into ruin.

In 2011, archaeological excavations conducted in the area discovered the remains of the town of Dunluce, near Bushmills, which was destroyed during the Irish uprising of 1641.

The town was built in 1608 by Randall MacDonnell, the first Earl of Antrim. It may have contained the innovative housing in Europe during the early 17th century, which included indoor toilets which had barely been introduced in the rest of Europe at the time, and a complex street network based on a grid system. Visitors to the area can explore the cobbled streets and a Scottish merchants house, a blacksmith’s forge, a courthouse and a dungeon. There is also plenty of evidence of wealth and luxury, including coins from the period of Elizabeth I and Charles I.

One of the iconic historical figures linked to the castle is Winston Churchill who once owned the estate and it passed was passed onto his family.

The castle has actually inspired many literary works over the years, including the orchestral tone poem Dunluce (1921) by Irish composer Norman Hay, and it also thought to be the inspiration behind Cair Paravel in C. S. Lewis’ Chronicles of Narnia (1950–1954). The castle is also the subject of a 1990s song named “Dunluce Castle” written by George Millar and sung by the Irish Rovers.

The Dunluce Castle has also been featured in the HBO hit drama series Game of Thrones, doubling as the stronghold of Pyke on the Iron Islands.

The world heritage site known as the Giants Causeway is another attraction near Bushmills. It’s the most visited attraction in Northern Ireland due to its unique landscape of rock formations. As well as the impressive views one can see while they are there. You can check out the visitor centre that is located here to learn more about the history.

The Bushmills Distillery is a fabulous location to tour if you’re a fan of whiskey or not! It is considered one of the oldest working distilleries in the world. You can go on a guided tour of the distillery that includes whiskey tasting and a whiskey workshop. It also has an amazing gift shop with exclusive Bushmills merchandise and more.

Have you been to any of these attractions in Bushmills? We would love to hear your experiences.

Also, check out some of our other blog post that might interest you: Causeway Coast Trip, Giants Causeway Tour, Best Attractions in Northern Ireland, Where is Game of Thrones Filmed,The Legend of Finn Macool.