Close X
Home/European Region/Burano: The Vivid Italian Island You Should Never Miss Visiting When in Venice 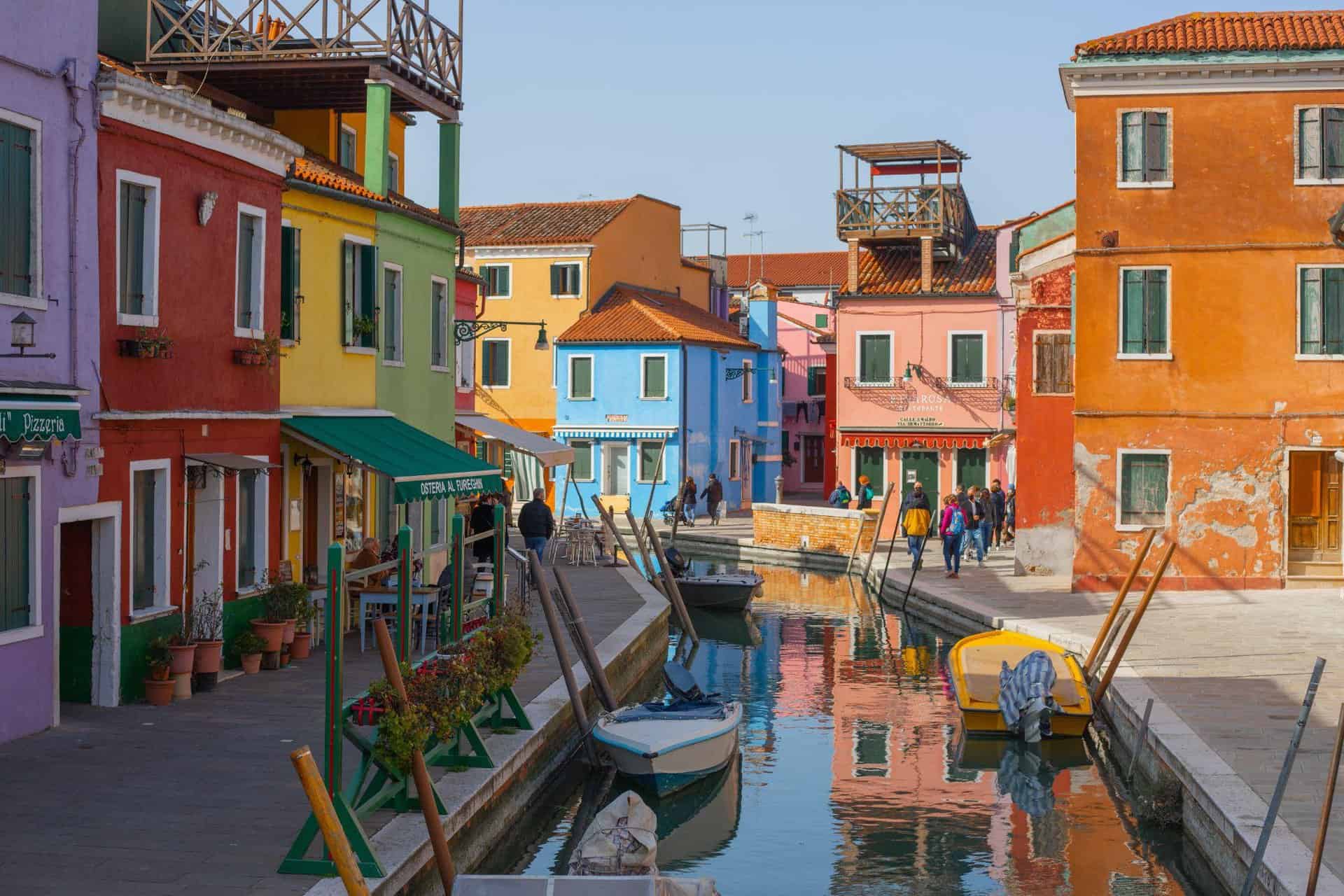 Explore the Venician Island of Burano

One can never get enough of Italy.

That pretty much is true as the Bel Paese country is abundant in everything that matches each traveller’s taste. From great historical sites and magnificent old cities to the beautiful countryside and alluring beaches and islands, not to mention the Italian cuisine which is a whole different, captivatingly delightful part of the Italian experience.

So, when people consider travelling to Italy, they usually think of the big cities. Rome, Naples, Florence, Milan, and Venice are all perfect places to enjoy a great vacation with lots of sightseeing, pizzas, pastas, and gelatos.

But what might not be receiving that much attention are the small, cosy, charming towns and islands scattered all around the country which can make a short stay even more enjoyable and unique.

Did you happen to watch Disney’s animated movie Luca that came out in June 2021? If you did, I bet you fell in love with the beautiful scenery of Portorosso, the water clarity, the vividly coloured buildings, the simplicity of life, and the feeling of relaxation that popped out of the screen and into your soul.

Have you not already imagined yourself strolling around such a cheerful town? Or having a swim in the clear water of the bay? Or maybe you wondered what Trenette Al Pesto tasted like and looked up the recipe?

Well, enjoying some quality time in a town like Portorosso is a very possible experience if you happened to spend your vacation in Venice. Even if Portorosso does not really exist in real life and was only made up for the movie, the real inspiration for the fictional town is just around the corner.

Here we give a short little guide for your one-day trip to the sparkling island of Burano.

Burano is a small, lovely, tranquil island located in the Venetian Lagoon in northern Italy. It is only seven kilometres away from Venice which means you should never miss visiting it while you are in the City of Water for it will add extra loads of joy to your trip.

Speaking of size, Burano is incredibly small with an area of just 210,800 m²

or 0.2 km². In other words, you can go all around the island on foot in a short amount of time. There are no cars or motorcycles in Burano which is rather fantastic.

In total, around 3000 people live in Burano. The island is subdivided into five districts or sestieri named after famous islands. San Martino Sinistro and San Martino Destro are right in the middle of the island and occupy quite a big area of it. San Mauro, Terranova, and Giudecca are the three other districts which are separated from the San Martinos by narrow canals; yet, are still connected to them by short bridges.

Much like in Venice, tourists can wander around in Burno either on foot or by gondolas in the canals.

Nearby island Mazzorbo is mostly considered a part of Burano and its sixth district. Both are connected by a wooden bridge called Ponte Longo or the long bridge though it is not long at all. The Ponte Longo bridge crosses a canal with a width of only 60 metres.

So what really makes Burano so special?

Burano is quite distinctive for multiple reasons. On top of those are the brightly colourful houses. That is a quite old tradition of the island’s original fishermen. According to some local stories, the fishermen did that because they wanted to distinguish their houses from their neighbours’. Other people believe that they only needed to be able to see their houses from offshore on foggy days which are a common weather condition in Burano.

Such brightly coloured houses got Burano listed as a UNESCO World Heritage Site as they preserve the authenticity of the island. Though they might look similar in design from afar, every house is quite unique.

Interestingly, if someone wishes to change the colour of their house, they have to ask for permission from the authorities first.

This makes up a big part of the Burano experience. Spending some quality, relaxing time, wandering around the narrow streets of the island, enjoying the great weather and the scenery of these beautiful houses, taking photos, and satisfying appetite with delicious local seafood dishes are all reasons why people like to come to Burano.

Another thing that Burano is quite famous for is lace making. This is the traditional craft of the island that goes all the way back to the 16th century. At some point in the island’s history, Burano was the hub of making and exporting lace to the rest of Europe. Now you can still find workshops and shops around the island selling beautifully tangled handmade lace products.

Thirdly, Burano’s distinctive seafood and local cuisine. Since its early development, Burano has been inhabited mostly by fishermen, making seafood the most popular type of food in town with mouth-watering Venetian fish recipes. One of the most famous seafood dishes, for instance, is the Burano Risotto di Gó which is an Italian rice dish cooked with the Ghiozzo pesce. That is a local fish roaming the waters around Burano.

Since it is very close to Venice, it takes only a 45-minute trip by boat to get to Burano. All you have to do is take the Venetian waterbus Vaporetto no. 12 from San Zaccaria stop near St. Mark’s Square in Venice which takes off almost every 20 minutes.

You can certainly take a water taxi which will be a lot faster but it is pretty expensive. A one-way trip to Burano can cost up to 140 euros. Vaporettos are way cheaper.

Burano is best visited in spring and autumn when the weather is usually good and clear. Summertime is also quite good; however, the island might be a little too crowded since flocks of tourists like to visit Venice during that time. So you would better avoid it then and also throughout the two-week Venice Carnival in February.

In such a high season, it can be pretty irritating having to wait long hours for the Vaporetto or trying to make your way through the crowds in the narrow streets of Burano.

Where to go in Burano

Though you can definitely spend a couple of days in town in one of the multiple cosy hotels, a one-day trip is quite enough since Burano is pretty small. Once you land on the island, you can head directly to the centre of the town Piazza Baldassarre Galuppi or the Square of Baldassarre Galuppi which, by the way, was named after the famous 18th-century Venetian composer.

Once you are in the Piazza, you can go to every other site. The square is more or less big and also has multiple shops, restaurants, cafes, and many gelaterias.

Here are some interesting sites you can enjoy visiting in Burano.

Lacemaking is such an extremely complicated craft. It takes so much time to create a small piece of cloth, let alone a complete product. Despite that, Burano has been famous for making genuine, high-quality, and extremely beautiful lace products, some of which can be worth up to thousands of euros.

That is why there is the Lace Museum or Il Museo del Merletto to honour the island’s very distinctive craft and document lace-making throughout the island’s history. The museum displays beautifully entangled handiworks of different sizes, designs, and colors. There is also a school for teaching lace making techniques.

The museum is located in the Piazza Baldassarre Galuppi. It is open all week long from 10:00 am to 4:00 pm except for Mondays, though the times might change a little bit different in winter. The museum is closed on public holidays and around Christmastime. The entrance fee is 5 euros for adults and 3.5 euros for kids, students, and old people. That being said, those prices might be a little different during your time of visit.

Or the Church of San Martino.

Right in the heart of Burano and only a few-minute walk from the Piazza Baldassarre Galuppi is the Roman Catholic Church of San Martino, the only religious place in Burano. It was built in the 11th century and underwent renovation multiple times until it settled on the current look somewhere around the end of the 16th century.

The church itself might not be very big; yet, what makes it quite exceptional is that it features two original artworks by famous artists. The first one is La crocifissione or The Crossification by the Veteran artist Giovanni Battista Tiepolo which he painted in the 18th-century. The other original artwork is the Icon of Madonna di Kazan from the 19th-century Russian town of Kazan.

It seems like Italy has something for leaning towers, the famous one being in Pisa and there is another one here in Burano.

Il Campanile Storto or the Leaning Bell Tower is another distinctive worth-visiting site in Burano. It actually is a part of the Church of San Martino. The square-shaped bell tower is 53 metres tall. It is believed that the tower is crooked due to land subsidence. This resulted in the tower leaning around 1.83 metres relative to its axis.

A trip to Venice does not have to be limited to Venice but it should definitely allow extra more days of wandering around the Italian islands of the Venetian Lagoon. Burano, one of such islands and the most populated of them all, is perfect for a one-day escape from the hustle of noisy, crowded Venice.

The island’s authentic vividly coloured houses, the friendly locals, the beautiful canals, and the other interesting attractions will add extra gorgeous memory to your well-spent Italian vacation so make sure you free up a day to enjoy it.

A Guide To Visiting Antigua, Guatemala: The Best 5 Things To Do And See