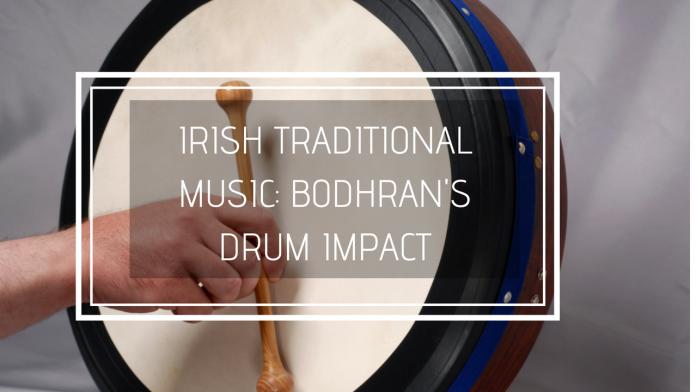 Ireland is a fascinating place that is known for a wide diversity of eccentric things. You should consider visiting this land if you’re looking for a history like no other. We all love celebrating and the Irish heritage has got more than a few things to celebrate. While food is always part of any celebration, music is another one that is hard to give up. This is a standard rule all over the world; songs and melodies set the right mood for festivity and merriment. Given the eccentricity of the Irish heritage, the music is one of its kind. Pretty much like everything in Ireland, you can recognize the Irish music through the instruments played. Each culture may be popular for a certain type of music, but Ireland’s popular for musical instruments on its own. Bodhran drum is one of Ireland’s most prevalent instruments; one with a prominent long history.

THE DISTINCTIVENESS OF THE IRISH MUSIC

Music has always been an expressive tool for the words of the heart. It can easily illustrate those indescribable emotions that you hardly find the right words for. Besides, the melodies and tunes can help you guess the destination from which they come. Those are some of the reasons that music is mesmerizing; however, there are lots of more factors. Ireland has always been popular for the eccentricity of its music. That is because not only they use specific rhythms and tunes, but also for the instruments they use. Bodhran drum and tin whistle are two of the main instruments used in the Irish folk music. However, they definitely play other instruments that the whole world do, but the bodhran solely belongs to Ireland.

Ireland has always been distinguished by its unconventional heritage and peculiar traditions. It is famous for a plenty of things that makes it stand out among the European societies. Pretty much as it has a distinct Irish food type, the same goes for its matchless music. So, let us take a look at the nature of the bodhran drum and the history associated with it.

WHAT IS THE BODHRAN DRUM?

The bodhran drum is a frame drum which diameter can vary from 25 cm to 65 cm. Moreover, the sides of the drum are a bit deep that they reach about 10 cm in depth. The depth can actually reach up to 20 cm as well. While it may quite much resemble the appearance of any other drum, it has its own differences as well.

Those differences can help you easily recognize the bodhran when you see one. They include having one side of the drum attached to a goatskin head. Sometimes, the Irish use skins of other animals rather than the goats; however, the goatskin head is the most popular. On the opposite side of the attached head, the side is open. This little open allows you to place one hand on the inside of the drum head. Beating on the inside gives you space to have control over the resonance and pitch. There are also more features that incorporate the mechanical tuning systems, giving the instrument a wider range of performance. The features can also include a hex key found in the skin of the bodhran drum. This key can either loosen or tighten that bodhran skin. Controlling the tightness of skin helps during the performance; it depends on the needed conditions.

People sometimes confuse the bodhran drum with other percussions. However, the bodhran has a distinctive appearance. It is mostly recognized through the goatskin head attached to one side of the drum. Moreover, there are other percussions that the Irish folk music uses and they are quite prominent too. One of those percussions is the Bones. The latter is actually a piece of wood that has a curved appearance and it has got two slender. Along with it comes a pair of spoons that together make a clacking sound. The player shall hold the spoons in one hand and strike them together.

There are also other non-traditional hand drums that players use in the Irish music. Those drums include both the West African Djembe drum and the Caribbean Bongo drum. The two drums are not always essential in any traditional Irish music. However, they are added during sessions where the bodhran is the essential instrument. They help in variation and combination along with the bodhran, producing lovely beats and rhythms.

MEANING OF THE WORD

The pronunciation of the name of this instrument can be confusing sometimes. However, it is relatively easy once you learn it. The drum is pronounced as Boran and sometimes you can find it written as bodhrain or bodhrans. The latter are actually the plural forms of the word. Above and beyond, the meaning of the word’s been through several debates; only for one side to win at last. One of those meanings that a bodhran maker suggested was “Skin Tray.” The guy’s name was Caramel Tobin and he was among the makers of the bodhran drum during the 3rd generation. Tobin also claimed bodhran means a dull sound; like that that the drum produces.

On the other hand, the truth is that the word derives from a Gaelic word, Bodhar. Most of the researchers seemed to agree upon this fact. The meaning of the word bodhar is “deaf”; the word is found in both modern Scots Gaelic and modern Irish. However, some sources claim that the Irish Gaelic has a wider prospect to the meaning of the word. These suggestions include the word bodhran also means troubled, numb, confused, unclearness, and bothered. Most, if not all, of those words, are quite similar to Tobin’s suggestion.

THE HISTORY OF THE BODHRAN DRUM

Apparently, the bodhran drum has been a new introduction to the music world, in general, and Irish music, in particular. Ever since it came into being, the tambourine was no longer around. The reason for that was the fact that the bodhran drum adds a modernized touch to the Irish traditional music. Some sources claim that the wrenboys were the first to use this drum on St. Stephen’s Day. However, the real popularity of the drum started in the 60’s by the musician, Seán Ó Riada. Conversely, most of the people claim that the bodhran is an ancient Irish instrument. But, there were never any sources that backed up that statement. Besides, there are claims that state the instrument originated in Africa and went to Spain right before landing in Ireland. Others sources profess that the bodhran is originally an Asian instrument that the Irish people took the tradition from.

The origin of the drum remains mysterious and ambiguous. It also featured in Arabic societies. Still, it’s undisputed that ever since the instrument became popular in the 70’s, it became essential in Irish music. The tambourine had vanished ever since the appearance of the bodhrans. Thus, people do believe that bodhrans are the evolution of the tambourines. Again, it was most popular among the wrenboys, but it seems to date back to some older time. Daniel Maclise was a painter that existed in the 19th century. He once painted a picture of a Halloween party where people play bodhran drum.

Why not check out the history of the Londonderry Air – also known as Oh Danny Boy. One of the most popular songs globally over the past 100 years.

Linenopolis: The Linen Quarter of Belfast

0
The city of Belfast has been known for many things, but one of its proudest products is something that the city would be nicknamed...
Read more
United Kingdom

0
At ConnollyCove we are big fans of Lighthouse, there is something alluring and magical about them, we have already covered some stunning lighthouses in...
Read more
County Antrim

0
Unlock all the shrouded mystery in such a remarkable site of the Giant's Causeway. Get to see the remains of a bygone volcanic age...
Read more

1
Reincarnation is a concept adopted by many cultures and religions around the world by which they believe that a person's soul can be reborn...
Read more
County Wexford

0
What's the next attraction you need to visit in County Wexford? Well, why not check out the Irish Agricultural Museum. It offers one of...
Read more
Italy

0
Travelers yearn for adventures and unprecedented experiences. One of the best destinations to visit in the world is Italy. It is the land of...
Read more