Close X
Home/The World/Bilbao: 13 Enjoyable Things to do for a Wonderful Vacation 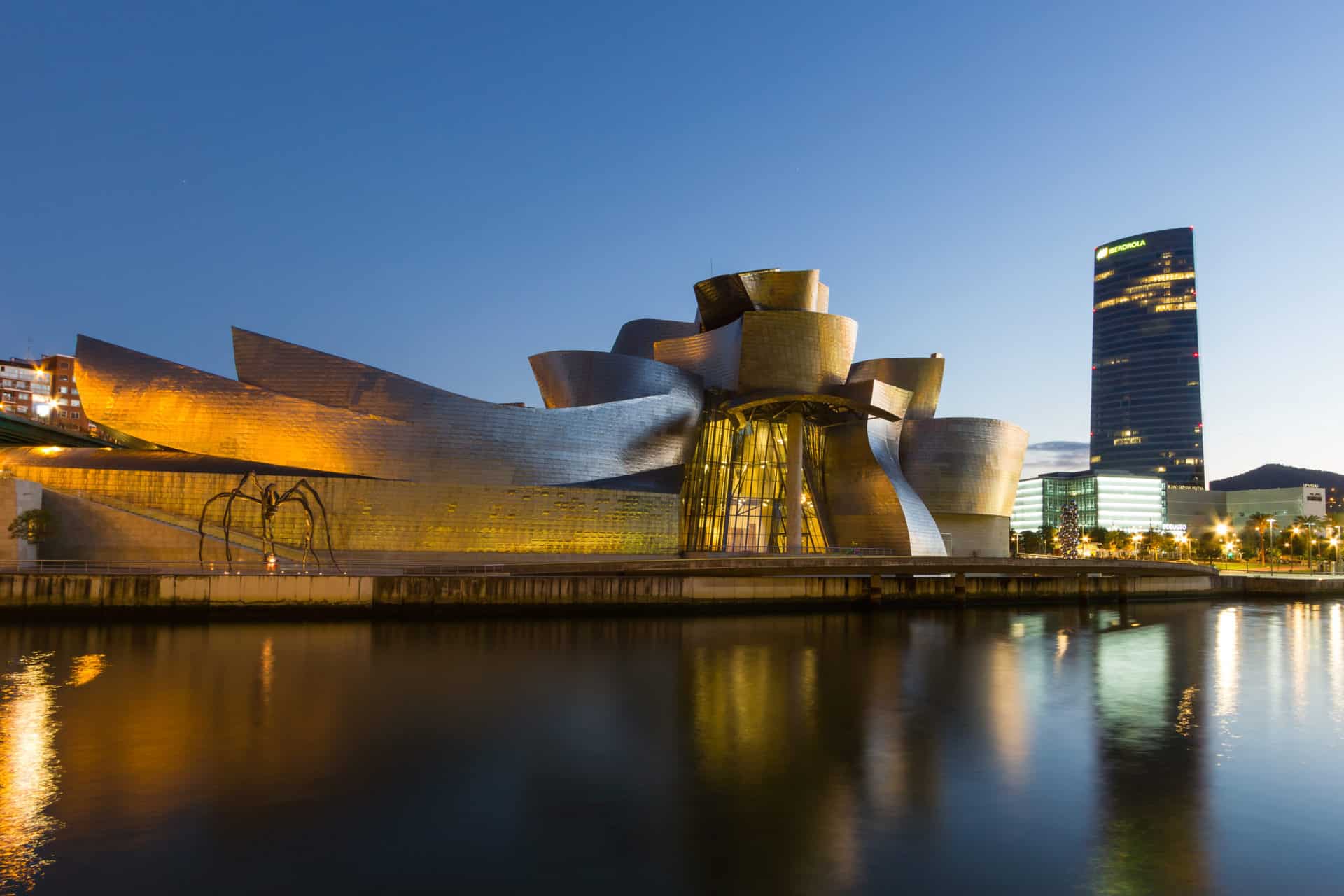 Bilbao is one of the famous cities in Spain, it is the largest city located in the north of the country and it is surrounded by a small mountain range with an average height of 400 meters. In the vicinity of the city of Bilbao, there are rural areas and beaches to relax in the summer 14 km away from the city.

Bilbao includes the famous Guggenheim Museum, which is one of several museums bearing the same name around the world, and this is an advantage in the city, as it combines beaches, shopping, and art.

The city of Bilbao was founded in the 14th century by Diego Lopez V and it was famous as the most important commercial center of the country at that period. In the 19th century, Bilbao became one of the most important industrial centers in Spain after Barcelona, and now it is a center for many services and tourism.

Things to do in Bilbao

Tourism in Bilbao City began to be popular with the opening of the Guggenheim Museum in 1997 and with its opening the number of tourists visiting the city increased. There are many different hotels located in the city, also restaurants that serve famous Spanish dishes and also many gift shops that are spread all over the city.

Bilbao is famous for being one of the cities that have undergone a major and civilized change in the buildings and you can see that in many of the buildings in the city.

In the city, you will find about 17 bridges extending over the banks of the river inside the city, there are also 18 public gardens and parks like Dona Casilida Park and beside all these are the museums that are widely spread within the city and they reached 12 museums that cover many fields like arts, sports, and science.

Now we will get to know all about Bilbao attractions and things you can do in this beautiful city in the coming part, so let us start our exciting journey.

Guggenheim Museum is the most famous attraction in Bilbao, the building was built in the 20th century between the year 1993 and 1997 by the architect Frank Gehry and it was a lovely work of art.

When you enter the building which is located 24000 square meters, you will see paintings displayed along the walls along 3 level staircases. You will also see large windows that allow the lights in and you can see the beautiful art inside 20 galleries exhibits.

Inside the exhibitions, there are artworks by Mark Rothko, Willem de Kooning, Francesco Clemente, Jim Dine, and more artists. The most famous thing here is the 9-meter tall spider sculpture and it is called Mama y Louise Bourgeois and a dog full of flowers blossoms by Jeff Knoos.

In the north side of the old town, you will find the main fairway of this part of Bilbao near there you can visit many other attractions like Teatro Arriaga and it is a Neo-Baroque theatre and it was built in 1890 ad there you can enjoy a lovely night seeing music concerts, dance and opera performances.

Also in the Old Town you will see another attraction which is the church St. Nicolas, it has a beautiful Baroque façade and well-designed interior and it was built in the 14th century.

The Bridges of Bilbao

Bilbao is famous for the bridges located in it, one of these bridges is the La Salve Bridge which gives you a fantastic view of Bilbao and it is located next to the Guggenheim Museum. The bridge was designed by French artist Daniel Buren and it was built in the honor of Guggenheim’s 10th anniversary.

There is also Vizcaya Bridge that is located in the north part of the city, it is considered a UNESCO World Heritage Site, and it was built in 1893. When you see the bridge you will find out that it was the first bridge to use a combination of steel cables and iron.

Another bridge you can see in the city is Zubizuri Bridge that provides access to an area where people like to walk. The bridge features a glass deck and it is one of the city icons.

Cathedral de Santiago is one of the most beautiful tourist attractions in Bilbao city, the cathedral is located in an old town, and it is dated back to the 15th century.

When you enter the cathedral you will see the lovely interior design with 3 naves and the main one is 22 meters in height. Also, the interior design is full of artistic highlights and there is a cloister that features beautiful Gothic details.

Besides that, you will see the Italian and French paintings from the 16th to 19th centuries and all these collections are related to famous artists through the centuries.

Bizkaia Archaeological Museum was opened in 2008, it is located in the old town and the museum gives the tourists the chance to discover the ancient history and know more about it.

The museum shows you the evolution of Basque culture from the prehistoric era till now, the exhibits there display archaeological pieces like pottery, ceramics, and other things. There are other exhibits also that display the remains of prehistoric animals.

Dona Casilda Park is the perfect place for relaxation with your family and friends, it is full of leafy palm trees and lovely colorful flowers and it is landscaped in the Romantic style and surrounded by neoclassical statues and fountains.

When you are at the park you will find pathways for you to walk on it and benches for you to sit on and enjoy the green spaces surrounding you. There is also a lake full of dukes and a place for rowing boats and other things you can see there are botanical gardens and outdoor theatre.

It is a neoclassical square located in the old town and it was built in the 19th century. Plaza Nueva is surrounded by a beautifully designed building that includes restaurants and cafes with outdoor seating.

Basilica de Begona is located on Begona Hill above the old city, and the construction of the church dates back to the 16th century, and the easiest way to get here is by taking the elevator from behind the Church of San Nicholas.

The church was built in the 16th century, and it is home to an important pilgrimage church. The cathedral includes an image of the Virgin of Begona and an amazing painting of The Pilgrimage of Begona. You can enjoy and take lovely pictures in this magnificent place.

Ribera Market is a great place to visit and experience the daily life of people in Bilbao. This market was built in 1929, it is located in the heart of the old town.

This market is considered the largest indoor market in Europe with an area of 10,000 square meters, and the building is characterized by eclectic architecture. This market is the best place to find high-quality Basque, fresh vegetables, and fruits.

Arriaga Theater is located in Arriaga square, It is one of the distinguished theaters with wonderful classical architectural views. It was designed in the same way as the Opera Theater in Paris. The theater was the first theater to use electric lights in Europe. The Arriaga Theater offers many artistic performances and shows every day on its stage many opera and ballet performances and it is a great place for art and opera lovers.

The building was built on 53000 square and it attracts many tourists and even locals to see many performances there like ballet and opera ones. The hall in it is considered the largest stage in Spain and the second largest one in Europe.

The Artxanda Funicular is a cable car that was opened in 1915, it takes you in 3 minutes through the hillside of the Arangoiti neighborhood till you reach the top of Mount Artxanda. When you reach the top you will see a beautiful view of Bilbao city and also you can have a great walk there and watch the sunset.

Alaska: Top 11 Magnificent Things to Do and See

10 Fantastic Things to do in Munich for a Perfect Holiday