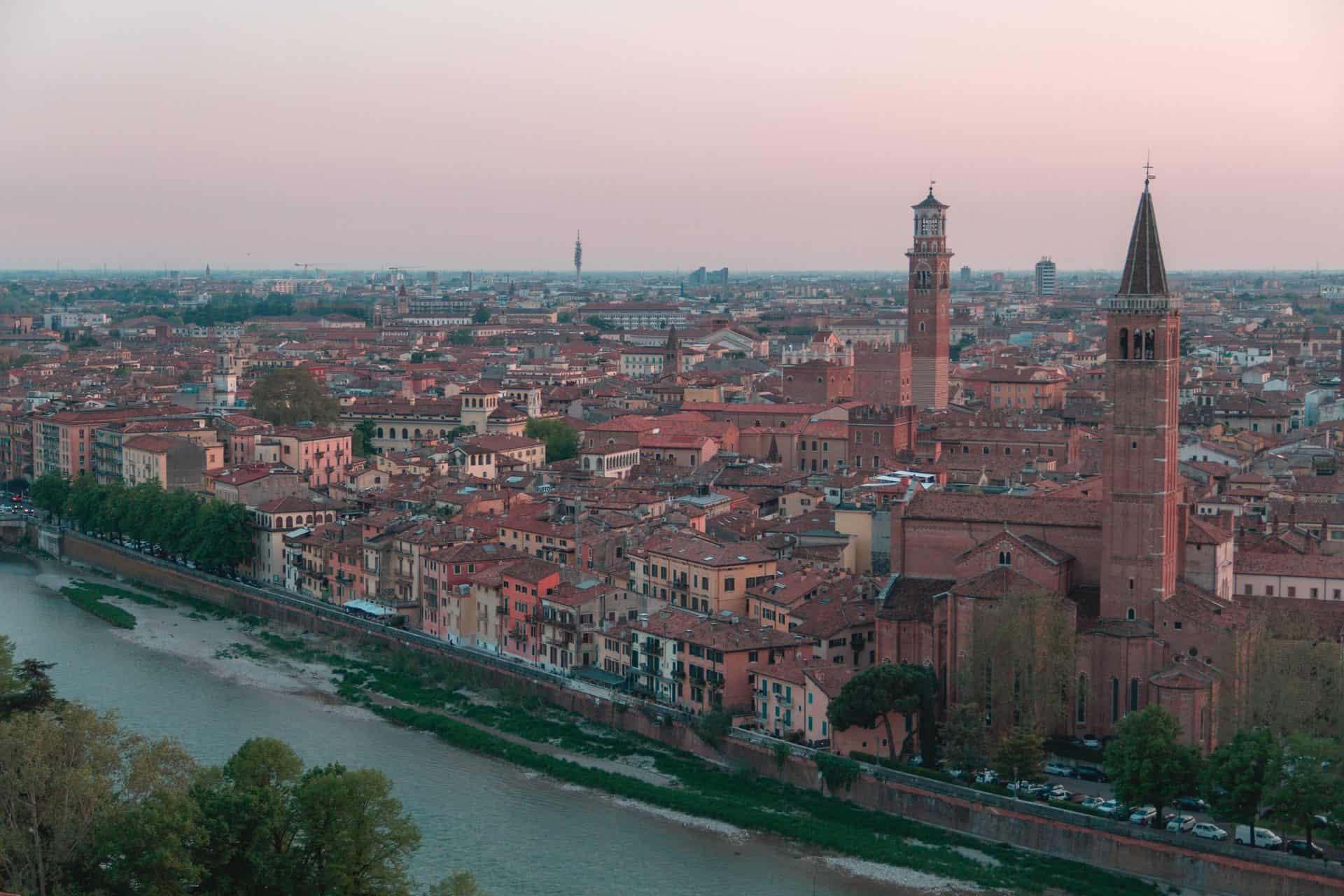 Located in Northern Italy’s Veneto region, the previously Roman city of Verona is now a UNESCO World Heritage Site for its extreme significance across centuries whether geographically, historically, or culturally.

Hugging the banks of the Adige River, Verona was established as a Roman Settlement in 89 BC, and thanks to its importance during Roman times, the city earned its nickname ‘Piccola Roma’ which means Little Rome. However, that’s not all that gave this Italian gem, its worldwide fame, most people know Verona as the city of Shakespeare’s star-crossed lovers, Romeo and Juliet.

Aside from its cultural and historical significance, Verona has plenty to offer as a world-class tourist destination and the perfect Italian getaway spot.

Best things to do & see in Verona, Italy

The sights to see, places to visit, experiences to enjoy in this ethereal Italian city are too many to count. Therefore, you can easily get overwhelmed by its Shakespearean beauty if you don’t plan your trip well and thus end up missing out on some of the best attractions Italy’s Verona has to offer. So let us help you out by taking you on a virtual tour of Verona’s best attractions…

Castelvecchio is a square-shaped fort that dates back to the middle ages and is located right on the banks of the River Adige. At the time of its establishment, Castelvecchio was the most important and most powerful military construction in the area.

Extended out from the fort is the Castelvecchio bridge (Ponte Scaligero) which was the longest bridge of its kind in the world at the time when it was built.

Although built for practical purpose and military use, Castelvecchio fort and bridge, like most of Verona’s old historic buildings from this era, were made from red brick which helped them stand out among the city’s beautiful natural landscape.

This middle age castle is now the home of the Castelvecchio Museum and gallery which depict the history of the castle through a collection of medieval artifacts, factual displays, and an impressive collection of paintings by Pisanello, Giovanni Bellini, Veronese, and Tiepolo.

The Basilica of Saint Anastasia is the city’s largest church and is named after Saint Anastasia who was a martyr that lived in the 4th century AD. This gorgeous basilica was where most of Verona’s ruling families usually went to worship.

Today, the Basilica of Saint Anastasia is one of the city’s most famous and most visited attractions because aside from its historical significance, this centuries-old church is visually astonishing. Walking inside the Basilica of Saint Anastasia, you will see the church’s beautifully decorated vaulted ceiling with ornate side chapels, the colorful tiles on the floor, and 15th-century artist Pisanello’s famous fresco just above the entrance to the Pellegrini chapel.

Whether you are a romantic or not, chances are you will probably be at least intrigued to visit Juliet’s House, Casa di Giulietta and see firsthand the famous and iconic landmark that is Juliet’s Balcony.

The balcony overlooks a small courtyard where a bronze statue of Juliet stands. The Juliet statue which stands today dates back to the year 2004, however, this one is replacing the original statue from 1969 which stands now in the museum’s atrium.

The beautiful setting of Juliet’s house makes the perfect location for a romantic photoshoot with your loved ones or even a reenactment of one of Romeo and Juliet’s famous balcony scenes.

To complete your Shakespearean Literature adventure, you ought to pay a visit to San Francesco al Corso Monastery where Juliet’s empty tomb where she was laid to rest after ingesting the poison is located.

This old monastery has been now transformed into the Museum of Frescoes G.B. Cavalcaselle which houses frescos from Medieval Veronese buildings and 19th-century sculptures.

You can’t round out this Shakespeare tour without paying a visit to the one and only Casa di Romeo, or Romeo’s house. A short walking distance from Juliet’s house is all that stands between the two star-crossed lovers’ residences.

Although the house is not currently open for visitors, just passing by it, and taking a picture or two of the romantic and ethereal entrance as well as the Shakespearean inscription on the house’s facade is enough for you to say that you have officially completed your tour around Romeo & Juliet’s Verona.

Piazza Delle Erbe or Square if Herbs is one of the city’s most lively piazzas. The diamond-shaped Piazza Delle Erbe is located in the heart of Verona’s historic centre, it holds great historic significance as during the Roman Empire, it would have been the location of the main forum of the settlement.

Now, Piazza Delle Erbe is surrounded by multiple important buildings such as the Torre de Lamberti, the Casa de Giudici (Judes’ Hall), as well as the Mazzanti houses.

The masterpiece of the Piazza Delle Erbe is, however, its fountain. This gorgeous historic monument dates back to 1368 when it was built by Cansignorio Della Scala with a Roman statue called Madonna Verona, dating back to 380 AD.

The most iconic and oldest monument in all of Verona is without a doubt the ancient Roman Arena or Arena di Verona.

This architecturally gorgeous Roman Amphitheatre was built in the 1st century A.D. around the end of the Augustus empire and the beginning of the Claudius empire.

The astonishing amphitheater that is the Arena di Verona is one of Italy’s largest and oldest amphitheaters. Thanks to its elliptical shape, it offers some of the world’s best acoustics which is why the biggest names in the music industry, as well as opera, have hosted some of the most unforgettable live performances there over the past few decades. So try your hardest to catch a live show while you are there, it promises to be a once-in-a-lifetime experience.

Verona’s most decorative and gorgeously-detailed religious building is the Verona Cathedral. Featuring a mix of romanesque, gothic, and renaissance styles, the Verona Cathedral or Complesso Della Cattedrale Duomo is truly one of the most beautiful churches in the city.

Dating back to 1187, Verona Cathedral is one of the oldest religious buildings in the city. Surrounding the cathedral is a complex of buildings that include San Giovanni in Fonte, Santa Elena, and the Canon’s Cloister.

Just 40 minutes away from Verona is Italy’s largest lake; Lake Garda or Lago di Garda. Fringed by villages, mountains, vineyards, and citrus groves, Lake Garda is one of the most beautiful and most suited spots to relax and enjoy a picnic outdoors in probably all of Italy.

On Lake Garda and quite close to Verona is the town of Sirmione which contains one of Italy’s most well-preserved castles; the 13th-century fortress built by the Scaliger family, Castello Scaligero.

Along the shore of Lake Garda, you can find lots of beautiful beaches, picturesque alleys, and several cafes and restaurants so you can unwind and relax a bit in some cozy spot while overlooking the breathtaking beauty of Italy’s largest lake, Lake Garda.

When is the best time to visit Verona, Italy?

The best time of the year to visit Verona is during the month between late May and early October, it is when the weather is in its best condition, and the Verona Arena Opera house hosts the best performances.

However, if you are looking for a less crowded scene, aim to visit Verona during the spring and fall seasons.

Whenever you do decide to go, one thing guaranteed is that you will, indeed, have the time of your life in the gorgeous Italian city of Verona.

If you feel like discovering more of Italy’s gorgeous beauty, visit this link to know more about Italy’s hottest spots.

Travel Superstitions: 17 Mesmerizing Spots Around the World that You Should Visit

Bari, Have fun on the Other Side of the Adriatic