What to do in Berlin for an Enjoyable Vacation 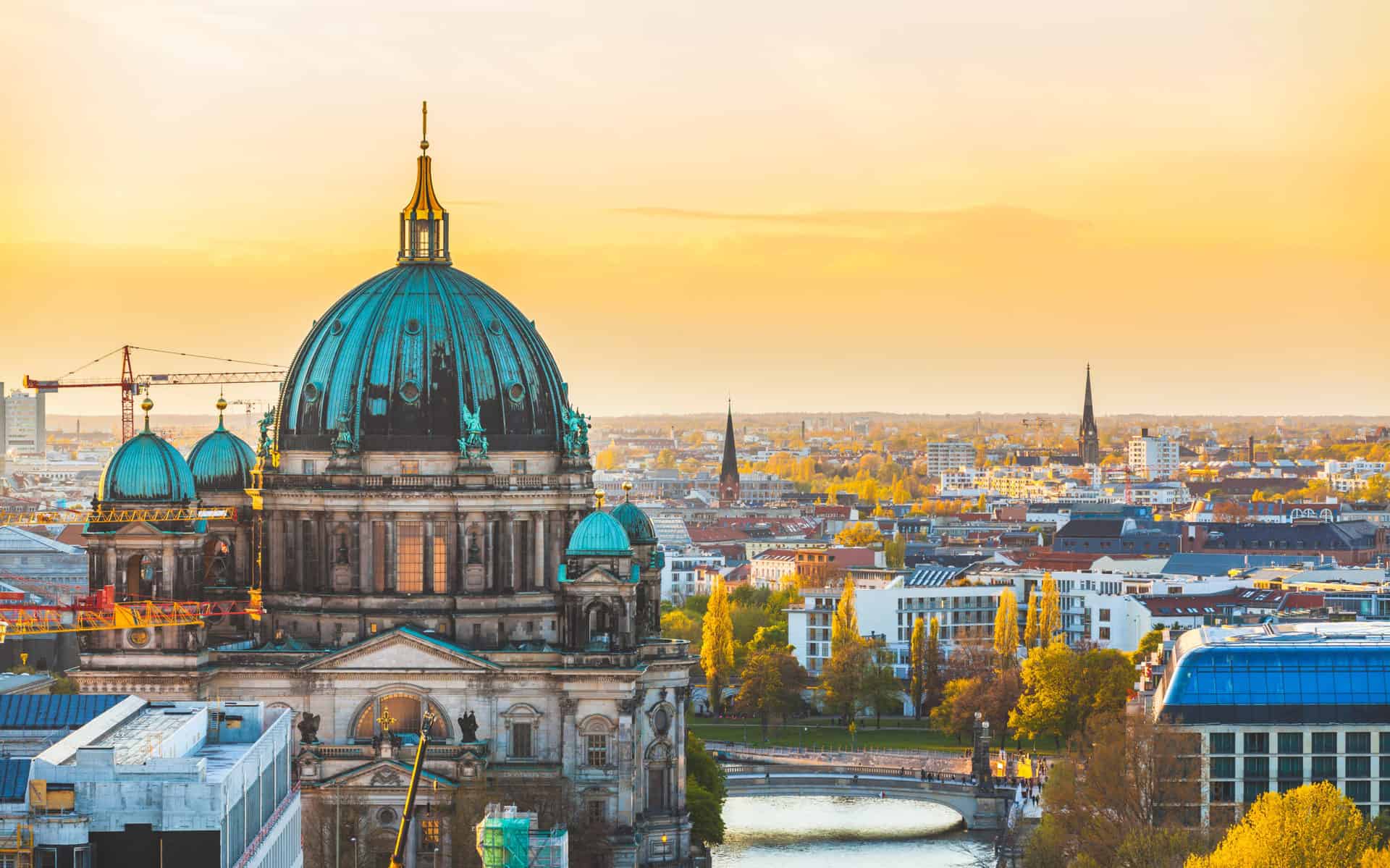 Berlin is located in northeastern Germany and is the capital of the country. It is the second-largest city in the European Union and it is 180 km south of the Baltic Sea. Berlin was in the past a commercial and geographical hub between East and West.

Berlin is the largest industrial city in Germany, it is also the most important major center for trade and technology and it contains the headquarters of many companies in many fields.

Among the most important products that the city manufactures are textiles, metals, clothes, and machinery, as well as foodstuffs, sweets, and cigarettes.

During the 18th century, Berlin expanded in many directions as Frederick II built many buildings and enhanced its infrastructure and economic growth. In 1949, the German Democratic Republic was established, East Berlin became its capital, and in 1961 a wall was built around the city to prevent anyone from moving to any other German city.

In 1989, the Berlin Wall collapsed, celebrations took place in Berlin and other cities, and Germany was unified in 1990, and since that date, Berlin became its capital.

Berlin is one of the most famous tourist cities in the world, tourists come to it to enjoy its tourist attractions and archeological sites. The city includes many theaters, museums, and ancient archeological sites that you will love to visit and discover.

Berlin has a humid continental climate, with cold winters and warm summers. The temperature in winter ranges between -1 degrees and 18 degrees in the summer.

Things to do in Berlin

Berlin is one of the most important cultural and tourist cities in Europe and the world, as it has many historical and archeological sites, and the most important site there is the Berlin Wall. Also, there are many high-end shopping places in the city.

And in this article, we will get to know the most important tourist attractions in Berlin and the famous attractions of this beautiful city.

The Brandenburg Gate is considered one of the famous tourist attractions in Berlin, it was once known as the place that divided the nation but now it is known as a symbol of unity and peace. The gate was built by King Frederick Wilhelm II in 1788 and its design was made like the Propylaea in Athens’ Acropolis.

Also, the gate was famous for being the background of US president Ronald Regan’s 1987 plea to Soviet leader Mikhail Gorbachev to tear down the wall. The gate is 26 meters tall, it is made of sandstone and it is located in the Mitte district’s Pariser Platz and it will be beautiful to visit it at night and take lovely pictures.

Another top attraction in the city of Berlin that you would love to visit is to know more about the history of this beautiful city and it was built to mark the 750th anniversary of Berlin in 1987. The museum consists of many exhibitions that show artifacts from the founding of the country till the fall of the Berlin Wall.

Also when you visit the museum you will find things related to fashion, religion, art, and photography. Military collections are included like weapons, armor, and uniforms. There is also a cinema and a library open for the public.

The Charlottenburg Palace and Park are considered the oldest and largest Prussian estate in Berlin, it was built in the 17th century and was for many years the residence of the German royal family. When you visit the Palace you will be inspired by its 5o meters high dome, outstanding decorations in its rooms, and the beautiful garden surrounding the palace.

Also, you can see the New Wing that was built in 1746, where the Prussian Kings lived and included beautiful apartments and Banqueting Halls. There is the State Dining Room and the Golden gallery that you can see inside the palace.

On your tour there, you will be able to see the Old Palace that includes rooms containing crown jewels and other royal items. Palace Park was built in 1697, and it’s a beautiful place where you can spend a good time.

Berlin’s Television Tower is 368 meters tall, it celebrated its 50th anniversary in 2020 and it was opened in 1970 and it is considered as the third-tallest building in Europe. The tower attracts many tourists from all over the world to see the wonderful view of Berlin from the top. Also, you can have a lovely meal at the 207-meter high restaurant located in the tower.

The Reichstag was built in 1894, it was the home palace for the German Empire Imperial Diet until it was burned in 1933 and it was not used again until Germany was united. It was reconstructed for about 10 years until it became the home of the German Parliament in 1999.

One of the things that you will find reconstructed in the place is the dome, which is made of glass and from there you can see a lovely view of the city and especially at night from the restaurant.

The German Museum of Technology

The German Museum of Technology was built in 1983 to celebrate the huge industrial and technological prowess that took place in Germany. When you visit the museum you will find many things to do for yourself or for children including taking in displays related to the Industrial Revolution.

When you are inside the museum you will see many aircraft and vehicles, including several preserved steam engines from 1843. Also, you can have a ride on a vintage 1930 train and there is also a restaurant so you can enjoy a meal there.

The Museum Island is located between the River Spree and the Kupfergraben in a 400-meter long canal, it is considered a UNESCO World Heritage Site and you will find many important museums in this place. The island includes the Old Museum, which was built in 1830 and it contains the Crown Jewels and royal treasures.

There is also the New Museum that was destroyed in World War II, it was rebuilt and opened in 2009, it includes collections from the Egyptian Museum and collections of Classical Antiquities. The Old National Gallery was opened in 1876 and it displays paintings from the 19th century.

The Bode Museum includes a lot of collections from the Byzantine era, as well as a large sculpture collection passing from the medieval age to the 17th century. The most famous one is the Pergamon which is well-known for its Islamic Art.

The Berlin Wall was built in 1961, it was founded when East Germany sealed off half of the city to prevent citizens to go to West Germany but in 1989 the wall was down. It is 4 meters high and extends 155 kilometers and when you visit the wall you will see small stretches of graffiti covering the wall, including a 1.4 km stretch preserved as a part of the Berlin Wall Memorial.

Also, you can visit the Marienfelde Refugee Center Museum, which includes exhibits that are related to one and a half million people who passed through Berlin as refugees.

The place is considered as one of the top attractions in Berlin, it is one of the largest squares in the city and it is surrounded by three historic buildings which are the French Cathedral, the German Cathedral, and the Konzerthaus. It also hosts many concerts and events throughout the year in the Konzerthaus Theatre especially in summer and in winter the square becomes a Christmas Market.

The Berlin Cathedral is located on Museum Island, it is one of the magnificent buildings in Berlin with its 75-meter high dome and it was built in the New Baroque style. The cathedral is divided into three sections which are Memorial Church, Nuptial Church, and the Parish Church.

The cathedral was damaged by war and was returned as before, when you visit the place you will see the Imperial Staircase decorated with bronze cornices and 13 paintings by the painter Albert Hertel in 1905.

It is the oldest zoo in Germany, it is one of the famous top attractions in Berlin and it was built in 1944. The Berlin Zoological Gardens includes about 20000 animals from wolves, zebras, pandas to giraffes, and penguins.

Also, it’s a place where you can find Aquarium Berlin which includes about 9000 swimming species and 250 tanks that contain insects, sharks, jellyfish, and much more.

The Best 8 Honeymoon Destinations You Could Think Of