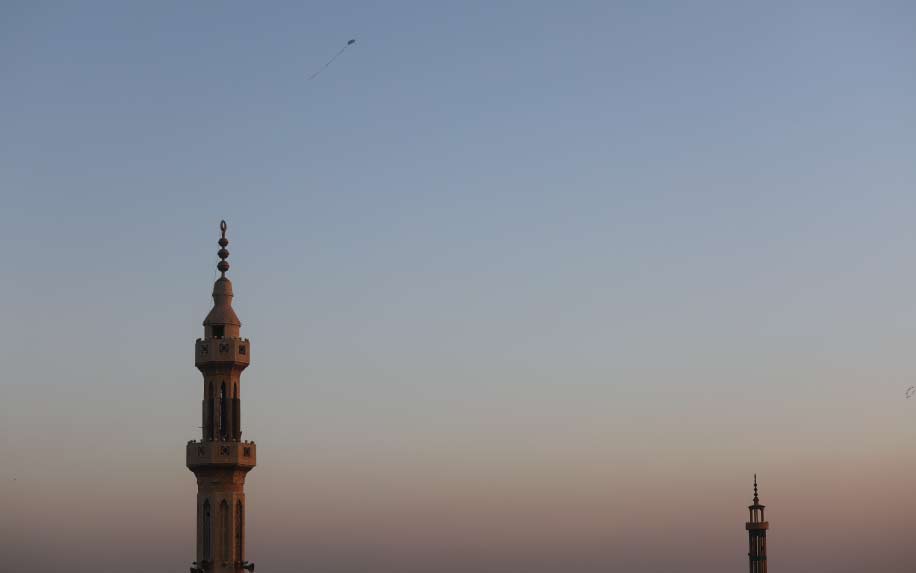 The Mosque of Amr ibn al-Aas in Damietta is the second mosque built in Egypt and is one of the oldest mosques in Damietta. It was established c. 21 AH/642 AD. It is also known as Al-Fateh Mosque, in reference to the Arab conquest of Egypt. The mosque was built by Al-Miqdad bin Al-Aswad during the reign of Amr bin al-Aas.

The mosque was built in the style of the Amr ibn al-Aas Mosque in Fustat and has Kufic writings with verses of the Quran on its walls and Roman columns supporting its roof.

The mosque features a central dome surrounded by four iwans. The main entrance to the mosque lies on the western side next to a square minaret hall that was destroyed in ancient times as a result of an earthquake.

The mosque has an open courtyard surrounded by several iwans, the largest of which is the qibla iwan. It contains several columns made of marble from the Roman era.

The Mosque of Amr Ibn Al-Aas was restored and renovated several times throughout its history, such as in 1106 AD during the Fatimid era when it was expanded. During the Mamluk era, Damietta was destroyed, but thankfully, the mosque was kept safe.

After extensive renovations in the modern era, the mosque was reopened to worshipers on 8 May 2009, coinciding with the National Day of Damietta, which corresponds to the victory of the people of Damietta against the Crusade led by Louis IX.

The Crusades and Louis IX

This mosque was actually converted into a church several times throughout its history. When John of Brienne seized Damietta in 1219 AD in the Fifth Crusade, he turned the mosque into a church, and when the Egyptians finally took the town back and the Crusaders left Damietta in 1221 AD, it was converted back into a mosque.

In 1249 AD, Louis IX, King of France, entered Damietta, after which he transformed the mosque into a cathedral where he organized religious ceremonies, including the baptism of his son, Jean.

Located in the North of Egypt, in the Delta region, Damietta is divided by the River Nile into two sections. It also overlooks the Mediterranean to the north and Manzala Lake to the east. The fact that it’s surrounded by so many bodies of water has led to fishing becoming the predominant hobby among many of the city’s residents.

Damietta is also famous for several industries, including furniture, leathers, shipbuilding, textiles, and sweets, as well as its dairy products and rice mills.

Damietta and the Seventh Crusade

The Crusaders returned once again despite their continuous defeats against the Egyptians and they invaded Egypt through Damietta, reaching the coast of Damietta on 4 June 1249 AD.

The people of Damietta defeated the French once again in Mansoura and the King of France Louis XI  was imprisoned in the house of Ibn Luqman in Mansoura until a ransom of 400 thousand pounds was paid in exchange for his life and the French troops evacuated the city.

What to do in Damietta

There are many monuments to visit in Damietta, including the Byzantine church or the Greek Orthodox Church, dating back to the Byzantine era. It was renovated in 1845 and then restored in 1945 and 1950.

The church displays many ancient artefacts, including a silver-coated Greek Bible, ornamented with precious stones, as well as several crowns, incense-burners, as well as a grand ancient wooden icon, and an elaborate wooden pulpit.

Another notable monument is the Mosque of Al-Muaini, which was built by the merchant Muhammed al-Din Al-Muaini in 1310 AD during the reign of the Mamluk ruler Al Nasser Qalawun. The mosque is built in the Mamluk style, with four Iwans, and the ceilings are decorated with Mamluk ornaments.

A great place to visit in Damietta is Ras El Bar, a resort city overlooking the Mediterranean and the Nile. It is a favoured vacation spot among Egyptians during the summer. There are many small chalets and villas there for rent where families can enjoy their time together.

The area of Lessan is also worth a visit if you’re in Damietta. It is where the Nile flows into the Mediterranean, which makes it the perfect location for a walk while watching the sunset or fishing.

The city of Ezbet El-Borg is on the bank of the Nile facing Ras El Bar and it is one of the largest ports for yachts in Egypt.

Another interesting place to visit is the Fort of Oraby which was originally built by the French expedition and was later used by Egyptian patriots during the Oraby Revolution (1879-1882).

Tell El-Bershaya in Damietta is considered one of the most important archaeological hills in the area. It was an ancient Egyptian cemetery where 1100 antiquities were discovered and will be on display in the Grand Egyptian Museum in Cairo, which will open very soon.

One of Damietta’s most famous mosques is The Bahr Mosque, located on the eastern bank of the Nile. It was built on an area of ​​1200 m² in Andalusian style and was first renovated in 1009 during the Ottoman Empire, and was rebuilt once again in 1967. Its walls are ornamented with Islamic inscriptions and it has five domes, two minarets, and a cultural and religious library.

Finally, you can head to Tell al-Deir; a huge Necropolis used in ancient Egypt, as well as the Greek, Roman, and Byzantine periods. The coffins discovered in the area were made of fine limestone, with the faces of the deceased drawn on them. These coffins have also been transferred to the Great Egyptian Museum for display.

Although Damietta is one of the lesser-known Governorates in Egypt, it is definitely worth a visit, if not for its abundance of monuments and antiquities from different periods, then for its amazing beaches, overlooking both the Nile and the Mediterranean and the fact that it will not be as crowded as many other cities across Egypt, leaving you to enjoy your trip no matter the season.

For more exciting adventures, check out our guide to historical sites in Cairo.

The Ancient City of Marsa Matrouh

Outlander: Filming Locations of the Popular TV Series in Scotland