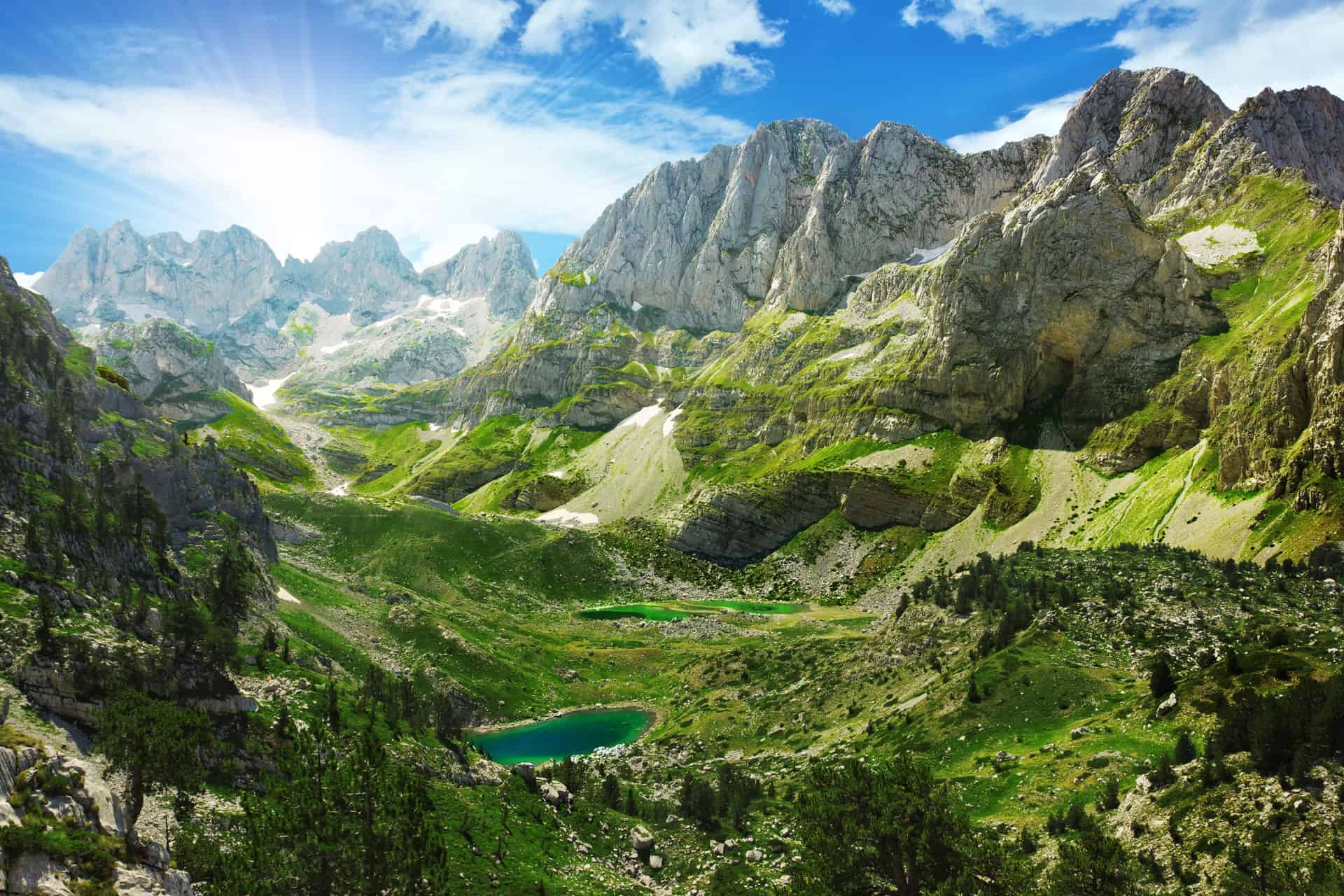 Albania is a European country of unique nature. It has a strategic geographic location in Southeastern Europe with Montenegro to the northwest, Kosovo to the northeast, North Macedonia to the east, and Greece to the south. Albania has a cosmopolitan culture as well as nature. It lies on the Mediterranean Sea coastline where there is a Mediterranean climate, whereas the climate tends to be colder near the Central Mountain Range.

Furthermore, Due to its history of occupation from different cultures such as the Greeks, Ottomans, and finally communists, its cosmopolitan nature prevails in its culture. In Albania, people from different religions and cultural backgrounds live harmoniously together. It is worth mentioning that Albania is the homeland of the Nobel Peace Prize winner, Saint Mother Teresa, who is an icon of harmony and amity.

1)   For its Historical Treasures

There are many historical landmarks in Albania due to its long history of occupation from different civilizations. Many of these sites are also announced as UNESCO World Heritage Sites.

Your tour in the museum might take up to 3 hours due to its large collection and space. The visit to the museum is not expensive, it costs about 500 lek (local currency in Albania) per person and there are discounts offered to groups of more than 12 persons. Also, entry to the museum is free to all visitors during some national days of Albania.

It is one of the important archaeological museums in Tirana, Albania. It is affiliated with the Academy of sciences in Albania. Thus, it includes the research findings of the archaeological discoveries in the territory that date back to the prehistoric periods up to the Ottoman Empire rule of Albania. The museum also includes a library that has a wide collection of more than 7000 volumes. It is located on the east of Mother Teresa Square, near Tirana’s university.

It is a museum of diverse biological collections from Tirana natural treasures that includes a wide collection of animal and plant species. The rich collection is due to the talented, dedicated Albanian researchers’ hard work to enrich it. One of those researchers is Sabiha Kasimati, who was murdered in 1951 by the communist regime. The museum was called after her in 2018 to honour her memory.

It is located in the ancient city of Apollonia in southwestern Albania. In the park, visitors enjoy the combination of beautiful nature and highly preserved ruins and monuments that date back to the 6th century BC. The ruins of Apollonia were discovered at the beginning of the 19th century. It has monuments representing the Greek and Roman civilizations. It is said that is where emperor Augustus studied philosophy.  The park also has the old Monastery of Saint Mary and a Museum of Archaeology.

Berat is one of the famous archaeological cities in Albania that are worth visiting. It contains architecture that represents different cultures. It was announced as one of the UNESCO World Heritage sites in 2008. Walking in Berat, you will be fascinated by the cosmopolitan architecture, cultural and religious city exterior. It has a castle, churches, mosques and a museum. The city is located only 120 km away from Tirana. You can easily book a bus to take you from Tirana to Berat.

Butrint is an ancient Greek city located near the borders of Greece in Albania. It was declared as a UNESCO World Heritage site in 1992. It was inhabited since prehistoric times and considered both a Greek and Roman colony. Thus, it is an archaeological site that is full of Greek and Roman ruins. Its natural location alongside the Ionian Sea, and being surrounded by lakes and rivers, provides the city with a Mediterranean climate that adds to its attractive historical location. You can reach the city by booking a private car or a bus from the city of Sarandë.

The Gjirokastra city, or “the city of stones”, is another UNESCO World Heritage Site in Albania. It is located on the east side of the Gjerë Mountains. The city is characterized by its stone buildings. There are many landmarks to visit there including the castle of Gjirokastra, the Mosque of Bazaar, and the Museum House of Enver Hoxha.

It is located in northeast Albania, near the city of Shkoder. The castle is built on a hill that is surrounded by two rivers, the Bruna and the Drin rivers. It dates back to the Illyrian period. Inside the castle, there is a museum that illustrates the castle’s history. There is also a citadel that was turned into a mosque during the Ottoman Empire. It is one of the must-see archaeological sites in Shkoder.

The castle of Lezha is another historical castle in Albania that dates back to the Illyrian times. It is located east of Lezha on the top of a hill. It was subjected to several constructions throughout different dynasty periods that end with the Ottoman Empire. In the area of the castle, you can find Illyrian ruins along with that of the Romans, Byzantines, and the Ottoman. The castle offers an amazing top view of the city and the Adriatic Sea.

It is one of the main tourists’ destinations in the city of Krujë. The castle was built between the 5th and 6th centuries. It is surrounded by nine towers, where the highest tower served as a watching tower. In 1982 a museum was established in the castle’s main entrance. The museum has a bookshop, in addition to the memorial items. In the castle, there are also houses and a small mosque. It is worth mentioning that the Krujë castle served as the center for the Skanderbeg’s rebellion against the Ottoman Empire’s invasion.

2)   For its Diverse Nature

Albania is a country blessed with the diversity of its natural landscapes and thus the number of activities you can do and places you can visit. Here are some places to visit and inspiring things to do in the country.

It is a must-see natural river that runs in the middle of two cliffs inside the Albanian Alps. It can be reached by a boat trip from Koman Lake, where you will experience a breathtaking natural scene. The Shala River is often described as the pearl of Albania. It is characterized by its crystal clear blue water. The cliffs surrounding it from both sides add to the unforgettable scenery of beauty, especially for people who enjoy the tranquility of nature.

The Blue Eye in Albania is one of the unique natural phenomena in the country. It is a famous tourist destination because of its exceptional natural scenery. The Blue Eye is characterized by its crystal blue clear water that can be seen even from depth. It is still unclear how deep the Blue Eye is, but the deepest spot divers reached was 50 meters deep. You can also enjoy the beauty of the forest surrounding the Blue Eye that is considered a natural monument.

A phenomenal natural occurrence located near the Village of Theth in the city of Shkodra. The unstoppable water flows amid the beautifully carved rocks provide exceptional scenery. To reach the waterfall, be prepared to enjoy one of the best hiking trips in the country.

You cannot visit a country that lies on the Ionian Sea coastline and not pay a visit to its beaches. One of the most recommended destinations is the Dhraleos beach that is located near the village of Palase at the town of Himara. The beach is characterized by its white sand and crystal clear water. It is a perfect place to do different sea activities.

Moving away from water adventures to the mountains, a trip to the Albanian Alps is an unforgettable journey of natural beauty and adventure in Albania. There are several natural parks in the Albanian Alps in Tethi, Valbona and Kelmendi regions. Through your journey you will encounter several inhabited villages and their water springs, rivers, wild animals, and natural interface. Some activities you might do there include mountain climbing, skiing, and, if weather permits, camping.

Erjan Guxha, a tour guide, and David Hoffman, a blogger, who both travelled around the country of Albania, acquired the habit of saving stranded turtles and bringing them back to their yard in Daias. After some time, the number of turtles reached 116, and they decided to turn their yard into a public place for interested people.

It is one of the most attractive places to children and adults alike. They offer visitors the chance to adopt a turtle where they can come visit their adopted turtle any time provided that the turtles stay on the farm. In the turtle farm visitors are also offered a place to rest and eat enjoying the view. It is a must-see place in Daias, Tirana.

3)   For the Hospitality of its people

Albania is perfectly safe for visitors. Because of its diverse cultural history, its inhabitants accept people from all backgrounds without discrimination. Albanians are also known for their hospitality. They respect their guests as part of their traditions.

As the famous Albanian writer, Ismail Kadaré describes in his book Broken April, “Albanian’s house is the dwelling of God and the guest”.  He also emphasizes the importance of the “guest” notion, saying, “The guest, in an Albanian’s life, represents the supreme ethical category, more important than blood relations. One may pardon the man who spills the blood of one’s father or of one’s son, but never the blood of a guest.”

4)   For its unique Cuisine

As mentioned before, Albania has been under the influence of different civilizations and cultures. Also, because of its geographic location, it served as a trade port in Europe. Its cosmopolitan nature did not stop at its inherited culture and people lifestyle, but it was also reflected in its cuisine.

Albanian cuisine is one of the most delicious and unique in Europe. It creates a mix between the European, Mediterranean, and Ottomans cooking styles. Some famous dishes names are fëgesë, tavë kosi, byrek, speca me gjize, baklava, and trilece. Make sure to try some of them in any available restaurant in Albania.

5)   To spend a Budget-friendly vacation

Albania is your destination if you wish to spend a unique vacation in a European country that has both historical attraction sites and natural beauty. One of the advantages of visiting Albania is that it is a budget-friendly country. The official currency of Albania is called Lek. One Euro is equivalent to around 121 leke. Some places in Albania accept the Euro currency.

How to Get There?

Due to Albania’s strategic location mentioned above, there are several ways to reach the country easily. One way is booking a flight to Tirana’s International Airport. Another available option is by boat which arrives at one of four main ports; Durrës, Vlorë, Shëngjin, or Sarandë. Finally, you can drive to Albania in your own car.

How to Move Around in Albania?

The transportation network in Albania is not huge. However, the available options are perfectly affordable. The best option for public transportation is by bus. Other options include renting a bike, a car, or a motorcycle.

There are a variety of available options in the cities of Albania. The range of prices start from $25 and might reach $150 per night. Below you can find some recommended properties in the major Albanian cities.

14 Top Places To Visit In Spectacular Poland, The Land Of Fields