Al Azhar Park, A Gigantic Gem in the Heart of Old Cairo 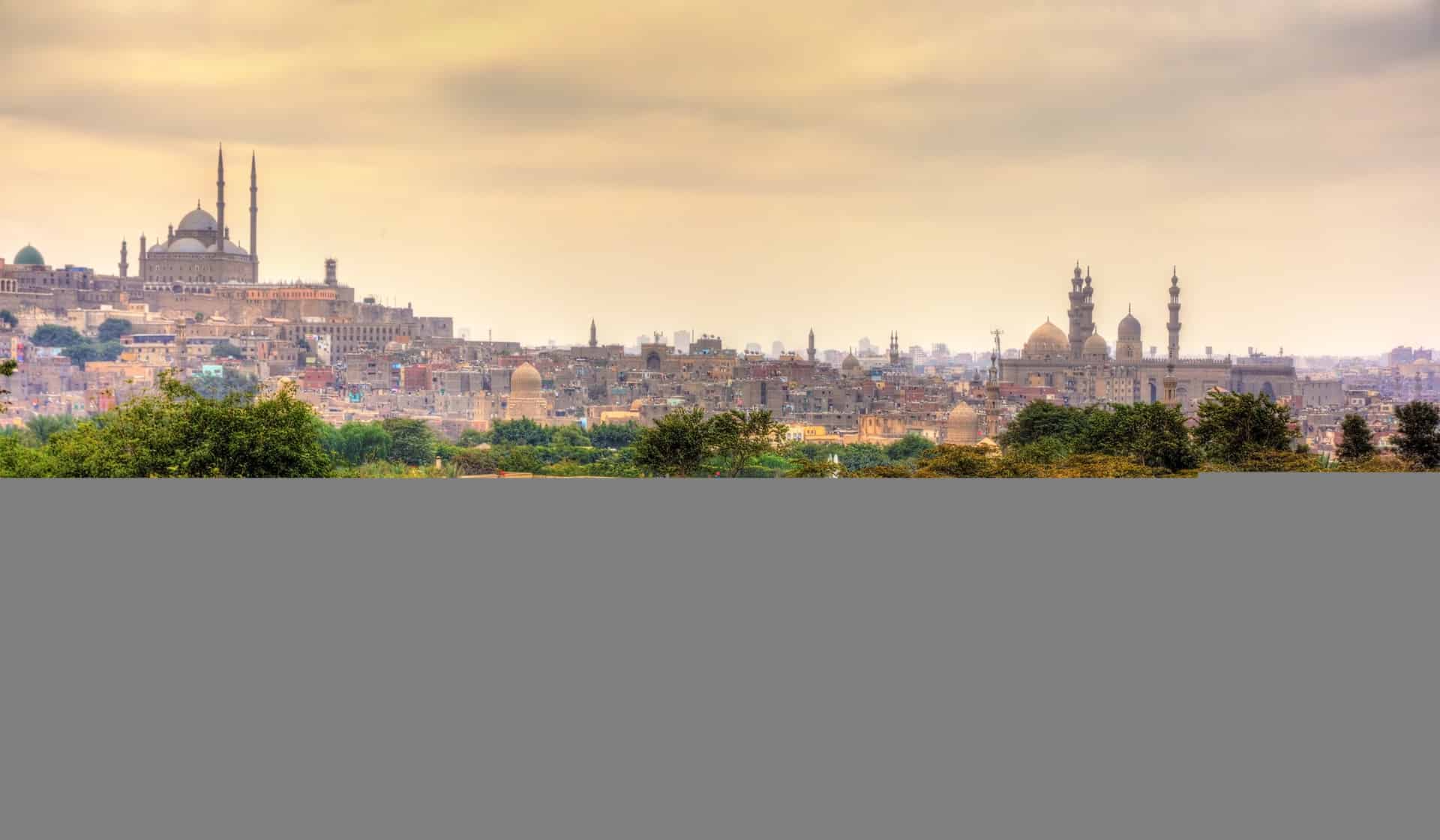 For its important location being Egypt’s capital and the largest of all the provinces in addition to its historical status, Cairo has a great prominence among the cities of the Middle East. From ancient Egyptian moving to Roman, Coptic then Islamic eras, the city has witnessed some of the greatest civilisations around the world whose remains are still standing till the present time.

According to the UNESCO, the area of Old Cairo has the lion’s share of Islamic remnants in the world, which is one of the reasons why Cairo earned the name of “the city of thousand minarets.”

At a time when a significant space in Old Cairo was neglected where poverty and health deterioration were the dominant factors. Opened in 2005 after many years of preparations, a public park under the name of Al Azhar Park was opened in the middle of the grey forgotten old area to become a reanimation to the whole district around it.

It all started around 70 years ago, when Agha Khan IV (49th Imam of the Nizari Islamist and a descendant of the Fatimid Dynasty) decided to donate 30 million dollars to build Al Azhar Park in the heart of the Old Islamic Cairo as a gift to the city that once belonged to his ancestors and was actually built by them.

So, the perfect spot was chosen between the 12th century’s Ayyubid city and the 15th century’s Mameluke City of the Dead. In a space of around 75 acres that was originally loaded with rubbish that has been accumulated for 500 years near El Darrassa, the Historic Cities Support Programme – a part of the Aga Khan Trust for Culture – started to execute the project.

Al Azhar Park and the Restoration of Other Treasures

During the digging process, tons of scrap, waste, and remains were removed to be replaced with salutary soil for around two meters deep, besides the Geotechnical treatment the area has received to make sure everything is suitable and healthy. In fact, this wasn’t the only transformation that occurred in the area.

During the process a whole restoration to the neighborhood of Darb Al-Ahmar (one of Cairo’s most poor areas where the population have suffered from overpopulation, lack of education, and other severe problems with healthcare and sanitation) has taken place: from housing repair to improving health and hygiene facilities in addition to many job opportunities which were offered at the park. So mainly, the project of Al Azhar Park has returned with plenty of benefits to the population around it.

The rehabilitation of Darb Al-Ahmar district wasn’t the only improvement that has happened to the area during the creation of Al Azhar Park.

Another big improvement was made during the excavation when a 15-meters-depth forgotten historical wall that belongs to the Ayyubid era – from the 12th century – was found under the pile of rubbish. That’s when the Ayyubid wall started to get an extensive reformation also during the construction of Al Azhar Park.

The Islamic Classic Style and The Park’s Design

As for the layout, the designers intended to build Al Azhar Park on the classic Islamic style for both design and the choice of gardens as the surroundings of the whole area also go back to different periods of the Islamic era. Hence, the park will bring a fresh Islamic spirit to the whole district.

Gardens, fountains, wide areas, sitting yards, pathways, and different buildings are constructed on various styles of the different Islamic periods including the Fatimid, Persian, Timurid, besides the colourful stonework that’s made in the style of the Mamluke period.

As for the sitting yards, they’re mainly designed on the takhtaboush style (design for the public spaces and ground-floor house halls where a person can receive visitors, takhtaboush were famous in the Ottoman local architecture). Besides the artistic design, Al Azhar Park is also famous for different kinds of plants especially those Egyptian-native ones in addition to what’s known as “bustan-like orchard spaces”.

A Window to the Old Islamic Cairo

Strolling around Al Azhar Park will be pretty much like strolling around a 360-view open museum and helps with that the hilly nature of the surrounding area.

The park is encompassed with some of the most magnificent structures of Old Islamic Cairo and dozens of old minarets. On its west lies the Fatimid City with its historic buildings, ancient mosques, shrines, and madrasas (old Islamic schools) in addition to Darb Al-Ahmar district.

In the southern area both Al Sultan Hassan Mosque, Al Refa’i Mosque and their surroundings are located. The famous Salah El din Citadel, aka Ayyubid Citadel or Cairo Citadel, is also located to the south of the park with a breathtaking view of it with Muhammad Ali’s Mosque, especially at night.

As for the eastern side lies the Mameluke “City of the Dead” aka Cairo Necropolis – a 4 miles-long space of dozens of Islamic cemeteries and shrines where living people live among the dead ones.

Reciprocity of Cultures and Arts

Al Genaina Theater, a semi-open theatre located along the Cairo-Ayyubid Wall on the western edge of Al Azhar Park and can accommodate up to 500 spectators. Opened in Al Azhar Park since 2005, Al Genaina Theater aims to present various musical and theatrical programs throughout the year, which mainly are presented by independent artistic groups and bands from both Egypt and the Arab region.

Not only does it aim to bring different artistic cultures together in one place, but it also attempts to provide a leading and distinctive technical opportunities to help young and rising Arab artists to explore different creative horizons.

The theatre has gained wide fame since its opening as one of the most cultural sites aiming at enriching the culture and artistic reality in Cairo in addition to creating a state of musical mobility through the programs, events, and festivals offered by the theatre to the public at affordable prices.

Al Genaina offers around 60 concerts a year during the summer season which starts from April and ends by November. These concerts are performed by Arab and international bands and artists through monthly programs. On the other hand, it’s important to mention that the main credit in the establishment of this cultural edifice goes to the Cultural and Local Development Fund of the Dutch Embassy in Cairo.

Food with a Historical Taste

Imagine sitting in the core of an open museum enjoying a pleasant meal or a nice drink. The food experience in Al Azhar Park is special as it comes with a taste of history. With an amazing extensive view to the Ayyubid Citadel lies the Hilltop Restaurant at al Azhar Park.

Designed by two Egyptian architects, Rami El-Dahan and Soheir Farid designed the restaurant with a touch of Cairo’s conventional architecture style. The restaurant has a small classical fountain at the centre of it and an elegant shaded space the end with a nice terrace where you can see the Citadel.

Besides the Hilltop Restaurant, there is also the Lakeside Cafe (a Lebanese cuisine) which is designed by Serge Santelli, an award-winning French architect, also with a magnificent view of the Citadel.

If you want to treat yourself with nice ice cream, a light meal or some snacks then Alain Le Nôtr is a perfect choice. For Egyptian food or various daile theme buffets, you can go for Studio Misr.

With the collaboration of the Egyptian Supreme Council of Antiques The Aga Khan Thrust is working on a new project of building a museum to showcase the development of Islamic Cairo’s history through different eras.

The museum will be constructed at the Northern end of Al Azhar Park. It will be built on a 4,000 square meters to display more than 1,000 items to be exhibited from various periods of Cairo’s history and the evolution of it throughout time.

The museum will contain a special laboratory to help recondition important elements from the Cairo Museum of Islamic Art in addition to teaching young workers at the museum how to deal with and preserve such valuable pieces.

In addition to being a huge turning point in the lives of the surrounding districts, the park now attracts millions of visitors every year from families who are looking to spend some quality time together and get some fresh air to those who are interested in discovering the secrets of history, culture, and art.

With all of this in one place, Al Azhar Park can be considered as a bridge that connects different cultures and interests in addition to bringing the past to the present.

Have you ever visited the Al Azhar Park in Cairo Egypt? Let us know your experience in the comments below.

The Implication of the Coursing Nile River through Egypt

Legendary Castles in Ireland: The Truth Behind the Irish Urban Legends