Close X
Home/Things to do and see in Asia/15 Places to Visit in Ajman, UAE

15 Places to Visit in Ajman, UAE 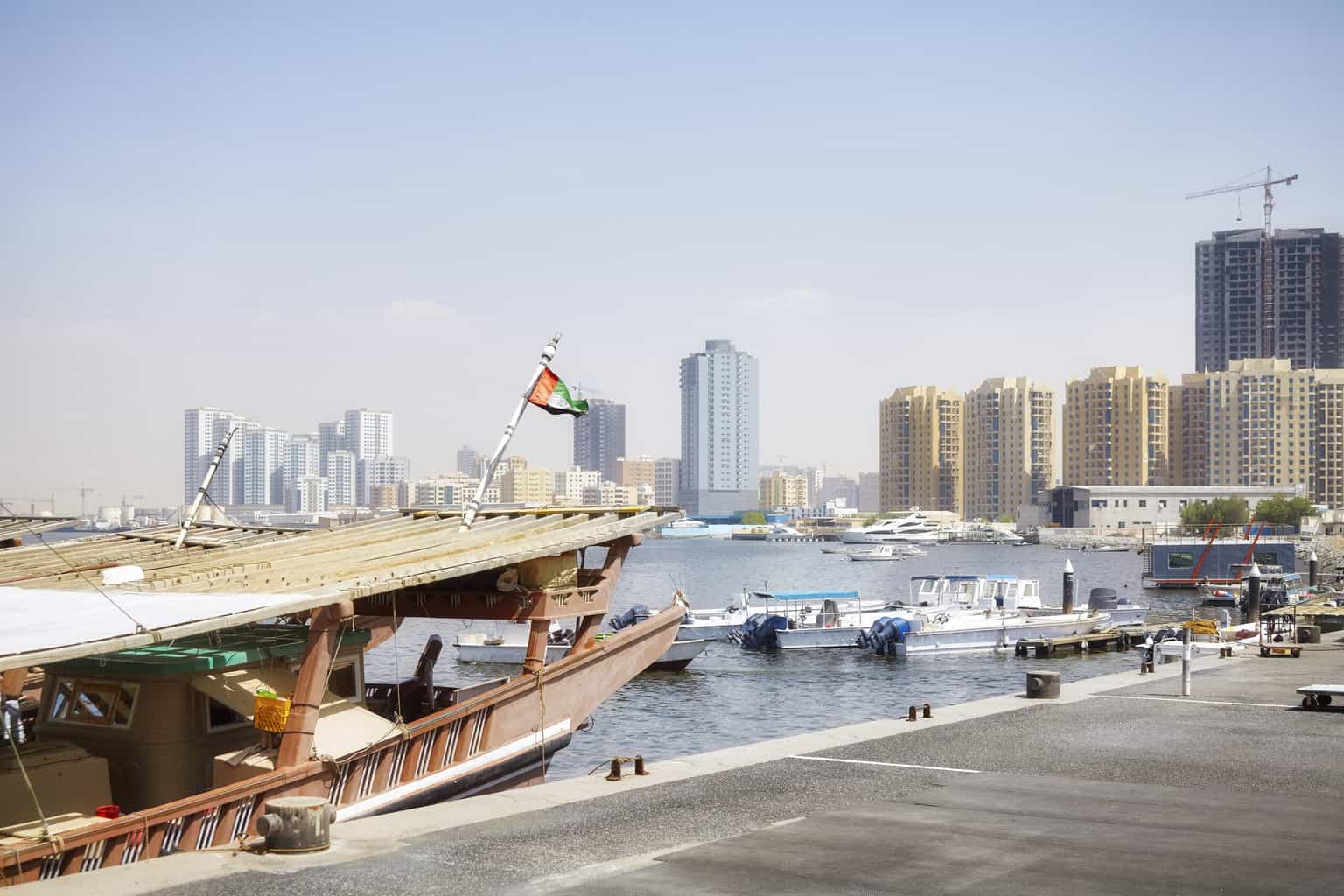 Ajman is the smallest of the seven emirates and covers an area of 260 km2. It is on the coast of the Arabian Gulf, between the emirates of Sharjah and Umm Al Quwain, and enjoys a coastline of 16 km.

The city was able to achieve economic prosperity due to its strategic location. It has good infrastructure and has become the focus of the attention of investors and capital owners. That led to its urban and cultural advancement and economic growth, as seen in its modern buildings.

The Reason Behind its Name: Ajman

Ajman was given this name because of its most prominent tribe, the Arab Ajman tribe. Another opinion suggests that the reason behind this name is the significant presence of non-Arabs in it, specifically Persians, and any foreigners at the time were called (Ajman).

There is a third opinion that its name was originally Iman, a diminutive of Oman, and was named as such because it is similar in its fertile soil and air to the Omani lands.

The Main Cities in the Emirate of Ajman

The Emirate is divided into three main cities.

Rainfall in Ajman is considered one of the rarities, as the sky is clear most days of the year. The weather in Ajman is characterised by a tropical desert climate, which overcomes this sunny atmosphere throughout the year. Summer is known for intense heat and sunshine, especially in July and August, when temperatures vary between 35 and 42 degrees Celsius.

This is why the best time to visit the emirate for maximum enjoyment of outdoor activities is from early April to early May and mid-October to late November.

Attractions to Visit in Ajman

Ajman includes important attractions and large numbers of visitors and tourists flock to it periodically. It contains the Ajman Museum, Sheikh Zayed Mosque, many hotels, and the Corniche area, which includes many options for Arab and international restaurants and cafes.

Besides having many tourist attractions, Ajman has a strategic location on the coast of the Arabian Gulf. It also has vast landscapes, high mountains, and broad valleys. There are many places for families to shop and entertainment, spread throughout the city, such as Ajman City Centre, Safeer Mall, and many others. In the coming section, we will learn more about the famous attractions in Ajman and what you can do there, so let’s go!

It was built in the late 18th century and was the first line of defence for the emirate. In its construction, local materials were used, such as coral sea stones and plaster, roofed with galvans (tree trunks).

In 1820, the fort, like the rest of the castles and forts in the northern emirates, was bombed by British warships. Consequently, the fort was destroyed before Sheikh Rashid bin Humaid I rebuilt it. After that, successive restorations were carried out throughout the 19th and 20th centuries. It remained the seat of the ruling family until 1907.

Later, it was converted into a museum to showcase the Emirates’ heritage, ancestors’ lives, customs, and professions. It was embodied through unique and expressive statues designed and manufactured with high precision and craftsmanship.

Ajman Corniche, from the Kempinski Hotel to the roundabout separating the emirates of Sharjah and Ajman, is filled with many tourist facilities built according to a diverse architectural style.

The Corniche witnessed the opening of many luxurious 5-star hotels overlooking the waters, forming a turning point in Ajman’s tourist path. When you visit the Corniche, you can enjoy the atmosphere and the fresh sea breeze while relaxing under one of the wicker umbrellas and palm trees spread along the Corniche.

Al Murabaa Tower is a famous attraction on the Corniche of Ajman. It was built in the thirties of the last century under the guidance of Sheikh Rashid bin Humaid Al Nuaimi, Ruler of Ajman. Al Murabaa Tower was the first line of protection for the Emirate of Ajman for more than 80 years. The tower was built to protect Ajman from any attacks from the southwest. Also, it provides security for the city’s residents and prevents criminals from attacking the city’s outskirts.

Al-Hajar Mountains are located in the Masfout area of Ajman. The area has seen an increasing demand to be visited by tourists and residents alike for hiking and much more.

It is 120 km southeast of Ajman, about a 90-minute drive from the centre of the emirate. It is a hidden natural gem and one of Ajman’s most important tourist attractions.

Al Zorah Reserve is a sanctuary for birds and marine life with an area of ​​one million square metres of natural mangrove forest and nearly 60 species of birds, including pink flamingos and herons. It has a vibrant ecosystem of mangroves, blue marshes, and sandy beaches.

It is located north of the city and is directly connected to Sheikh Mohammed Bin Zayed Road. The reserve is part of the Al Zorah complex, a new development that features an 18-hole world-class golf course. The project extends along the waterfront with a length of 12 km and an extension of 1.6 km along sandy beaches.

Bin Sultan Mosque was built in 1815 in Masfout by the late Sultan bin Said bin Al-Badwawi. It is the oldest mosque in the region. The mosque was constructed from local materials, such as mud and plaster, with a canopy of palm leaves.

Manama Museum is located inside a fort, highlighting the region’s heritage, architecture, and traditional crafts. It dates back to the 20th century and is 70 kilometres east of the city of Ajman.

The museum consists of seven large rooms displaying a collection of weapons, Bedouin ornaments, and traditional crafts. The fort was built during the reign of Sheikh Rashid bin Humaid Al Nuaimi, who ruled the emirate between the years 1928 to 1981.

It is surrounded by palm trees irrigated by the old Falaj system, where the water from the mountains flows through underground water channels.

Hassa Buweid Tower is located in the plains of Manama in Ajman. It was built as a fortress by the late Sheikh Rashid bin Humaid Al Nuaimi in the form of a tower in the eastern region of the Manama annexe and is accessed by a stone staircase.

The meaning of Buweid is the white stone, and it was also named after the white gravel hill on which it was built. The tower is only 40 years old, but its architectural style is similar to other castles across the country.

City Centre is one of Ajman’s largest and most beautiful shopping malls. The complex contains a large group of high-end shops that offer local and international products for everyone. There you will find various products, such as clothes, bags, perfumes, jewellery, watches, modern electronic devices, and many other products with different prices.

Ajman City Centre also offers a lot of entertainment places for young children to enjoy playing, watching entertainment shows, and doing different activities. This is in addition to the availability of restaurants that offer delicious meals and food to suit all tastes, cinemas, and distinctive cafes, providing the best tourist services.

Safir Mall is in a beautiful strategic location adjacent to Ajman University in the Al Nuaimiya. The mall is located in an area of 220,000 square metres and contains four main stores.

You will find many stores selling all your home needs and food products of all kinds, restaurants, playgrounds, and family entertainment centres. When you go shopping at Safir Mall, you will have a wonderful time and not feel the time pass you by.

The famous fish market contains the best types of fresh fish, and many people meet there on a daily basis to bargain with sellers over different types of grouper, Shaari, kingfish, Safi, Zubaidi, Al-bayah, Al-khabat, Kabab, Taban, and other types preferred by the people of the country and its residents.

The Red Fort, which got its name from the red cobblestones and plaster used in the construction of the walls, consists of four rooms and two towers. A complete restoration of the fort, which was built during the reign of Sheikh Humaid bin Abdulaziz Al Nuaimi, was carried out in 1986. Trees surround the fort, while a picturesque well close to the building provides drinking water.

Masfout Castle is on a mountain top in the Masfout region in the north. The castle was used to protect the area from enemies and is still standing tall and steadfast today, reflecting the people’s old defence methods in that period.

The castle was also used to protect the area from enemies and bandits heading to the Sultanate of Oman. It was built of stones, mud, and local wood, consisting of two rooms and one gate. At the end of 1940, the tower-shaped castle was renovated at the request of the late Sheikh Rashid bin Humaid Al Nuaimi.

The shipbuilding industry is one of the industries that became famous in the country and the Arab Gulf countries. It constitutes a maritime heritage that the people of the Emirates, and especially the people of Ajman, are proud of.

It was newly discovered in 1986 during underground construction work to develop the city’s infrastructure, and this area attracts lovers of antiquities, history, and culture from all over the world. Many of the antiquities discovered here were placed in the Ajman Museum.

Travel On a Budget: Top Cheap Things To Do In London