Close X
Home/Eastern Mediterranean Region/Abydos: The City of the Dead in the Heart of Egypt 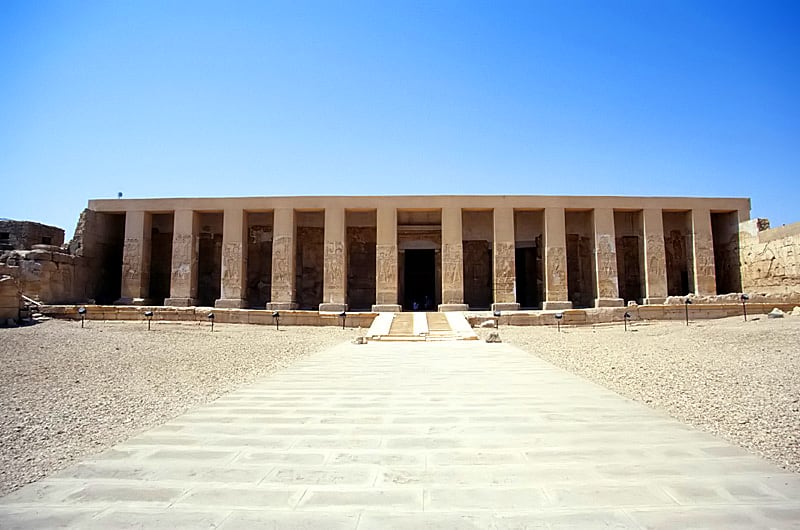 Abydos is one of the oldest cities in Egypt with a history that dates back to ancient times. It is located 11 kilometres from the towns of El Araba El Madfuna and El Balyana. It is considered one of the most important archaeological sites in Egypt, as it is a sacred site that was the site of many ancient temples where pharaohs were buried.

Abydos’ significance today is due to the memorial temple of Seti I, which contains an inscription from the Nineteenth Dynasty known as the Abydos King List; a chronological list showing cartouches of most dynastic pharaohs of Egypt. The Abydos graffiti, which is made up of ancient Phoenician and Aramaic graffiti, was found on the walls of the Temple of Seti I as well.

Throughout the history of ancient Egypt, burial sites differed in location, but Abydos remained a prominent city for burials. Most of Upper Egypt was unified and ruled from Abydos from 3200 to 3000 BCE.

Many tombs and temples belonging to rulers were excavated at Umm El Qa’ab in Abydos, including that of King Narmer (c. 3100 BCE), the founder of the First Dynasty. The reason it has so many monuments from different periods is that the city and cemetery continued to be rebuilt and used until the Thirtieth Dynasty. The pharaohs of the Second Dynasty specifically rebuilt and expanded the temples.

Pepi I, a pharaoh of the Sixth Dynasty, constructed a funerary chapel that evolved over the years into the Great Temple of Osiris. Abydos then became the centre of worship for the Isis and Osiris cult.

King Mentuhotep II was the first to build a royal chapel in the area. In the Twelfth Dynasty, a gigantic tomb was cut into the rock by Senusret III, attached to a cenotaph, a cult temple, and a small town known as Wah-Sut. During the Eighteenth Dynasty began, Ahmose I also built a large chapel as well as the only pyramid in the area. Thutmose III built a larger temple, as well as a processional path leading to the cemetery beyond.

During the Nineteenth Dynasty, Seti I built a temple in honour of the ancestral pharaohs of the earlier dynasties, but he did not live long enough to see the product and it was finished by his son Ramesses II, who also built a smaller temple of his own.

The last building to be built in Abydos was the temple of Nectanebo I (Thirtieth Dynasty) during the Ptolemaic era.

Today, Abydos is a must see when planning a trip to Egypt.

As one of the most historical sites in Egypt, Abydos has a wide variety of monuments to visit.

Temple of Seti I

The Temple of Seti I was built of limestone and is made up of three levels. It contains around seven sanctuaries in the inner temple to honour many of the gods of ancient Egypt, including Osiris, Isis, Horus, Ptah, Re-Harakhte, Amun, in addition to the deified Pharaoh Seti I.

When you enter the temple complex, you go through the First Pylon, which leads into the First Courtyard. The First and Second Courtyards were built by Ramses II, and the reliefs featured there honour his reign, the wars her fought, and his victories in Asia, including the Battle of Qadesh against the Hittite armies.

The First Courtyard leads you to the Second Courtyard where you’ll find inscriptions of Ramses II. On the left wall is an inscription detailing the completion of the temple with Ramses surrounded by several ancient Egyptian deities.

Some of the reliefs in this hall depict Seti I surrounded by gods as Osiris sits on his shrine.

Seven sanctuaries adjoin the Second Hypostyle Hall, the middle of which is dedicated to the god Amun, dating back to the New Kingdom. The three sanctuaries on the right are dedicated to Osiris, Isis, and Horus; and the three on the left were built for Re-Harakhty, Ptah, and Seti I.

The roofs of each chamber are inscribed with the name of Seti I, while the walls are covered with colourful reliefs depicting the ceremonies that took place in these chapels.

The Second Hypostyle Hall leads to the South Wing which contains the Sanctuary of Ptah-Sokar, the god of death of Memphis. The wing is decorated with reliefs depicting Seti I as he worships Ptah-Sokar.

The south wing also includes the Gallery of the Kings, with the famous Abydos Pharaoh List, which has given us important information on the chronological order of Egyptian rulers.

The relief mainly depicts Seti I and his son, Ramses II, revering their royal ancestors, 76 of whom are listed in the two upper rows.

An area that where visitors are not allowed to enter, however, lies to the west, where the royal tombs of the earliest dynasties can be found, along with the sacred Tomb of Osiris.

A monument of Seti I is located southwest of the Temple of Seti I. This unique monument was discovered in 1903 and excavated between 1911 and 1926.

The monument is made up of white limestone and reddish sandstone. While it is closed to the public, you can catch a glimpse of it from the back of the Temple of Seti I.

The Temple of Ramses II is dedicated to Osiris and the cult of the dead pharaoh. The temple was constructed of limestone, red and black granite for the doorways, sandstone for the columns, and alabaster for the innermost sanctuary.

The mural decorations are some of the best-preserved paintings in the first court depicting a sacrificial procession.

The reliefs on the outside of the temple are among the finest produced in the reign of Ramses II and depict scenes from his war against the Hittites.

It is one of the most inspirational monuments in Egypt.

Aside from the fact that it was an official burial ground for the Kings and nobility of ancient Egypt, Abydos contains a wealth of ancient Egyptian monuments that cannot be found anywhere else.

Abydos also contained the main cult centre of Osiris where his head was believed to rest and it became a site of pilgrimage during ancient Egypt.

Abydos can be easily visited from Luxor and is perfect for a day trip to enjoy all the area has to offer and see it in all its glory.

If you’re planning a trip, why not check out our recommendations for off the beaten track destinations in Egypt.

Abou al-Haggag Mosque: The Mosque inside an Ancient Egyptian Temple

6 Things to Do in Al Arish