Abou al-Haggag Mosque: The Mosque inside an Ancient Egyptian Temple 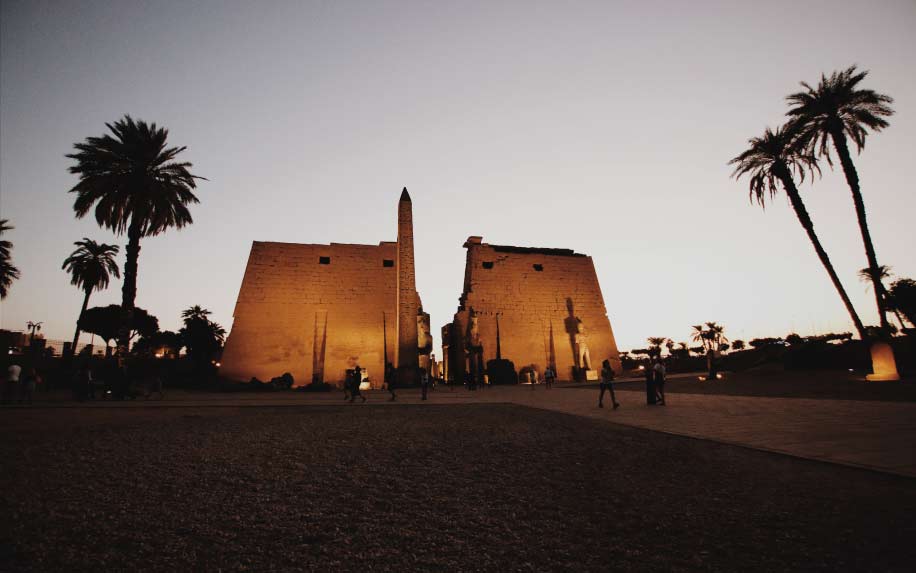 All over Egypt, there are clear signs of how this country was a meeting point and melting pot of many different civilizations and cultures, but none more so than Abou al-Haggag Mosque that can be found within the magnificent Temple of Luxor.

Abou al-Haggag was born in the early sixth century AD in Baghdad during the reign of the Abbasid Caliph Al-Muqtafi Amr Allah. He belonged to a dignified family, well-off, known for piety and righteousness, and his father held a high position in the Abbasid state.

Then he returned to Luxor and met Sheikh Abd al-Rahim al-Qana’i (the owner of the famous mosque in Qena), and he lived and settled in Luxor until his death in the year 642 AH (December 1244 AD) during the reign of King Najm al-Din Ayyub at the age of over ninety years, and was buried in a mausoleum inside the mosque named after him that was built over the ruins of the Luxor Temple.

Abou al-Haggag was known for his extreme piety and his great knowledge, and students came from all over the world to benefit from his vast wisdom.

A celebration is held for him on the 14th of Sha’ban every year, and this celebration includes customs and traditions dating back to Pharaonic times and similar to the rituals of the ancient Egyptians’ celebration of the god Amun.

People go out to the courtyard of the Abou al-Haggag Mosque in Luxor and then to the streets of Luxor, chanting religious songs, reciting the Qur’an, practicing tahteb, stick dancing, horse dancing, and riding camels covered in colorful embroidered cloth.

How Abou al-Haggag Mosque was Built

Abou al-Haggag Mosque contains many manifestations of the Pharaonic civilization from columns, statues, inscriptions, and drawings that are still vibrant to this day, in addition to remains of an ancient Coptic church that disappeared under the mosque.

Its construction dates back to 658 AH, corresponding to 1286 AD. More than 8 centuries have passed since its construction, and it has turned into a building of great historical and archaeological value, attracting tourists from all over the world.

It is built on the northeastern side of Luxor Temple and follows the style of the ancient Fatimid mosques, in the shape of a square covered with a dome, and its main entrance is located on the western side. Many renovations took place in the mosque during the Ayyubid, Mamluk, Ottoman, and modern eras.

Its entrance is 12 meters high, devoid of the geometrical decorations known in Islamic architecture, and is topped by red brick balconies.

Its most distinguishing feature is that it contains columns, rafters, and inscriptions similar to the Luxor Temple. They were discovered by chance after the mosque was exposed to a fire. The restoration workers discovered the presence of ancient Pharaonic-style columns buried in the mosque, and it turned out that they were part of a huge Pharaonic temple covered by a hill of dirt.

The minaret of the ancient mosque is one of the oldest and most famous minarets in Egypt. It dates back to the era of Abou al-Haggag. It consists of 3 layers, the first is square, the second and third are cylindrical, and In the end, is a group of windows and openings. It is built with mud bricks, and the lower square part is reinforced with wooden columns, and its height is about 14 meters.

The mosque had several expansions, and it was restored in the early twentieth century, and during the first half of the same century, a new mosque was established in the same style next to the old mosque. In 2009, restoration work on the mosque ended, which lasted two years, and took place under the supervision of the Supreme Council of Antiquities, and its cost amounted to 7 million pounds, including expanding the prayer hall, strengthening the dome, and changing the roofs, after the mosque was exposed to a fire in 2007.

Today, it is one of the top destinations in Egypt.

If you’re planning a trip to Egypt, Luxor is a must see.

The city Luxor was formerly named Thebes (the City of a Hundred Gates). It was the capital of ancient Egypt from the twelfth dynasty (1991 BC) onwards, which makes it the most significant city in the country in terms of the number of monuments and antiquities found there.

One of the most prominent monuments in the city is the Luxor Temple. The temple witnessed many generations of pharaohs, each of which added their own touch. It was originally built by Amenhotep III (1390-52 BC) and completed by Tutankhamun (1336-27 BC) and Horemheb (1323-1295 BC) and then Rameses II (1279-13 BC). It saw many different civilizations as evidenced by the granite shrine dedicated to Alexander the Great (332-305 BC) that can be found there as well.

The courtyard of the Luxor Temple leads into a Hypostyle Hall bordered with thirty-two columns. Toward the back of the hall, there are four rooms as well as an antechamber attached to a birthing room, the chapel of Alexander the Great, and the sanctuary.

Luxor temple contains a range of interesting monuments and artefacts. In fact, it is one of the leading historical sites in Egypt. Here are just some of the highlights.

The pylon of Ramses II was discovered in the 1880s. It includes two 24-meter high and 65-meter wide towers with a relief depicting Ramses at the battle of Kadesh with his advisers and generals on the right tower, while he is depicted driving his chariot over the dead and dying enemies on the left tower.

There are also two massive statues of Rameses II at the gate with four statues of the king.

The Court of Rameses II is 188 feet long and 168 feet wide. It includes 74 papyrus columns, with bud capitals and the shrine of Thutmose III to the north, and several standing colossi of Ramses II to the south.

In the eastern corner of the court is where you’ll find the mosque of Abou al-Haggag.

The Colonnade of Amenhotep III has seven pairs of papyrus columns, and reliefs cover its walls featuring the names of Tutankhamun, Horemheb, Seti I, Rameses II, and Seti II. Tutankhamun decorated the eastern walls but Horemheb later erased the name of the young king, replacing it with his own.

During the Feast of Amun, which lasted twenty-four days, the sacred boats of the Theban triad were brought from Karnak into the temple of Luxor where there would be a grand parade with dancers, musicians, soldiers, priests, and the king’s royal chariots. They would have been received at Luxor Temple by the priestesses with flowers and offerings. Later in the evening, the sacred boats would return home to Karnak.

This tradition of holding this procession has continued to this day but is now held every year during the Sheikh Abou al-Haggag Festival.

The Court of Amenhotep III features double rows of papyrus columns on three sides and its northern end was the original entrance to the temple before it was changed due to changes made by successive rulers.

This leads into the Hypostyle Hall, which has four small rooms and an antechamber leading to the birth room, the chapel of Alexander the Great, and the sanctuary.

The Avenue of Sphinxes is over 1.5 miles (3 km) long and it once connected the temples of Karnak and Luxor. It was used once a year during the Opet festival as Egyptians paraded through the avenue with statues of the gods Amun and Mut in a symbolic re-enactment of their marriage until they reached  Luxor Temple where Amun was magically transformed into Min, the god of fertility.

The avenue consisted of around 1,350 sphinx statues along with chapels stocked with offerings, and each chapel had a precise function, such as to cool the oar of Amun or to receive the beauty of Amun.

The construction of the Avenue of Sphinxes began during the New Kingdom and was completed during the 30th Dynasty rule of Nectanebo I (380-362 BC). It was also renovated by Queen Cleopatra (51-30 BC) and later used by the Romans.

Visiting Luxor is sure to be a magical experience, but especially the Luxor Temple and its many monuments that best exhibit the mix of cultures and civilizations that have passed through Egypt throughout its long history.

If you’re planning a trip to Egypt, take a look at our top places to stay near Luxor.