Close X
Home/The Americas/A Guide to Cuba: Where to Go and What to Do

A Guide to Cuba: Where to Go and What to Do 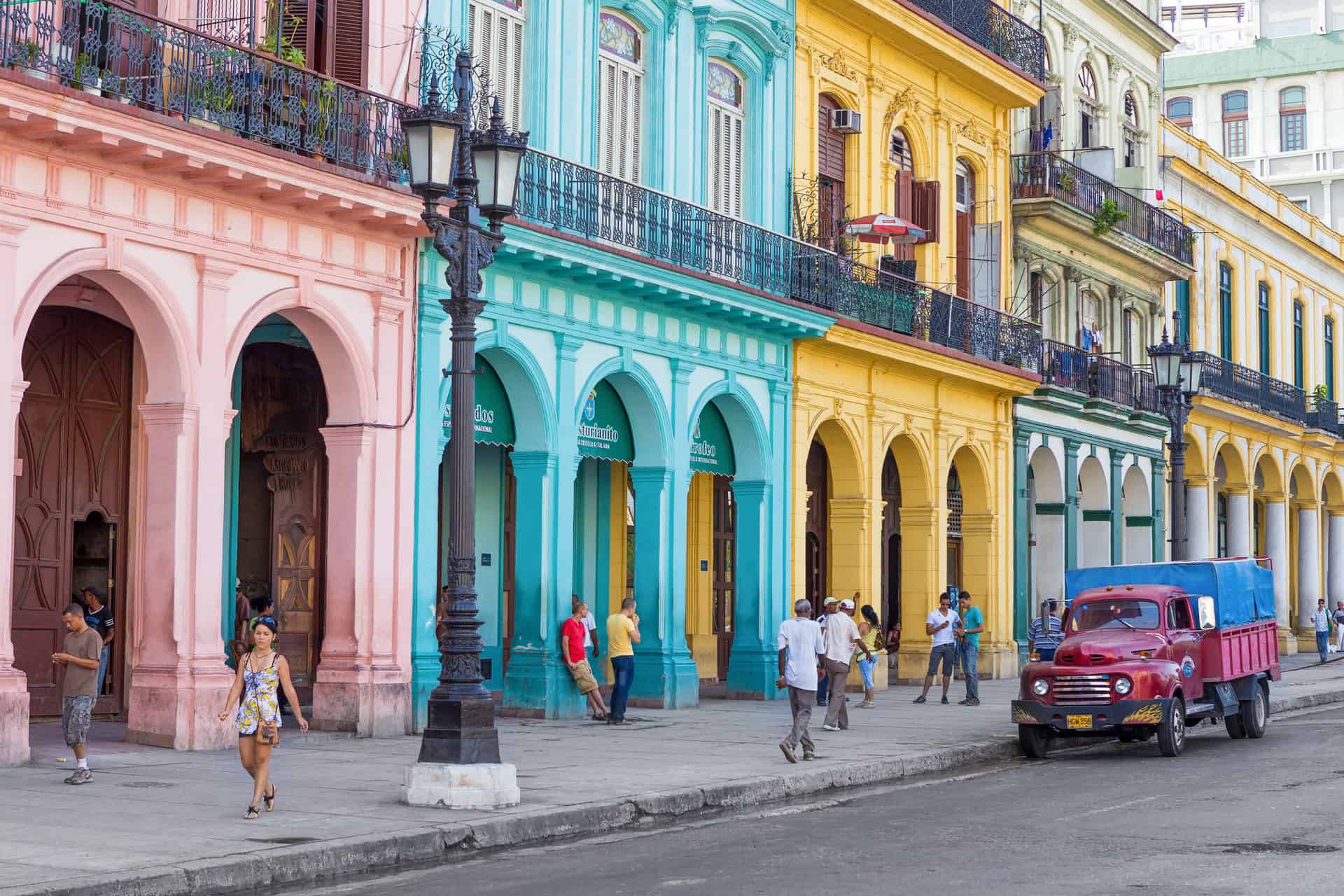 Cuba is located in a geographically strategic place, in the area between the three American continents, namely the North, Central, and South in a region called the Caribbean at the entrance to the Gulf of Mexico. Havana is the capital of Cuba and the largest city in the country followed by Santiago de Cuba.

Cuba consists of one large island with several small islands and is located in the northern Caribbean Sea. It is the largest country in the Caribbean, and Spanish is the country’s official language. The name Cuba is taken from the language of the indigenous people of Cuba, and the word Cubao in this language means ‘where the fertile and abundant lands are’.

The island was discovered by Christopher Columbus in 1492 and after that, it became Spanish contiguous and then Cuba became independent in 1902. Tourism in Cuba is one of the best places to spend your vacation in the Caribbean because it is rich in natural beauty, ancient history, and impressive culture.

The climate in Cuba is considered moderate due to the winds that blow from the northeast. The period from November to April is the driest in the country, and the temperature ranges between 21 and 27 degrees.

Things to do in Cuba

Its privileged location has made it the focus of attraction of tourists from all over the world. Cuba has many distinctive beaches and magnificent architectural buildings erected during colonialism. There are also many restaurants, resorts, and hotels that attract tourists.

In the coming part, we will get to know more about the famous places in Cuba, the things that you can do there and activities you can also try. Let us start our trip to one of the most beautiful countries in the Caribbean.

Old Havana is a well-preserved piece of Cuban history, it is a UNESCO World Heritage site and while you are walking through the streets you will see the cobbled streets, lovely Baroque and neoclassical buildings that make you imagine how life in Cuba was from 200 years ago.

Among the famous attractions located there is the military fortress, Castillo de la Real Fuerza, and there is the Plaza de la Cathedral which is the home of San Cristobal Cathedral. Also while touring in Havana you will see Plaza Vieja which is home to some outstanding buildings like the 18th century Casa del Conde Jaruco.

Trinidad is another UNESCO World Heritage site town, where you will see restored buildings and cobblestone streets in the city center and most of these buildings date from the 17th to the 19th centuries. Trinidad is also considered as one of the best cities to visit in Cuba and you can visit the Plaza Mayor which is the central square and it includes the Church of the Holy Trinity.

Another attraction that you can see in Trinidad is the Church and Monastery of Saint Francis with its beautiful bell tower, the Museum of Colonial Architecture, and the art gallery at the Casa de Aldeman Ortiz.

The National Museum of Fine Arts is one of the perfect places to visit especially for art lovers and it includes many collections of international and Cuban arts. When you are at the museum, you will see that the collections are located in two buildings and there you will find works from ancient days to the present day.

The museum displays many international arts like European Masters, also ancient works from Greece, Egypt, Italy, Asia, the United States, and much more. There is also the Rationalist-style Palacio de Bellas Artes building that displays collections of Cuban Art from the 17th century till now.

One of the best things that you can do in Cuba is going to one of its magnificent beaches spread all over the island and Varadero is one of the famous beaches in Cuba. When you are there you will be delighted about its white sands and crystal water and there are more than 50 hotels lined up in this lovely place.

Varadero also includes other attractions like Varadero Ecological Park and two caves which are Cueva de Ambrosio and Cueva de Musulmanes. The Parque Josone includes flowers, a restaurant, a swimming pool, and a lake, and it is a perfect place for families to spend a great time.

Baracoa is the oldest city in Cuba, it was founded in 1511 in the province of Guantanamo and it started with a church constructed at that time. Baracoa attracts many tourists just to see spectacular architecture and countryside, where there are waterfalls and beautiful beaches.

The El Yunque peak provides a tropical beauty, hikers can also reach the 589-meter summit and see a magnificent view from the top. Also on the hillside, there is a UNESCO Biosphere Reserve, where you can find rare birds and planets.

Paradise Beach is one of the best and most famous beaches in Cuba, it is located on the island of Cayo Largo del Sur with white sands and a lovely blue sea. It is also a perfect place for sun-seekers with a dry and sunny climate.

This is one of the important attractions in Santa Carla and all of Cuba, Che Guevara is considered as one of the symbols of Cuba and the site where his mausoleum was located was the place where the last guerrilla battle led by him in 1958.

This is the place where Guevara is buried, when you visit the mausoleum you will see his final letter to Fidel Castro etched on the bronze statue of Che Guevara in the Revolution Square. Besides the mausoleum, you will find the Historical Museum of the Revolution, which displays personal items of Guevara.

The Castle of San Pedro del Morro is a UNESCO World Heritage Site, it was built in the 17th century and is located in the Bay of Santiago and not far from the city of Santiago the second largest city in Cuba after Havana. The castle was built to protect the place from pirate attacks and then it became a prison and it later became a fortress once again.

Inside the castle, you will find a museum that shows you more about the pirates and the history of the castle.

A beautiful natural place that you can visit Cuba, it is not far from Trinidad town and these waterfalls flow into some green jungle pools.it is a perfect place to spend your day in the arms of nature.

El Nicho Waterfalls puckers along a river with a tropical forest to the waterfalls and there you can swim and have a sunbath. Also there you will be able to see the tocororo and it is Cuba’s national bird. You will see many beautiful things around you whether it is trees or valleys and don’t forget to take some unforgettable pictures there.

The Malecon in Havana

The Malecon was built in 1902 and it is a famous seafront promenade, where you can walk through it and discover the history of Cuba and it is seven km running from the Habana Vieja quarter to the Vedado which is known as the business center.

While you are walking you will see many lovely buildings from the 20th century that are a mixture of architectural styles like the Neo Moorish and they are painted in pastel pink and yellow and that is a nice place to take many pictures.

The Revolution Square is a famous spot to visit in Cuba, it is the place where Fidel Castro made his speeches, and also Pope John Paul II had a great welcome in that square.

When you visit the square you will see a 109-meter gray tower standing in the middle and it is a memorial to the Cuban national hero, Jose Marti. There is a white marble statue of Marti that lies at the base of the tower and below it, there is the entrance of the Jose Marti Memorial.

The Military Historical Park includes two famous fortresses which are the Castle of the Three Kings of Morro and known as El Morro and the Fortress of San Carlo. The El Morro Castle was built in the 16th century to defend the lands from pirate attacks.

The lighthouse there was replaced with a stone in the 19th century but it still has the original lamp that lights the sea until today and from the top of there, you can have a beautiful view of the sea and the city.

The second fortress is the Fortress of San Carlo, which is near El Morro Castle and was built in the 18th century. It is considered as the largest fort Spain ever built, it was used as a prison before then became the headquarters of Che Guevara after the revolution.

Guradalavaca is located in the Holguin province, there you can see lush foliage fringes the sweeping stand of beach here that gives you shades from the tropical sun. There you can do many activities like diving and snorkeling and you will discover the beauty of sea life.

From Guradalavaca you do many trips like sailing, jungle adventures and tours in the near city of Santiago, and also the Dolphinarium near the island of Cayo Naranjo where you can see the dolphins much closer.

The Vinales National Park is located in the Sierra de Los Organos north of Pinar del Rio, it is a UNESCO World Heritage Site and there are limestone hills that create a magnificent landscape. Also, you will find some agricultural areas where vegetables and fruits are grown, and you can try horse riding and hiking.

Things to do in Bahrain, the Pearly Beauty