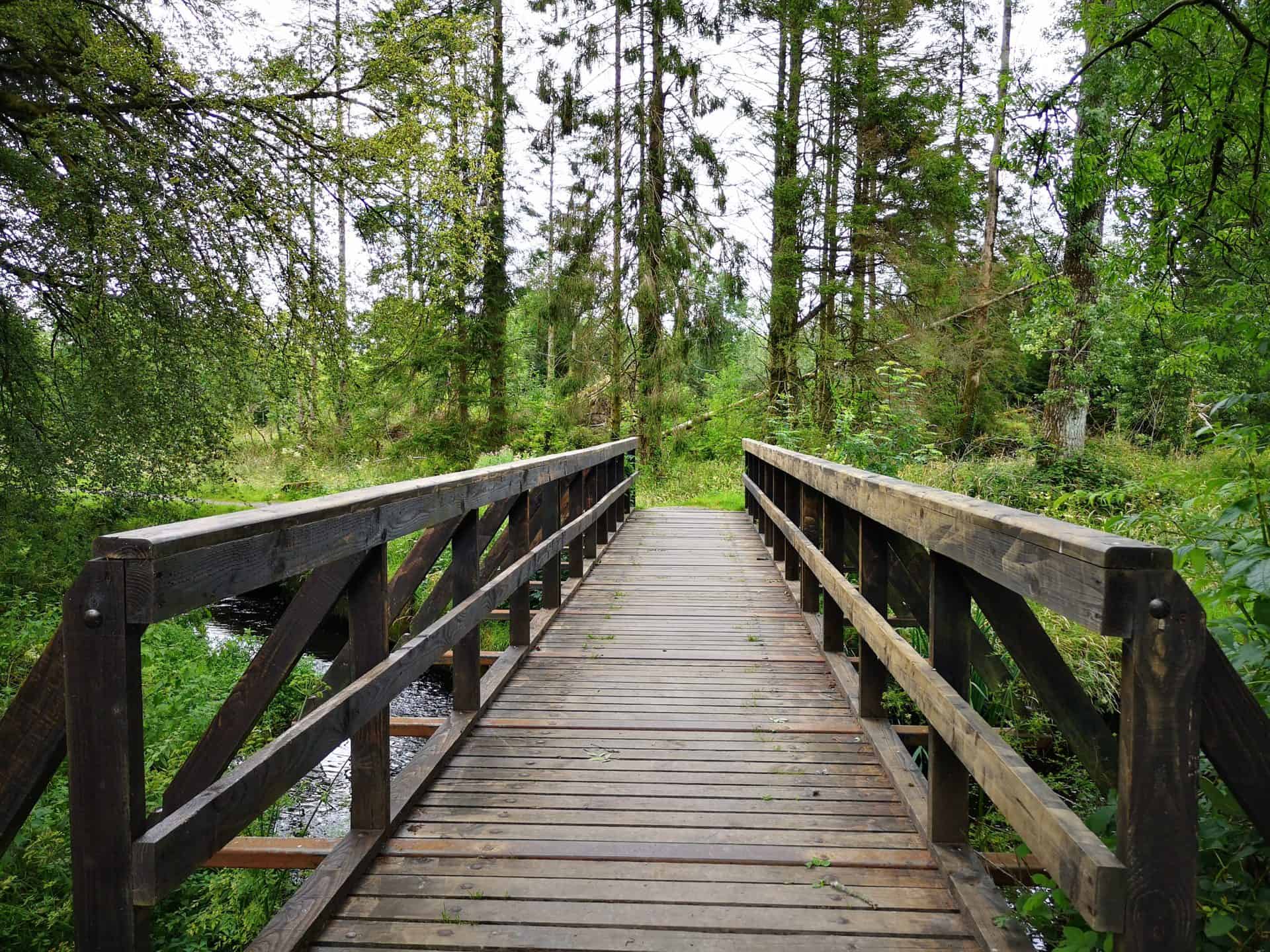 Famous for its lush green landscape and breathtaking views, the entire island of Ireland is a hiking paradise. From steep mountains to sandy beaches, it is easy to find exciting paths and trails to walk and hike. Whether you’re an experienced outdoor enthusiast looking for a challenge, a newcomer to hiking, or simply looking for a fun day trip, our list of trails and parks throughout Ireland will make you excited to get your daily steps in!

The Causeway Coastal trail takes the average hiker about 2-3 days to complete in full. This trail leads travelers through two popular tourist towns: Ballycastle and Portstewart. Furthermore, if you walk the trail in full, you will be taken to some of Northern Ireland’s largest tourist attractions, including the Giant’s Causeway and Carrick-a-Rede Rope Bridge.

This trail follows the coastline, which makes it easy to navigate for beginners and casual hikers. Travelers must be cautious, however, because some of the trail follows the road and it is important to stay alert. Other sections of the trail include beach walks and cliffside paths. No matter your hiking skill level, the stunning coastal views of this path will blow you away.

Located in County Sligo, Deerpark was originally designated as a deer enclosure for hunting. Today, the park is a scenic location for hikers, with touches of history throughout its pathways.

The focal point of Deerpark is the Ancient Court tomb, also known as Magheraghanrush, which is a recognised national monument. The tomb was built around 3000 BC and it is believed that the eastern section of the tomb was an addition made as a result of a merger of two social groups. Inside the tomb, both animal and human remains were found. The human bones are estimated to have been from as many as 10 people from the group. The court tomb loop in the park is just over 2 miles long, making it a great path for beginners and seasoned hikers alike.

If you find yourself at Deerpark, make sure to take the scenic route, as this park is located right near the Wild Atlantic Way!

Located on the River Shannon in County Limerick, Foynes covers over 17 acres of woodlands. In the past, Foynes was a part of the Monteagle Estate, which expanded over 6,500 acres! Some parts of the estate, including stone walls, the Lady’s Gate, and carriage paths, can still be found on the property today.

While this park may be on the smaller side, there is still a lot of history and beauty on its grounds. During World War II, Foynes was used as a landing ground for transatlantic flying boats, such as the Yankee Clipper, which flew from Southampton to New York. Some life-sized replicas of these planes can be seen at the Foynes Flying Boat Museum. During this time, many famous people flew these planes, such as Charles Lindberg and American First Lady Eleanor Roosevelt.

Gosford Forest Park was obtained by the Forest Service in 1958. Since then, this park has become a family-friendly attraction in County Armagh for walks, hikes, and fun. This park expands over 240 hectares and has multiple facilities for attractions and lessons in history.

Gosford Forest Park has trails for walking, cycling, and even horseback riding. With new signs and map displays throughout the pathways, navigation is simple and the facilities are easy to find. Also at this park, there are caravan and camping facilities, as well as a play park for children. These all make Gosford Forest Park an ideal getaway location for a weekend spent in nature.

Not only is Gosford Forest Park a beautiful location, but it also has a lot of history on its grounds. Visitors can visit the arboretum, which contains a variety of tree species from around the world. Many of these trees are over 150 years old! Guests can also see the original water wheel that was used to power the facilities before electricity was commonplace. Next to the water wheel, you can also find the home to the Earls of Gosford, Clonkearney Manor. The original home was burnt by fire during the Irish Rebellion of 1641, but the replacement still stands on the grounds today.

When it was bought in 1910, Ballykelly Forest became the first state forest in Northern Ireland. Since then, over four and a half hectares of trees have been planted throughout the forest. Paths through the forest park range from 0.5 to 2 miles in length, with both linear and looped routes available to guests. This forest park is extremely popular with dog walkers because of its short distance and easy paths. While there are no recreational activity facilities at Ballykelly Forest, guests are encouraged to come enjoy the trails on foot.

The Diamond Hill Loop trail is just shy of 4.5miles long and is located in Connemara National Park. For most hikers, this trail will take about 2 hours to complete. This trail features rocky gravel terrains, steep climbs up the mountain, and the chance to see wildlife on the paths. Due to the terrain and length, this trail is rated as moderate difficulty and is best for those who have some experience hiking. On this hike, you can see Diamond Hill’s beautiful summit and views of distant islands.

The Devil’s Glen was created at the end of the Ice Age when all of the ice sheets melted away, creating the valley. Due to this, the glen features steep rock faces and many different types of trees and greenery.

There are two looped pathways available to hike at the Devil’s Glen. Each path takes about 2 hours to complete for most hikers and both are rated as moderately difficult. The highlight of this hike is the waterfall within the forest. In fact, the waterfall is what gave the forest its name: it has been said that the waterfall’s echo sounded like a “Satanic power announcing some great doom.”