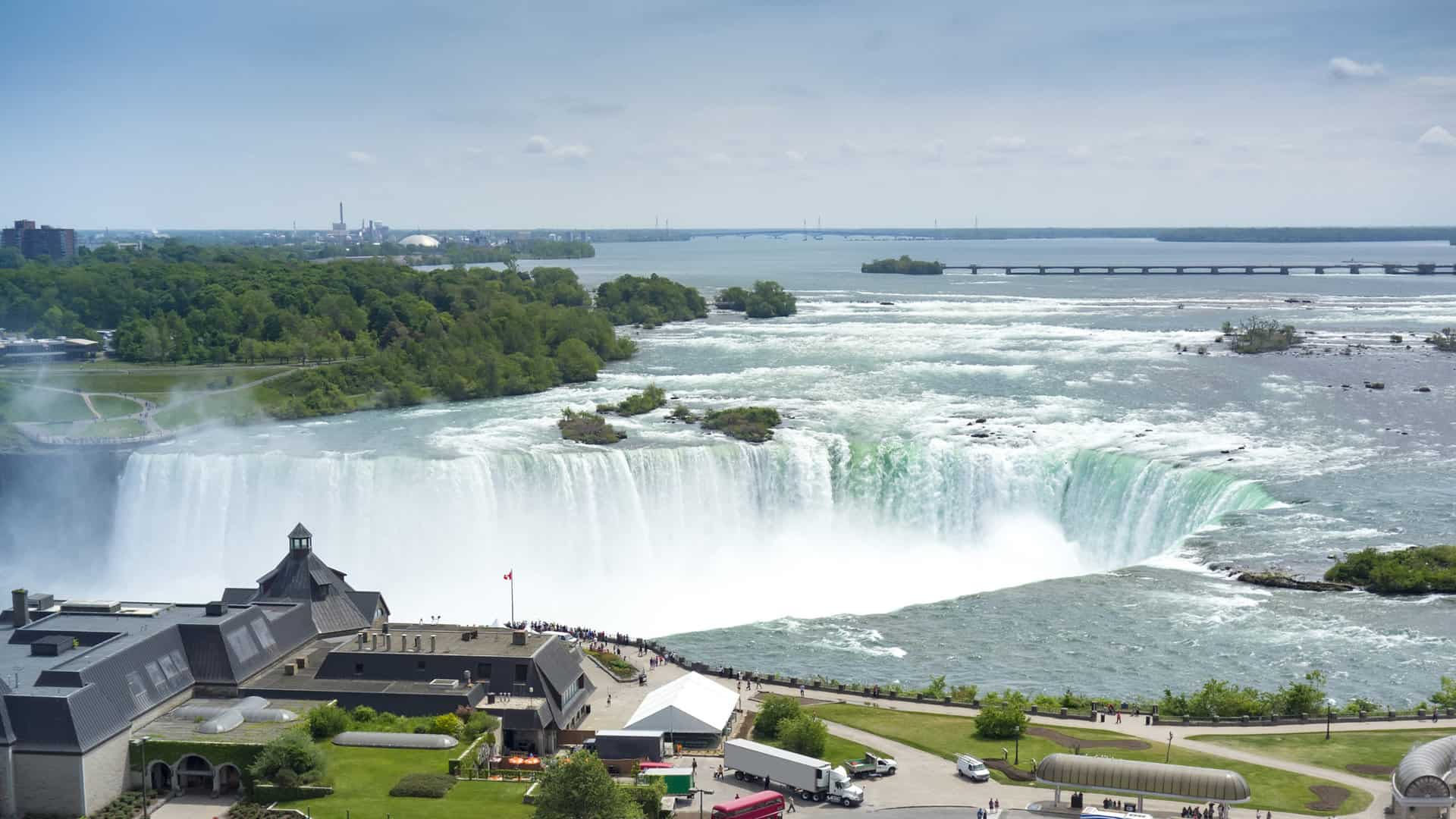 Niagara Falls is the second-largest waterfall in the world. It is located on the North American continent, specifically on the common border between New York City in the United States of America and Toronto in Canada.

The falls were first discovered by the Native Americans who inhabited the area. It was documented as an area with distinctive characteristics when a Belgian priest named Father Louis Heinen visited it. He then mentioned all this in his book titled A New Discovery. This book has inspired many people to visit the place.

Since the 19th century, the falls have become a tourist destination, and a railway system was developed there. It is believed that the name Niagara is derived from the indigenous people of the area.

Niagara Falls was formed during the era of glacial immersion in Wisconsin. The passage of glaciers over the region created holes in the rocks and formed new terrain. The Niagara River is the most important thing in this area. After the formation of the Niagara River, its water became subject to freezing and melting annually. This revealed the erosion of the rocks as they began to fall against the direction of the river, and that formed Niagara Falls.

The construction of this station supplied entire cities with electricity for the first time. Heavy industries appeared, and they needed great energy, so Niagara Falls became an important industrial and scientific centre.

There are many general facts that you can know about Niagara Falls, such as:

The Niagara Falls region’s climate is considered mild in summer and cold in winter. The summer season is three months, from May to September, and the temperature reaches 21 degrees and may rise more than that.

In the winter, the weather is freezing and dry and lasts for three months, from December to March, and the temperature reaches 5 degrees and can drop more than that.

Things to do in Niagara Falls

Niagara Falls is an annual tourist attraction with many tourist services that any tourist needs, including hotels, restaurants, and parks. Many consider it one of the natural wonders of the world because of its beautiful landscapes and a great place to spend quality time with the family. You can enjoy doing many things there, such as cycling, fishing, and golf.

In the coming part, we will get to know more about Niagara Falls, things to do there, and places to stay. So, sit back and enjoy!

As we mentioned before, Niagara Falls State Park is the oldest state park in New York. It was opened in 1885, and it has some lovely waterfalls and five islands on the Niagara River. The park has an area of 400 acres of bike trails, picnic facilities, and much more.

The park also has many attractions, such as the Observation Tower. You can see a magnificent view of the three waterfalls from the top of it. There is also the Adventure Theatre, where you can see a 4D presentation that displays films and wonderful effects such as fall spray. Besides that, there are restaurants, gift shops, and exhibits. You can find the waterfalls getting lit at night, and fireworks presentations are held throughout the year.

The Skylon Tower is located above the falls in Canada at 235 metres. You will see a beautiful view of Niagara Falls and the city from the top. The tower also includes indoor and outdoor observation with two restaurants. The first restaurant is called Revolving Dining Room. It is an upscale revolving restaurant. The other one is the Summit Suite Buffet, a mid-range family-oriented establishment.

The Niagara Skywheel is considered the largest observation wheel in Canada. It is a new attraction built at Niagara Falls and is 175 feet tall. The ride in the sky wheel can last from 8 to 12 minutes. You can ride it during the day or at night. If you choose to ride it at night, you can see a spectacular view of the city lights and the Niagara Falls lights.

Before entering the 175-feet cave, the visitor will be provided with sandals and ponchos. There is also a hurricane deck that was named after its constant state of stormy conditions. It is a wooden platform that stands 20 feet from the tumbling water of Bridal Veil Falls.

The Aquarium of Niagara is one of the perfect places to visit there for families. You will find it in Niagara Falls in the New York part. There, you can find more than 200 species of marine animals and also about 30 educational exhibits.

You can have a great time seeing the sea lion show and penguin feeding. Also, you can have a closer look at the animals, especially in caring, training, and many other things.

The Whirlpool Aero Car is one of the oldest things you can try in Niagara Falls, Canada. It is an antique cable car that has been working since 1916 above the rolling waters of Whirlpool Rapids. It is about a 10-minute trip over the Niagara River with a lovely view beneath you. The cable car is about 1 km from one side to the other and takes about 35 people per trip.

Niagara-on-the-lake is a beautiful town located on Lake Ontario. It is just about 20 minutes away from Niagara Falls. The town was built with a magnificent design in the 19th century.

Most of the town was ruined in the war of 1812. After that, the original architecture was rebuilt. When you are there, you can have a tour in horse-drawn carriages through the town streets to see the spectacular buildings there.

The Old Fort Niagara is one of the most important forts of the 18th century that is located in the Canadian part. It is a great place to explore for history enthusiasts. It was used to control access to the Great Lakes during the colonial wars. While you are there, make sure to visit the visitor centre that includes exhibits and artefacts.

The fort also hosts many events all year long, and tour guides are available in-season and off-season as well. We are confident that you are going to enjoy the orientation videos!

The Niagara Parkway is a beautiful place for nature lovers. It is located where it passes through Niagara Falls to Fort Erie, following the gorge. While walking, you will see many green spaces with beautiful sights to stop and immerse yourself in. Don’t forget to take as many pictures as you can!

There are other attractions you can see while walking on the parkway, such as Floral Clock, Whirlpool Rapids, and the Butterfly Conservatory.

Clifton Hill is a famous attraction in Niagara Falls. It is also a part of Niagara Falls’s town and is known as Niagara’s Street of Fun. There, you will be able to see the Niagara sky wheel, Niagara Speedway, family attractions, and restaurants. Kids will love ice cream shops, cotton candy stalls, and many other things.

The Butterfly Conservatory is located on the Niagara Parkway in the Canadian part and includes about 2,000 butterflies. This place is a wonderful closed-glass conservatory with waterfalls and tropical plants, containing more than 40 species of butterflies.

It is one of the perfect places for bird lovers. The Bird Kingdom is considered the largest free-flying indoor aviary in the world. It is also a great place to visit in winter. There, you will see many colourful tropical birds that you will love and you will be able to take some beautiful pictures of them.

It is a short drive from Niagara Falls. The tour starts from Niagara-o-the-lake, and you will go on a wonderful ride through class 5 whitewater rapids. The tour will give you some information about the history and geology of the area. During summer, the tours on the boat are open, while in the fall, the tours are in dome-covered boats.

Maid of the Mist

The Maid of the Mist is the longest-running boat tour in Niagara Falls. It started in 1846 and is one of the famous attractions at Niagara Falls State Park.

The tour takes about 30 minutes to see both American Falls and Horseshoe Falls. You will ride close to the base where hundreds of thousands of gallons of water crash each second. The tour starts from April till November every year.

The Hornblower Niagara Cruises gives you a closer tour of the base of the three falls. The cruise takes about 700 passengers, and it runs all day. It is an excellent experience as it is considered the only boat that tours from the Canadian side and takes the visitors to the fall base.

Places to Stay in Niagara Falls

Most people who visit Niagara Falls might not know that there are many hotels where you can stay and rest from the activities you do and the tours you take all day in the falls. So let us explore some of these hotels.

Best Bars in Ireland, by city: The Ultimate Guide to Over 80 Great Bars